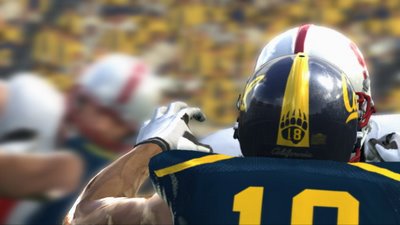 (Another friendly reminder: Lots of posts coming in this week and throughout college football season, so look at the top-left side of the site, click on "Edit Settings", and modify "Number posts to display on front page". We suggest 20-25 to keep up with the pace (and maybe a similar amount with fanposts/fanshots. We know, it's getting craaaazy.)

On a smaller-scale, depth at a position for schools fighting uphill is just as important. Despite losing Alex Mack anchoring the center position, I said I wasn't that worried about Cal's offensive line this season. Likewise, despite losing three of our four starters on the linebacking corps, of all the defensive units, I might be the least concerned about this one.

The reasons are the same for each: Depth. The Bears run six-seven deep in these two places, and should be okay if anyone (as they're likely to do) goes down.

What do you think of Cal's linebackers this season, did we step down or step up? Who will be the next pass rusher for the Bears in the mold of Follett? Is Mike Mohamed capable of becoming Cal's greatest linebacker of the Tedford era?

Part of the reason we can get by is the non-hierarchical nature of the defense. On offense, there is a command center (quarterback) and almost everything feeds back from that; on defense everything integrates and intersects, with the edges (d-line and secondary) requiring greater strength than the center. If one unit struggles, that doesn't mean the entire defense falls along with it. And although we can't underestimate how important having good linebackers, it's a more fungible area than either the D-line and secondary.

Did you understand any of that? Probably not. Bear Will Not Quit explains it better.

There are two other reasons I do not think LB will be as big a dropoff as people think. First, the rest of the defense is stacked. In terms of areas where weakness can kill you on defense, secondary and defensive line are more critical than linebacker, especially in the 3-4. This team's secondary and defensive line are very good (at least the starters are -- depth will be an issue). That will give the linebackers some protection.

Second, as many have pointed out, this is year 2 in the 3-4, which means these LBs are going to be in full attack mode, much less hesitant, creating more opportunities for sacks, turnovers, and blowing plays up. That can allow this defense to be the aggressors, which will give the linebackers an edge by keeping offenses off balance. For those reasons, I am just not that worried about this position.

Who's conducting the next Pain Train? With Follett gone, perhaps Cal's most glaring need on defense is a pass rushing linebacker from the weakside. Mike Mohamed moving to the outside (a fair pass rusher, but better utilized in coverage) probably means that this issue isn't close to being resolved.

In short, Follett's a tough act to follow on the weakside, and that's beginning to show. For the first two weeks of camp, the Bears had senior Devin Bishop and junior transfer Jarred Price split first-team reps at the position. A few days ago, they shifted junior Mike Mohamed to the outside with the first team and Bishop inside where he will stay for now, according to defensive coordinator Bob Gregory.

"Neither one of them (Bishop or Price) echoes Zack right now," Gregory said Friday. "That's why we moved Mike there -- to see if we can find the right guy for that position."

Mohamed -- who can play all four linebacking positions -- currently gives the defense its most explosive option off the weakside, Gregory said. Cal coach Jeff Tedford said that if the season began today, Mohamed would start on the outside.

Thompson says the switch was also made in part to increase the versatility of all his linebackers and thereby create depth in the group in case a starter is lost to injury. The same thing was done during fall camp last year -- it's just that no starters were lost for a significant period of time during the season so nobody had a reason to notice.

So the search continues. While I did say that Cal shouldn't be overtly concerned about the overall depth of their linebackers, at least this year, they will miss Follett's gamechanging abilities.

For more quotes, check out these additional quotes from Price and Bishop on Extra Points (the Daily Cal football blog). 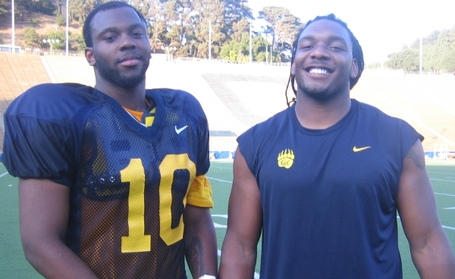 via vmedia.rivals.com (Bishop on the left)

Some people are their fathers' sons. We're our brothers'...uhhh, brothers: There is so much great stuff on Devin Bishop (younger bro of Desmond) and Eddie Young (younger bro of Sean) in this Bear Territory writeup, I'll only include the top stuff. Read the whole thing if you want to feel real relieved about our linebacking depth.

Football is an emotional game and the player leading the charge in that department for the Cal football team is senior linebacker Devin Bishop.

Before every practice, the Bears choose a teammate to lead the squad in pre- and post-practice chants during stretches. So far during Fall Camp, Kevin Riley, Brian Holley and Marcus Ezeff have all earned that honor.

But, there is one player who is chosen everyday to lead a chant. In fact, he has led a chant everyday in practice for the last two seasons. That player is none other than Bishop. The 6-foot-1, 239 pound 'backer is outgoing in everything he participates in, from cheering on teammates, making plays, running sprints and yes, leading cheers.
Bishop not only possesses athletic prowess but also a howling voice. The chants he's led the last two seasons is one where Bishop yells out "Cal Bears!" and teammates respond with a version of "Ahwoo." So far this Fall Camp, Bishop has added another chant.

Everything Bishop does is with high energy and high emotion. That includes playing linebacker.

Young, who racked up 40 tackles and 1.5 tackles for loss last season, is expecting to do a whole lot more this upcoming season. Young is entrenched as the strongside linebacker and is in a battle against teammates such as Charles Johnson, Ryan Davis and Jerome Meadows.

"I'm really working on things that I had trouble with last year," Young said. "Fine tuning stuff I wasn't great at like my pass drops, pass rush, just getting better at all that stuff."

While Young has made big-time improvements since the beginning of his collegiate career, even the cagiest of veterans could use Fall Camp as a way to get better. During Sunday's practice for example, Young received a "talking" from position coach Kenwick Thompson after running back Shane Vereen blew right by Young in the 11-on-11 session.

"My feet were just off a little bit," Young said. "I had the stack and I was outside and he was inside. He ran right where I was supposed to be. It was just a little alignment adjustment that needs to be made."

Additional great stuff on how the two mentor Chris Little, who is likely to see his share of snaps as a redshirt freshman this season.

The reserves: Rivals also talked a little bit about the reserves battle in the Fall Camp report.

# One of the more noticeable issues surrounding the linebacking corps so far is the depth at both outside linebacking positions. After Bishop and Young, Charles Johnson, Jarred Price, Ryan Davis, Solomona Aigamaua, Robert Mullins (Editor's note: Mullins will be out a month to six weeks with an ACL injury) and Jerome Meadows are all competing for the remaining spots.

# In the middle though, things are a little thinner. After Kendricks and Mohamed, D.J. Holt and J.P. Hurrell make up the second team. Fans are familiar with Holt and Hurrell has looked solid. But, Hurrell is technically in his true freshman season, as is fellow middle backup Steven Fanua and Meadows - who also plays the middle - is in his first year as well.

Assuming a decent bill of health, you can see the Bears will have plenty of young talent to back up the frontline. No experience by any means, but they will certainly get their chances down the road.

And if they can't stay healthy? The Cal defense is probably going to be scrambling anyway.