For further discussion on the depth chart, check out this excellent fanpost by dballisloose, who discusses what sticks out from the current release.

The competition at kicker still remains open despite the depth chart (who do you guys think gets the nod?), good health news concerning Michael Calvin, and we have a nice report on Austin Hinder. But first, a pleasant surprise at wide receiver.

Verran Tucker was in a deep hole from the spring onward. But it looks like he's found his way out of it coming back from behind the pack to surge into a starting position aside Marvin Jones. Are you guys satisfied with these two as our starters?

More on Tucker and other news after the jump.

Tucker didn’t know he had been named a starter until a group of reporters informed him after practice.

"I’ve come a long way," he said. "I had to get my academics situated. I’m feeling good. I feel like I have my legs under me. Camp was great. I’m ready for Saturday. I can’t wait to step on the field."

Tucker had an uphill climb after falling to the bottom of the depth chart when fall began. He said the coaching staff never gave up on him.

"The coaches talked to me every practice, giving me motivation, telling me I had to work to get my spot back," he said. "They just kept me motivated."

While the Bears practiced during the spring, Tucker studied in the coaches office. Then he would join the team at the end of practice for conditioning. But he didn’t stop when his teammates stopped. While the rest of the Bears were headed for the locker room, Tucker did extensive extra running with either Tedford or receivers coach Kevin Daft, sometimes to the point of vomiting.

"It just showed me that i have to get my life together," Tucker said.

There's a more complete profile on Tucker's odyssey to starter from the SF Chronicle.

Short tidbit on the receiver front: Calvin should be good to go for Maryland.

Wide receiver Michael Calvin is back at practice after arthroscopic knee surgery and will be available against Maryland. 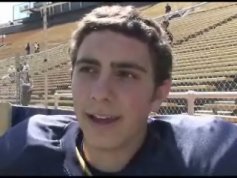 Ciao Giorgio: Although Giorgio Tavecchio has been listed as Cal's starting kicker, it's likely that the final decision on who's kicking off against the Terps won't be made until before the game. Again, from Okanes's report.

"As of right now, Tavecchio would be the guy," Tedford said. "But just because (McRae) forces me to put a depth chart together, doesn’t mean that’s what is going to happen next Saturday. We could change the kicker on Wednesday. That hasn’t been decided yet."

Tavecchio confirmed he hasn’t been told anything about Saturday’s game at this point, and continues to take a diplomatic approach about the competition between him, David Seawright and Vince D’Amato.

"I have 100 percent faith and i believe in Coach Tedford’s judgment," Tavecchio said. "I feel like I’m giving the best effort I can. I’m very happy and satisfied with the way I have performed so far. Of course, there is always room to improve. I hope I’m the kicker. If not, I’ll be the best teammate possible."

The Bear Insider has provided some good complimentary video of Tavecchio's thoughts on the kicking competition, and in addition a link to an interview they did with him on his origins story from Italy to Strawberry Canyon.

The University of California-Berkley commit and Steamboat senior threw five touchdowns, ran for another and had 383 total yards in a 41-21 win. Hinder finished the day 20 of 29 passing for 326 yards and five touchdowns against one interception. He also carried the ball four times for 57 yards and one touchdown.

Here are highlights of the game, including Hinder's spectacular 59 yard touchdown run.

One more high school story: A profile on commit Tevin Carter from the LA Times.

Rivals thinks we have the 6th best defensive line (singling out Alualu), the 5th best offensive line (Schwartz and Tepper getting pub), the 7th best backfield in the country, the best running back duo in the country in Best and Vereen and the 5th best secondary. (EDIT: Thanks to ava1anche69 for figuring out that backfield includes quarterback, explaining the disparity between the backfield/running back rankings)

But the biggest, and maybe most pleasant surprise, is Cal's cheerleaders. Thirteenth??? Nice job ladies. You've made great progress since the days when I was there. 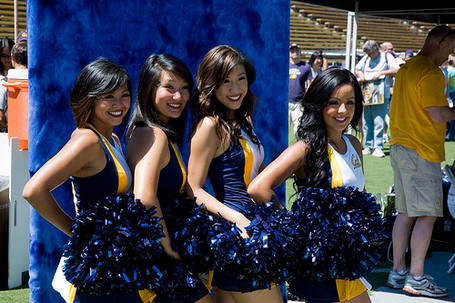 via cdn2.sbnation.com (Thanks to turkey for the photo)