TwistNHook: So many subplots in this one. Revenge for 2007. More than revenge, exorcising 2007. Revenge for 2008. Quizz v. Best. Taking on what could be one of the best teams in the Pac10. Taking on a team that has performed about as good against USC as any other Pac10 team during this decade. Taking on a team that has owned us in recent times, beating us 3 out of the last 4 years, many times in emotionally devastating fashion.

How do you guys see us doing against the Beavs this year?

Avinash: I. Hate. This. Game

TwistNHook: Wasn't that the NBA's tagline briefly before they decided to go in a much, much, MUCH different direction?

Avinash: You're thinking of Russian Roulette.

TwistNHook: I might have been thinking of the Pyongyang X Games!

Ragnarok: For whatever reason, OSU has had our number, winning 8 of the last 10 against us. They're the only Pac-10 team I've never seen us beat in person!

I mean, the Beavers have had a good program for a while, and coaches Mike Riley, Dennis Erickson, and Mike Riley again have done a great job up there, but you'd think the Bears could win one at home once in a while. You'd think.

Avinash: One of the most unheralded people in the conference is Oregon State defensive coordinator Mark Banker, who might be the best assistant coach in the country.

Under Banker, who is as fiercely competitive as any assistant coach in the country, Oregon State has acquired a reputation for producing outstanding defenses and developing NFL draft picks out of high school recruits who didn't get so much as a sniff from USC, UCLA, or the 'big time' schools.

Five players off last season's defense - which ranked No. 2 in total defense behind USC - will likely play in the NFL this year.

"He has a philosophy, and a system he teaches,'' says Riley, who watched Banker's 'gap cancellation' scheme shut down No. 1-ranked USC last season.

"It is very well thought-out, there are building blocks to it, and our kids learn it young and grow into it. I think that's the key to our success.''

It looks like the 2009 Beavers are going to have another good if not excellent defense, which would only add to Banker's resume and give Riley's wife more nervous moments this winter, when the "job season'' starts and heavyweight programs are poaching top assistants.

The goalline stand in 2007 stands out. The five sacks in 2008 plus the numerous hurries on Kevin Riley also count for something. In 2005 Joe Ayoob had his worst game as a Bear by far against the Beavers. Oregon State's defense has probably played us the fiercest in the conference (other than USC of course), and I never relish playing a good defense, much less a good defensive coach. 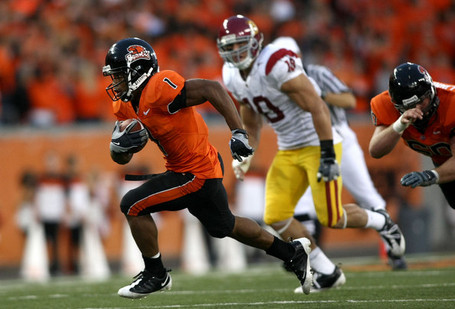 Cal's offensive line will have to do not just a great job of protecting the quarterback. They'll also have to find a way to open up the short yardage game, to beat Oregon State's strategy of closing those holes at the line.

TwistNHook: To be fair, Ayoob had a particularly rough day in 2005, because Tedford benched Marshawn midway through the game to punish him for 2 bad fumbles. With the onus on Ayoob, he was unable to succeed. But having Marshawn in there woulda helped.

HydroTech: Did you know that aside from Oregon and USC, last year Oregon State ranked third in the Pac-10 for average yards per game? One might chalk that up to the Quizz or Jizz or whatever his name is, but surprisingly OSU only averaged 158 yards per game on the ground last year (6th in the Pac-10). They were second in the Pac-10 in passing last year with 249 yards per game. I find that surprising. When I think of Oregon State offense, I don't really think of them getting that yardage through the air, but apparently they were a pretty successful passing team last year - much more successful than I remember. Regardless of who is their QB, they are going to have to cut down on INTs. Last year they pitched 15 INTs which is far too many but not as bad as UCLA's and WSU's 21.

TwistNHook: They had a similar QB situation to ours last year with some back and forth. Does Movawiegfawhgoi have the inside track on the job this year?

Yellow Fever: For what it's worth, Scout.com has Canfield listed as the no. 1 as of 8/6/09. Although I thought I read a report a while back saying Moevao was no. 1. Who knows.

Ragnarok: Well, regardless of who is No. 1, Canfield will be getting the start, as Moevao is still recovering from shoulder surgery. He'll be ready to go sometime this season.

Avinash: Other than Oregon State's D, what should worry us the most is the Rodgers brothers. How far OSU goes on offense will depend on the health of Jacquizz and the abilities of James.

First of all, the man hasn't taken a hit in a long time. And doesn't it have to worry you that the hit he took in the Arizona game wasn't even that violent? Look, Quizz is a tough runner, and not much is going to slow him down... unless he comes up with a nagging injury, like a shoulder, that's going to keep him out of games. His between-the-tackles running style isn't quite condusive to staying healthy, but we saw him take hits time and time again in the first part of last season, and be perfectly fine.

Look, the Beavers are a running team. They want to give Quizz the ball. In 2008, the Beavers ran the football 37 times per game. In 2007, the final year of the Yvenson Bernard era, the Beavers rushed the ball 42 times. Bernard played in 11 games, carrying the ball an average of 25 times per game. In 2008, in the 11 games that Jacquizz played in, he carried the ball an average of 24 times per game. So obviously, Jacquizz can take a heavy chunk of the ballcarrying and still produce results. I don't really think stamina or endurance is a question. It's just a matter of fighting through taking hits all games long, which I believe he can, unless he just takes a medoicre hit in the wrong place, like last year at Arizona. But you have to think that Pac-10 defenders will try to tee off on his left shoulder.

Long story short: I'm not worried about Quizz's durability, or worried about him having problems "getting up" after being knocked down 30 times per game. I think the hit he took in the Arizona game was an anomaly, but it's still going to stick out in my mind moving forward.

James Rodgers, OSU's stud flanker, has battled a minor knee injury (just a bruise, we hear) throughout camp and missed some practices, but it's nothing that should be long term. Everything we've heard points to both Rodgers' brothers being stronger and faster this season... as if they weren't fast enough already. Expect him to only improve this year, if he can stay injury-free, and help to fill the Sammie-void.

TwistNHook: "unless he comes up with a nagging injury, like a shoulder"

Where's Bill Simmons when you need him! 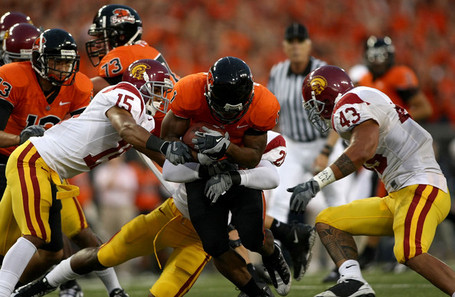 Ragnarok: I wonder what would cause such a disparity. Are some fumbles more likely to be lost than others? Did OSU's QBs fumble the snap alot or something?

Avinash: Best lost some fumbles downfield right? Whereas Oregon State's offense was more of a traditional plug and chug sort of thing, so I'd guess more Beavers were around the football when the ball came loose, allowing for a higher probability of OSU recovering the football than with Cal, who had Best chased down by about six-seven defenders.

But I'd guess for the most part it's sheer randomness. Like most fumbles.

Yellow Fever: Anecdotal evidence would probably yield some kinds of fumbles that are more easily recovered by one side or the other (like fumbles lost downfield amidst a swarm of defenders) but I've never seen any kind of comprehensive study about recoveries of different types of fumbles. I would think that for the most part they're split about 50/50 because in any fumble there's always going to be at least one player from each team present (the fumbler and the fumblee...is that a word?), so there's that.

TwistNHook: So, who do you think is going to win this one? I say Cal 9-2