Share All sharing options for: Learn more about the UC Cannoneers Part 2 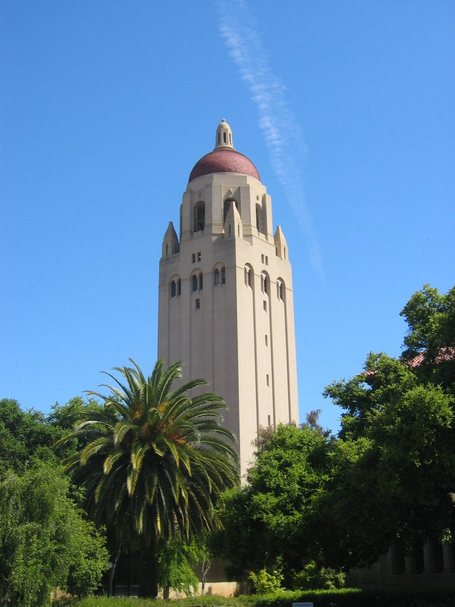 "A slew of cannonballs could EASILY take this out! via www.creationdunproduitinnovant.com"

Last time out, we started our look at the UC Cannoneers.  For those who have never attended a Cal game, everytime Cal scores, the Cannoneers shoots off a Cannon in celebration.  We here at the California Golden Blogs believe that the spirit organizations at Cal (such as the Mic Men, such as the Dance Team, such as the Rally Comm, such as the Band and many, many others) make the Cal gameday experience so special.  But so little is known about the inner workings of all these various organizations.  Today, reader Yes We Cannon, a former UC Cannoneer, continues answering our questions about the Cannon up on the hill.  Here is Part 1!  Read more information behind the fold.  GO BEARS!

Has anyone ever tried to shoot an actual cannon ball out of it? If someone theoretically did, what building would be most likely to get hit by the trajectory of the launch?
If you're rollonubears or younger and you ask me this, the answer you'll usually get is that we do fire an actual cannon ball, but we fire it towards Stanfurd, but it never quite makes it, so if you take a boat out to a certain spot in the Bay, you'll be able to find the collection of cannon balls we've been firing over the years.
The most ridiculous story I have about that is that towards the end of one of the games, a man came up with four young boys who were climbing trees and watching the game from behind the caution tape perimeter we set up. One of them asked the question, I gave the answer I just gave, and the boy asked if we'd studied the environmental impact of the cannon balls on the fish in the Bay because he was learning about pollution in the Bay in his class. Kids these days.

But, no cannon balls. The Cannon fires Class C fireworks charges (1.4G) (lots of smoke, lots of noise, but nothing _incredibly_ dangerous). The Cannoneers used to make their own flash powder charges, too, but since we're officially tied to the University and enjoy having all of our limbs, that isn't the case anymore.

Complete this sentence: I want to punch _______ in the face.
The Stanfurd cannoneers who ruined it for the rest of us. Also, the belligerent dicks on Tightwad Hill (note: *not* the fans. The belligerent dicks). Also, people who make hats out of card stunt cards.

If given the chance to shoot actual cannon ball, what building would you aim it at?
Hoover Tower. A good marker for aiming tends to be the dome at I-House, and from what I was told, from older Cannoneers, the optimal height of the back of the barrel years ago was the one that would let you keep a can of beer under it. For obvious reasons, that isn't a tradition we're allowed to keep up (fire marshals are convinced alcohol, explosives, and dry grass aren't a winning combination. I agree).

Does each game seem like the same routine over and over again or are there any special experiences that you had at the cannon station?

Platform.  It's called the cannon platform.

Each game has the same routine, but there's always something that sets each game apart. I've had my share of rain games, drunken assholes who think that they're allowed to do whatever they want because they have a B.A. in English (true story), seeing people drag a keg up Tightwad Hill and then start selling beer to the fans, watching those aforementioned assholes slide down the hill after they lose their footing (lesson: don't be a dick, pay attention to where you're going, and don't wear sandals/flippy-floppies when you're going to be walking on uneven terrain).

My favorite, though : Getting to be a part of the Video Game halftime show. Most of the people who watched the video that circulated online don't know that at the end of the Mario end-level music, when the flag drops to the bottom, the Cannon fires (a substitute for the fireworks in the game), but being include for the band's show and being able to be a part of that was absolutely amazing.

"You have to listen for it, but the Cannon fires around 6:09"

Something I'll remember, even if I don't remember the game: USC 2007. I can't tell you anything about the game except that it was cold, it was wet, they wore throwback jerseys, and I never got a Joe Roth hat. You think it was bad in the stands? Try standing in the dark, on a dirt hill, trying to make sure people stay out of your caution-tape perimeter so that you can still fire the Cannon if/when you have to. Plus, my girlfriend at the time was visiting and up at the platform for that game. Not the greatest situation.

Around the 7-minute mark, there’s the Cal Band playing the 1812 Overture, with the California Victory Cannon firing as another instrument. If I’ve heard correctly, in addition to having to compensate for the sight/sound discrepancy due to the distance, because the Cannon had to fire twelve times, the Cannoneers weren’t able to see the Band director on the field through the smoke, so they had a separate director specifically assigned to the Cannon. Pretty sweet stuff

The Cannoneers are also in charge of the fire part of the Big Game Bonfire, but I'll be nice and focus on the Cannon.

Do you wear ear plugs?

No ear plugs, but the Cannoneers usually have some available for the members of the crew who'd like to have them.

Tell us what your typical day is like before a game.  Where is the cannon stored?  How is it brought down to the platform overlooking the stadium?
Cannoneers start their day fairly early, no matter the kickoff time, by going to pick up the truck that we transport the Cannon in. Long before kickoff, while other people are off drinking and tailgating, we pick up our Early Crew of 2-3 people and make our way to the off-campus location where the Cannon is stored. Once there, we toss the goat we brought to satisfy the guard-dragon, cross the Lake of Fire, and answer the Sphinx's riddle. We then get to the Cannon, unlock it from its holding cell, and load it up in the truck, securing it with ropes to make sure that it doesn't go rolling out of the truck while driving and cover it up with that invisibility cloak developed by UC scientists so people can't tell what it is while we're driving around Berkeley (people totally know what it is, usually, and often greet us happily when they see us driving around. However, no one has ever offered me food from their tailgate. That was my one goal, but it’s always been out of my hands. If you’re an alum and you see students, take pity and feed them, even if it’s just a bit! It goes a long way). Though, we usually can’t find that invisibility cloak (perennially misplaced), so we resort to using a tarp.

Originally, In order to lower it down the Hill to the platform, they used a block-and-tackle system with a short rope, which is absolutely ridiculous (that means that when they reset the system, people would have to hold the Cannon in place to keep it from rolling down the Hill). These days, we use a safety harness, the truck, a steel cable, and a crew of 8-12 people to get it safely down. It's a testament to the ability of Cal students that there have not been more than three serious to semi-serious incidents in forty-five years of working with the Cannon.

How old is the cannon?  What is its history? 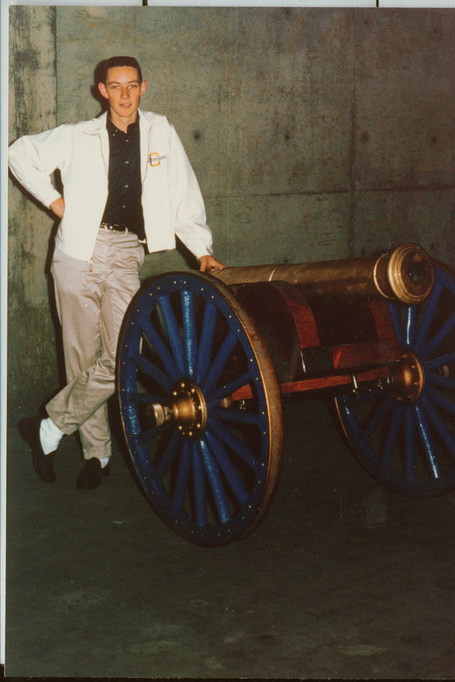 The words of Jim Soules, '64:
"In the Spring of 1963 I proposed to the Class of 1964 that Cal needed a cannon to help school spirit.  The class provided $600 to me to get it built.  I had the carriage custom made in Napa by a carriage maker who restored old western wagons. The wheels are from an old San Francisco fire wagon.  The barrel was cast in an Oakland foundry  - a foundry owned by a Cal alum who I believe did not charge for the casting.   Friends and myself lovingly painted it.  A machinist at the Physics Department bored the muzzle bolt to attach the explosive charge.

It was ready to be unveiled at a Noon rally in front of Sproul Hall on Friday, November 22, 1963 when word of JFK’s assassination reached us about 11:20 am.  The cannon was covered and we quietly returned it to the basement of the Student Union.  After the Big Game was postponed it was then unveiled at next weeks rally and then first used on the field at Stanford." 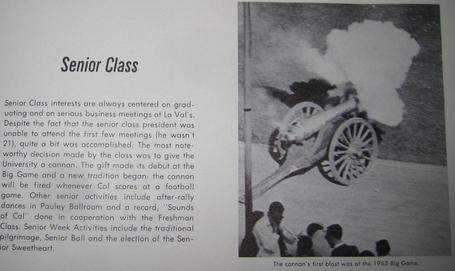 The Cannon's been fired on Tightwad Hill at that same spot since 1972, before that, it was fired on the field. In 1970, at the Stanfurd-Washington game, the Stanfurd cannoneers (their cannon was fired using a ram-rod and gunpowder and came about after ours had been around for at least a few years) were a bit overzealous with the ram-rod, and were injured when their cannon backfired (and from what I've heard, fired the ram-rod across the field). The then Pac-8 then banned cannons and other explosive devices in Pac-8 stadiums, something that carried over with the Pac-10. The Cannon was actually banned from Sun Devil stadium in 1976 (Arizona State didn’t join the Pac-10 until 1978). It was brought up to Tightwad Hill in '72 by Bowlesmen (Cannoneers were all Bowlesmen for a long time), and fired from a platform made from one of the students' dorm room furniture, with the assumption that the Pac-8 would approve it eventually. The current platform was built in 2004, and is much more sturdy than any of the preceding platforms.

So far, it's been stolen twice, once by a Cal fraternity (it was recovered on their lawn the next day), and once by Stanfurd students in 1964 (if you're interested look up "The Treaty of Castle Lanes"). The Cannon's only run out of charges once, against UoP in 1991, when Cal scored 12 touchdowns.

These days, the Cannon fires during the football team’s runout at the beginning of the game, after touchdowns, field goals, and safeties, at the beginning of halftime, and at the close of the game, if Cal wins. I’ve heard stories that in the 1982 Big Game, the Cannoneers fired as soon as the touchdown happened, rather than waiting for confirmation from the refs, in order to nudge the referees into making the correct call.

Is there more than one cannon?
There is one cannon.

How often do you use the pick up line "Hey baby, I got a huge cannon!  And I can't wait to use it."  Moreover, how successful is that?
About as well as "You need a 1.4G placard, because you light up my life!" or "Are you in heat, or is that just the Bonfire?", neither of which is successful in the slightest.

The Cannon platform is a *great* place for dates, though (as long as it's not too cold and there aren't any homeless people lodging up there (good luck with that)), particularly around sunset or sunny afternoons.