In this eighth part of a twelve post analysis, we're going to look how scouting can lead to a linebacker's recognition of the play.  In case you missed the previous installments, here is Part I, Part II, Part III, Part IV, Part V, Part VI, and Part VII.

Prior to Cal's bowl game against Miami, I thought I'd do a quick scouting report on Miami.  Essentially, what I would be doing is a much much much smaller version of what the Cal Football team would be doing for Miami.  Without any film of Miami, I turned to Youtube and found some highlight videos.  I watched those videos and put together a small scouting report (Know They Enemy: Scouting the Miami Hurricanes).

One of the tendencies which I found was one of Miami's favorite passing routes.  In the YouTube video below of Miami vs. North Carolina, at approximately 2:40 into the video, Miami completes a pass to its slot WR on a mid-range (approximately a 15-18 yard) dig.  The "dig" is a route which the wide receiver runs straight up the field to a certain depth, then cuts towards the center of the field parallel to the line of scrimmage.  You can view the completed dig route at 2:40 in the video below:

I saw the very same route and completion on the highlight reel of Miami vs. Florida State.  You can view the dig route completion at 5:10 in the video below:

After seeing these two routes and completions out of similar formations and similar personnel packages I wrote:

5:10 - We saw these types of throws in the North Carolina footage.  Beware of the 15-18 yard digs from the slot WRs.  Linebacker interception opportunities if they read the route and the eyes of the QB.

Let's see how this plays out in the Emerald Bowl.  Below is the pre-snap picture: 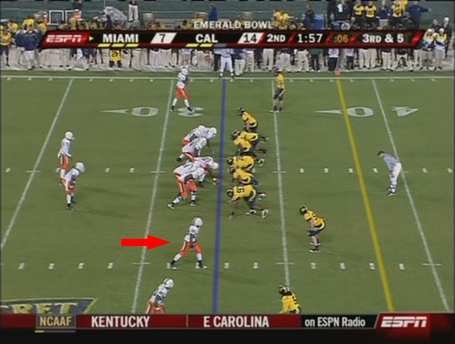 Miami is in shotgun.  They have 11 personnel on the field (3 WRs, 1 TE, 1 RB) - not to be confused with 11 players on the field.  The TE is to the left of the offensive line.  I've put a red arrow by the Miami slot WR.  This is the man that the defense should be watching on plays where the offense is in shotgun with 3 WRs. 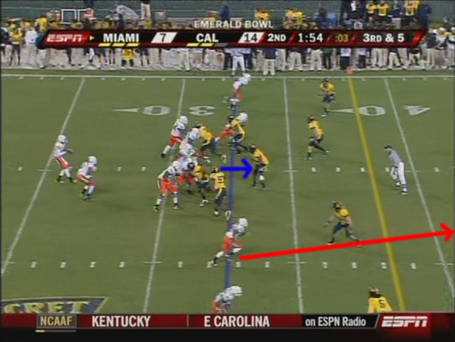 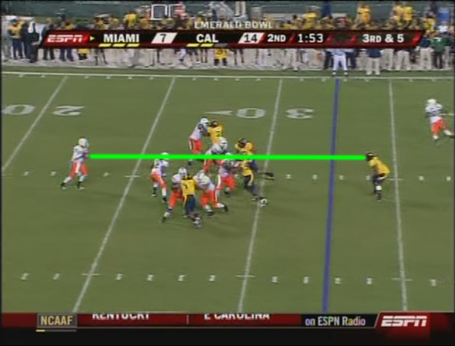 As you can see in the picture above the Cal nose tackle is spying the QB. 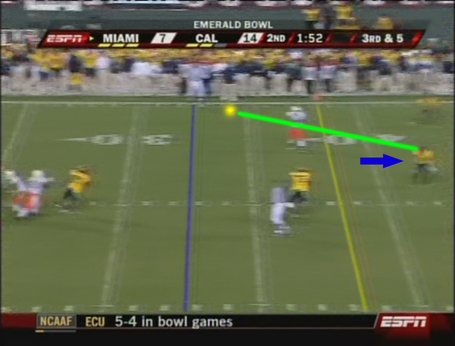 The Miami QB passes the ball (highlighted yellow).  I've put a blue arrow on Cal linebacker Mike Mohamed.  He read the defensive formation, and the QB's eyes, and is eyeing the ball for his pending interception (green line).

What did I say in my scouting report?:

Beware of the 15-18 yard digs from the slot WRs.  Linebacker interception opportunities if they read the route and the eyes of the QB. 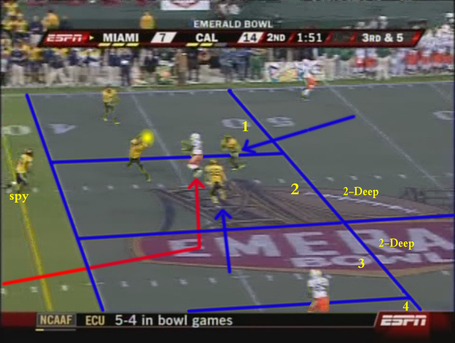 Mohammed makes the interception!  I've highlighted the ball yellow.  I've also drawn in the defensive coverage and the WR route (Note: the boundaries of the zones are not absolute, I've merely drawn them over the yard lines to keep things easy for myself).  The WR route is in red.  The Cal defense was playing with two deep safeties each of whom covers the deep halves of the field.  Underneath the two deep zones, Cal had four underneath zones.  Cal linebacker Zack Follett, and Cal safety, Johnson, moved in for the hit after the pass (shown by the blue arrows). 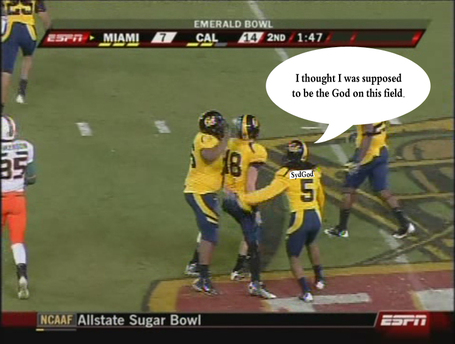 And the Cal players rejoice!

Here's the video of the play.  (Special thanks to Ken Crawford from Excuse Me For My Voice, for volunteering to create youtube videos for the plays I am dissecting.)

In only watching two short Youtube videos, I was able to pick up on a few of Miami's tendencies.  Now, just imagine how much more prepared the Cal defense was.

This offensive play, or plays that are similar, were effective in previous games for Miami so it's not surprising that they were going to try and run the play in the Emerald Bowl.  However at the same time, it is surprising that they ran this play against Cal since it in involves a pretty dangerous pass over the middle of the field which is probably going to be against zones (such as in this play) because Cal likes to play zones.  A pass over the middle like in this play is going to have to involve perfect timing so the QB can pass the ball between the windows (the area between defenders in zone).  Furthermore, the QB cannot "lock onto" his target - meaning he immediately and only looks at the receiver he intends to throw to - because if the QB locks onto his target the defenders can read his eyes and jump the pass for an interception.  It's a safe bet that Mohamed not only knew prior to the snap that there was a possibility the slot WR on the other side of the field of him was going to run the dig towards him, but also that he was reading the Miami's QB's eyes.  Actually, scratch the latter half of the previous sentence.  Mohamed was watching the QB's eyes.  This is obvious in the youtube video above.  Note how Mohamed flows to his right as he follows the QB's eyes, then flows back to his left as the QB looks to the slot WR.

In summary, football teams watch film of each other to predict what the other team is going to do in certain situations or formations.  Watch a little film yourself, pay attention to what you watch, and you'll see the same  tendencies too.