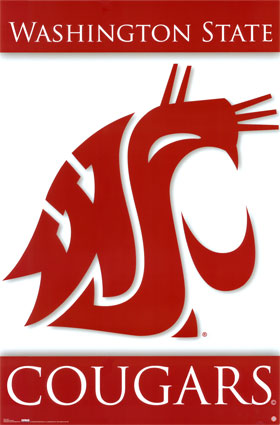 Ragnarok: Last time we heard from these guys, they were holding open tryouts on campus for quarterbacks. Open tryouts!!

Avinash: Is Pullman turning this into a reality TV show?

TwistNHook: We shouldn't mock WSU too much, because we were once like them.

I feel like there were years when even the Big Game wasn't televised live. Washington State has really fallen off, it is sad. What can they do to regain their former glory? Remember, they are the last non-USC team to go to the Rose Bowl. They've been to a Rose Bowl this decade, which is more than us Cal fans can say (by a magnitude of about 5).

HydroTech: Did you know that their QB last year (one of many who played), Kevin Lopina, had 0 TDs and 11 INTs on the season?!?!? Yikes.

Their top WR Brandon Gibson is gone now. I wonder who will step up and take his place?

Have you looked at WSU's away schedule? At USC, at Oregon, at Cal, at Notre Dame, at Arizona, and at Washington!!! BRUTAL. The easiest away game for them is at Washington, and given that WSU's level of talent isn't exactly far superior (if at all) to Washington, that's going to be a really tough game too.

TwistNHook: Firstly, I'm sure we are all excited about CougCenter Week coming up this week. I love those guys. I just went over to check up on them and they have a great article on their linebackers up. 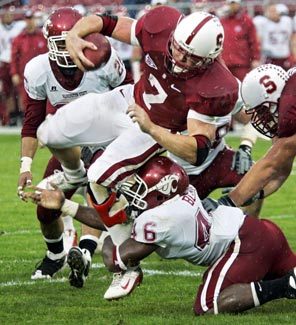 Ah, but last year also was a testament to what these guys can do when the line in front of them is doing its job. One need look no further than the Apple Cup. With the defensive line turning in a yeoman's effort behind resurgent Toby Turpin, linebackers Greg Trent, Andy Mattingly (moved back to linebacker for the game) and Louis Bland combined for 23 tackles, including 4.5 for a loss. Bland, a converted safety, was particularly effective roaming free, repeatedly slicing into the backfield to disrupt plays. Additionally, these guys finally started to trust each other as the year wore on, and it showed in the results.

And there's the rub for this year. If there's one unit that could give the running backs a run for their money in terms of talent and depth, it's these guys. When a guy was a third team freshman all-American and the Apple Cup hero and isn't currently slated to start despite looking pretty healthy coming off a knee injury (Louis Bland) that says a lot about what the unit has going for it. Mattingly is back where he belongs at outside linebacker, Jason Stripling looks to finally be ready to fulfill the projections many had for him when he came north from Texas, and a trio of talented young guys in the middle are champing at the bit to fill the void left by Greg Trent.

LB appears to be a position of strength for them. Honestly, its not fun to just crush teams. I mean I guess its fun in one sense. The first 3 minutes of the WSU game were fun. But then after essentially the first play, the fun dissipated quickly. I mean I don't wanna lose or anything, but at least go up against teams that can put up a fight. So, I'm hoping for WSU to improve this year. And maybe the key is through their LB play. They have some young talent here and could be leaders for the team.

Yellow Fever: When are you ever not weird?

TwistNHook: When I buy my Nets season tickets and attend all those WWE wrestling matches. That's when I'm MOST normal!

Yellow Fever: This coming from a guy who wrote a paper on Japanese puroresu.

TwistNHook: Hey, that got an A! 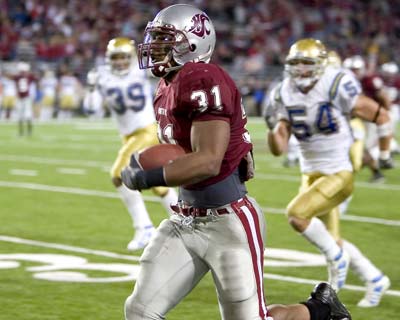 I think. Actually, I don't remember, it was so long ago. I hope it got an A!

HydroTech: How many yards do we all think Best is going to get against WSU? Last year he had 200 yards on 14 carries. If I recall correctly, Best was taken out of the game in the fourth quarter or so. Perhaps next time he needs to stay in the game and roll up 300 yards on them.

Yellow Fever: I say he stops around the 250 mark.

TwistNHook: According to the box score, he was taken out early early early in the 3rd quarter. Here are his last 2 plays:

Speaking of which, for those of you who complained that Jahvid Best is a mediocre back who just racked up tons of garbage yards against terrible teams, like the Washingtons, he played about a total of 4 quarters against them. He rushed for like 450 yards in those 4 quarters. If he had played all 8 quarters, he maybe coulda gotten 1,000 yards! Kind of a toads redick argument, in my ever so humble opinion.

Avinash: I wonder who will be the tougher opponent, EWU or Wazzu?

TwistNHook: We could ask Paul Wulff about that one, I bet.

Ragnarok: Frankly, the only thing about this game I'm even remotely interested in is seeing James Montgomery facing his old team. He was a good backup for Forsett back in '07, though he never struck me as a star. While I remember reading articles at the time of his transfer stating that playing time wasn't the reason he left Berkeley, I gotta wonder where he'd fit into the Bears' current rotation of backs. He'd be behind Best; that's pretty obvious. Would be still be ahead of Shane Vereen?

Avinash: Funny thing is he isn't starting for Wazzu this season. It's still Dwight Tardy's role.

This is one unit where Coug fans can proclaim to all that are listening, "We have Pac 10 depth there!" Dwight Tardy has proven he can gain yards and make plays if given the opportunity to advance to the line of scrimmage before getting gang-tackled. James Montgomery's biggest problem at Cal was that he wasn't as good as Jahvid Best, Marshawn Lynch, etc. Logwone Mitz has size and possesses the ability to break off a big gain (see: Apple Cup!).

Paul Wulff likes to run the football. He can do so with this group. There will not be anyone taking the ball 40 times a game a la Jerome Harrison, but a running back by committee approach seems like a very exciting option. The Cougs will have the luxury of a talented back with fresh legs in there on every play. Maybe, just maybe, Dwight or James or one of the other guys will get really hot one game and we will ride him to an upset over (insert Pac 10 team here.)

TwistNHook: Here's hoping that upset isn't over us!

Yellow Fever: I'm going to guess that since Dwight Tardy (who?) is starting over him, he'd probably be behind Vereen as well.

Avinash: Danzig did some of his own reporting on Monty for WSU Football Blog:

We saw Monty as more of a power back than a speedster. He got most of his reps during short-yardage situations for good reason. Monty cannot be taken down with arm tackles and he had a knack for always getting an extra three yards while being tackled. He would do this by twisting and torquing his body toward the first down marker. He almost never went down during first contact. He does have the speed to get to the edge and turn the corner but he never looked like he was moving that fast. We hardly ever passed to him, but when we did, he caught everything... no drops. While on campus, he was an ideal student and never got in trouble.

TwistNHook: We do not have a lot of information on Montgomery, because he did not play a lot. I think danzig's analysis is right on. More of a power back than a speedster. Ostensibly, he would have been the thunder to Best's lightening. Oh well.

Yellow Fever: For what it's worth, I think he also made some references to not really enjoying the environment around campus either. Berkeley isn't as crazy as its previous reputation so it's unclear as to what he was talking about, so who knows.

TwistNHook: So, who is gonna win this one? I say Cal Googleplex-0.

HydroTech: I think WSU can get a "moral victory" if they can only lose to us by 30. Did I just jinx us? Vegas Bowl here we come.....

Yellow Fever: Not that there's anything wrong with another excuse to go to Vegas.