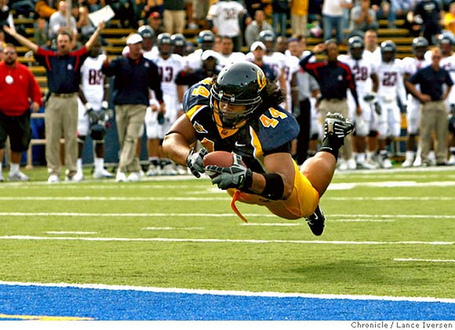 At first glance, this position looks like a surefire upgrade. All the starters are returning. We are facing a slew of teams this season replacing their offensive line depth or quarterbacks. All of these factors should amount to ripe pickings for the Bears.

Yet if you look closer, there are certain things that could make Cal fans a little uneasy. For one, the linebacking corps (more on them later) is likely to be taking a step down. Opposing O-lines are more likely to hone in on the front three without fearing the four or five capable of attack behind them. There are also issues of depth and fatigue, and who will be taking Rulon Davis's role, all of which should be worrisome and worth tracking.

That being said...assuming health stays constant, this unit should be going up, not down.

Will Cal's D-line be better, worse, or about the same as last year? Where does Tyson Alualu rank among Cal's greatest linemen? Discuss in the comments and vote in the poll!

Will fatigue be a factor? Behind the polished three starters will be a lot of fresh faces. The Bear Will Not Quit explains it best.

But more than any other position, defensive line needs depth behind it. And not just situational depth, like for third down or goal line. You need constant rotation to keep guys fresh. This is a big reason teams like SC are so strong in finishing games in the fourth quarter as compared with other teams. Their defensive line reserves are good enough to play significant minutes without much dropoff, keeping the whole d-line fresh all game. (And most of their opponents' d-lines are not as deep, so SC's offensive running game also tends to get rolling late in the game.)

With the pounding defensive linemen take, you also need interchangeable reserves who can play significant minutes if a starter can only play limited minutes because he's dinged up. And of course, if someone goes down for the season, you better have someone who is ready to come in full time. Think of the ripple effect of Mbakogu's injury, or even Davis' inability to stay healthy the last two years.

If Alualu or Jordan goes down, right now the first guy off the bench is probably sophomore Guyton. Other guys available include Browner, Owusu and Tipoti. All nice players, but none are proven, and none have had significant reps. And they're all second year players except Browner (who's not even listed on the post-spring depth chart).

The Bears only go three deep in terms of experience and will have to slowly integrate the others in. So not only does that mean the defensive line might have trouble adapting

Because the standard of our conference happens to be USC, our abilities to adapt to injury are severely limited. A healthy D-line is simply one ingredient needed to holding our own with the rest of the offensive lines in the conferences, inexperienced or experienced. 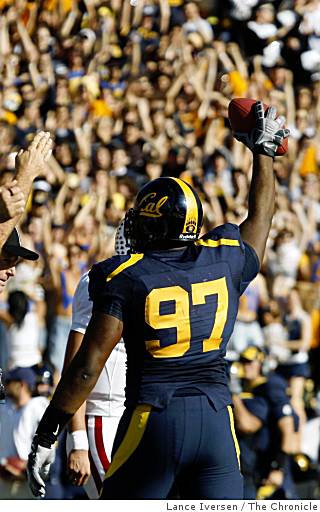 Should Cameron Jordan be looking over his shoulder? What could resolve many of these depth issues is the rise of Trevor Guyton this season, who directly challenged Cameron Jordan for his starting spot in camp. Jordan reasserted himself after a weak opening scrimmage though.

Tedford said he has been pleased with Cameron Jordan's reaction to being moved down to the second-team defense. Jordan wasn't playing with enough intensity before, Tedford said, but over the past few days "he got a fire lit under him."

Better to have it happen now than in the middle of the season.

"It's never a good thing, but it's a good thing that he realizes right now what it takes to stay on top of your game -- you never get in a comfort zone or a low performance level," Tedford said. "He got a little wake-up call and the thing about it is he didn't pout about it. He changed his attitude and he's playing much harder."

Trevor Guyton replaced Jordan at first-team defensive end after the team's first scrimmage. Jordan, though, appeared to be working with the ones toward the end of Saturday's evening session.

In either case, the emergence of Guyton, a talented sophomore who should be ready to step into Alualu's shoes by next season, is something to be hopeful about. Right?

Stats, stats, stats....let's take a look at Cal's best D-linemen the past four seasons, and compare how good they were at bringing the ballcarriers down.

You can see that with only three D-linemen on the field in every play, the 2008 team outperformed their 2006 and 2007 counterparts in all three big measures of defensive production . You could look at this as a combination of factors.

1) Fewer rotations or snaps=less fatigue at the line
2) 3-4 alignment puts more onus on linemen to pick up linebacker blitzes and rushes, allowing for defenders to penetrate and get into the backfield.
3) Better talent and better health.

It's probably a combination of all three. But you can see how valuable the defensive line was in the improved 2008 performance, as they picked up a greater amount of slack from the back eight.