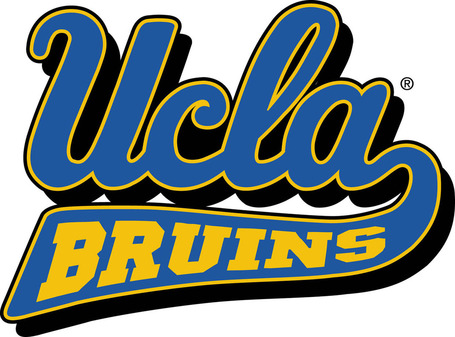 TwistNHook: Can we finally win a game in LA? Finally? Please. Pretty please. With ice cream on top!
But I feel good about this year. I feel like this is our year to take care of business in LA. Let's do this thing!

Avinash: The one thing that should worry us is UCLA is going to be very unpredictable this season. Their quarterback situation will be better with Prince or Craft lacing it up, but given it's Price's first year back there he'll throw clunkers. Their defense was very formidable last season, and only crumbled when UCLA's offense gave up interceptions galore. However, their offensive line is very young, which could be well exploited by our 3-4 D.

Nevertheless, cross your fingers we cross the Bruins on a down week.

HydroTech: The UCLA game scares me. I think UCLA is sort of like a sleeping giant. While UCLA does have a goofball at the helm in CRN, they have Norm Chow to lead their offense. And with them landing pretty good recruiting classes year after year, it's not like they're lacking in talent. So I think once they get themselves organized and put together, they're going to be a tough team. I'm not really sure if this is the year that they'll actually become a team that will finish in the top half of the conference, but I think that they're not too far away from finishing in the top half of the conference.

As for the game being in L.A., well, that little fact right there makes me worried sick that we might lose. I don't believe Tedford is cursed or anything and that he can't win a game in L.A. But I think that hostile crowds, against solid opponents is always a recipe for a loss. I could see Cal destroying UCLA, and Cal also losing to UCLA.

Ragnarok: Honestly, I've never associated the words "Rose Bowl" and "hostile crowds" before. UCLA's always had talent, even during the darkest hours of the Karl Dorrell regime, but I'm still a little shocked that the Bears haven't managed to pull one out down there since 1999 (didn't we end up forfeiting that victory or something?)

TwistNHook: We'll get a chance to see the stuff UCLA is made of early in the year. UCLA travels to Tennessee. Cal fans know the brutality of that place. If they can hold their own there, could make for a boost to UCLA's morale and springboard to further success. If not, who knows?

Then again, Cal got crushed in 2006 there and had a great rest of the season. So, who knows?

Their D is led by Alterraun Verner, who led the nation in passes defensed, last year.

Also, he's smart as he was named All-Academic Pac10. So, keep your eyes on him. He'll probably lock down our best receiver, (name yet to be determined). I'm not sure why this is all italics and I cannot fix it. Triple le sigh!

Avinash: Verner singlehandedly killed us in 2007. Those two picks haunt the hell out of me.

HydroTech: You're blaming Turner? Most fans would blame Longshore. He's responsible for INTs, the swine flu, and tectonic plate movement!

TwistNHook: Here is another person who could kill Cal on the D. Brian Price: 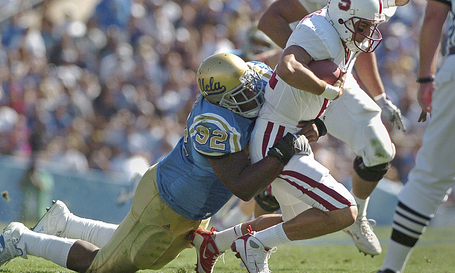 Last season Price started in all 12 games for the Bruins, leading the team with 14.0 tackles for loss en route to a first-team All-Pac-10 selection by the conference’s coaches.

Helping Price last year was the presence of defensive tackle Brigham Harwell, whom Price referred to as the big brother for the entire team. He said Harwell provided the Bruins with leadership, wisdom, passion and a force up the middle.

Now that Harwell has departed, senior Jerzy Siewierski takes over his position at defensive tackle. And now the leadership role falls to Price.

"I think he’s become a leader and he’s leading by example," defensive line coach Todd Howard said. "He’s become more vocal. ... His freshman year, we had Bruce Davis and Kevin Brown. Obviously those were the leaders. And then last year Brigham was the leader. This year we’re looking at him and Jerzy and (Korey Bosworth) – those guys are pretty much the leaders of the defense."

According to Price, everyone is trying to learn how to be that vocal presence needed on the defensive line and the team as a whole.

"Everyone knows when you have a feeling when you have to step up into a role," Price said. "I felt it was my time to be that vocal leader on the D-line."

Siewierski said he believes Price is one of the best players he has ever played with, and what makes Price so effective is his explosive first step.

I remember Brian Price murdering us last year (box score). He led the team with 14.5 tackles for loss last season. He had 5 tackles against us, including 3 for loss and a sack. We need to keep an eye on him.

HydroTech: Yes, I remember Price having a pretty good game against us last year. He's a pretty quick and powerful guy. He'll probably command extra attention from our OL. Cal might counter a fierce Price pass rush with screens, quick passes, and with moving pockets.

I know it's a long ways away, but I, for one, look forward to the LA Times in depth 2018 expose on that successful 2011 UCLA team. Such a lack of institutional control, UCLA had over that 2011 team. But I guess the Rose Bowl trip made up for it, right? Too bad UCLA has yet to recover from the pesky success of the Neuheisal era.

Avinash: Keep in mind this is also a very different UCLA team. No Karl Dorrell. No Dewayne Walker. No matter how much certain parties griped about the first, these guys always managed to come up with a strong gameplan that kept the games tight, even at Cal (every game from 2004 to 2007 was in reasonable doubt deep into the 2nd half).

Not sure what to make of Neuheisel yet. It's way too early to judge his merits or the new guys he's installed. Any thoughts on their coaching?

TwistNHook: Honestly, I think Neuheezy did a pretty decent job last year. The cupboard was bare. Really bare. And they had a decent defense and managed to knock off Tennessee. I'm sure there are many UCLA fans who were not enamored with last year, but the future does look bright.

Plus, Neuhizzle is bringing the sex-ay back, one sweater vest at a time. You think he and Tressel could have a sweater vest off. LOWEST CUT WINS!

UCLA is having some injury problems. Not huge things, but worrying nonetheless:

Even though Ramirez, a redshirt junior, didn't practice much in the spring because of hamstring issues, he had the inside track on the starting tailback job.

Ramirez has been slowed the past week with the injury and had limited carries, meaning more chances for sophomore Derrick Coleman and redshirt freshmen Jonathan Franklin and Milton Knox. All have had solid camps, and all could play a part in UCLA's running game this season.

Neuheisel shut down redshirt freshman quarterback Kevin Prince's workload in Friday's morning practice, and Prince didn't do much in the afternoon practice because of a sore right arm. Prince is expected to play in today's scrimmage.

"I'm not worried at all," Prince said.

Said Neuheisel: "That's to be expected on Day 13 of camp, and you're throwing as much as he's been throwing, you're arm gets a little dead. We've got to monitor that and keep him on a pitch count."

In the long run, these injuries probably will not mean much. But if UCLA's thin offensive talent level is already thinned further by injury, it could take every sweater vest in Neuhussy's wardrobe to win this year.

But I guess as long as Kevin Prince throws fewer than 4 interceptions a game, they'll be OK.

HydroTech: I think this might be the year that Cal *finally* gets a win in L.A. So I'm saying we'll win by 14 or so.

Avinash: If we beat USC, I believe we win handily against UCLA. If we lose, we're going to struggle. Even with the bye week, it's easy to lose confidence if we fall short of expectations.

TwistNHook: I agree that we could hit this UCLA game in the middle of a bad, bad place. If we lose to Minn, Oregon, and USC, we could head down to UCLA with thoughts of the 2007 Cal-lapse dancing in our heads.

Hopefully, a stout defense and an explosive running game coupled with a passable passing offense (see what I did there?) and sneaky good special teams can lead to our first LA victory, independent of previous games' results. I say Cal 28-10.

Ragnarok: Wow. Now that's a downer scenario if I've ever heard one. Thanks. Thanks a lot.

Bears gotta win this one. They just gotta. I can't go down to LA only to see the Bears lose for a 9th straight time. 8 is enough! 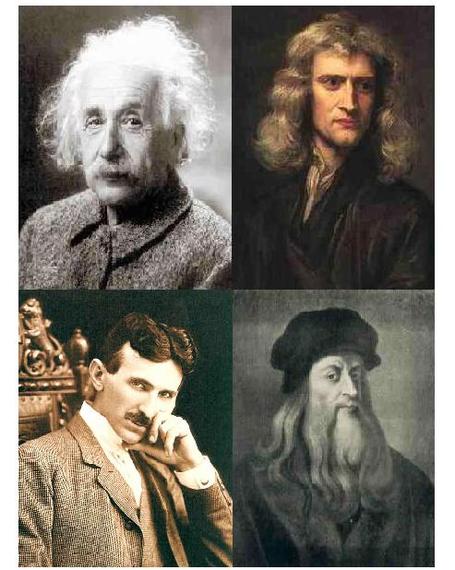 HydroTech: Ragnarok, perhaps you are the problem. You're the curse. You're why we cannot win in L.A.! You must not go!

TwistNHook: SOMEBODY STOP THAT MAN! AND HIS WIFE! AND THE 8 OTHER FRIENDS WHO ALWAYS GO WITH THEM! AND SPECIAL TEAMS/TIGHT END COACH PETE ALAMAR!

IT'S THE ONLY WAY!