OC Discussion: How Do Utah Fans Feel About Andy Ludwig?

Share All sharing options for: OC Discussion: How Do Utah Fans Feel About Andy Ludwig? 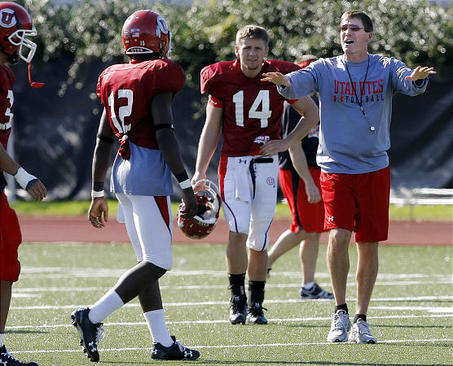 Cal fans don't have a lot of familiarity with their offensive coordinators. They come and go like bees, pollenating the flower that is the Golden Bear playbook with their own flavor of honey before moving onto other flora.

We looked at not one, but two of his previous stints in a two part series. It's Utah today, Oregon Thursday.

We talked with the Utes SBN Blog, Block U, and their leader, JazzyUte, about Ludwig's strengths and weaknesses. Our questions are in bold, their answers are beneath.

1) When Ludwig left Utah, a lot of Utes fans didn't seem too bummed at his departure. Any reason for this?

Block U: Poor Andy Ludwig had to follow the Urban Meyer show and that obviously was not going to be easy. Of course, he didn't help matters by essentially saying he was going to bring in his own offense, even though the spread option had been extremely successful over Meyer's short two-year stint at Utah.

This got the relationship off to rocky start and I don't think Ludwig ever recovered. It's not to say the Utes were bad, they weren't, but he was doomed from the start. So many Ute fans thought they would not miss a beat after 2004 and they did. But beyond that, the offense really took a hit - especially in the 2006 season.
Ultimately, it was that year that put both Kyle Whittingham and Ludwig on notice. Struggles early in the 2007 season with injury didn't help matters and it seemed the offense really stagnated at times throughout his tenure here. Even in 2008, there were games where they couldn't get anything going on the offensive side and if it weren't for Brian Johnson, they probably don't finish 13-0.
Ludwig was also known for some head-scratching calls on 3rd and short (double-reverses that never panned out) and really packing it in before the game was over - often allowing the opposing team a chance for a comeback.
But with all that said, I don't think most Ute fans thought he was a bad offensive coordinator. They just didn't think he was a very good one. In fact, I think it's safe to say Ludwig fell somewhere in-between not so good and very good. There were games where he looked masterful and other games where you just didn't know what to think. So when he left for Kansas State, many were indifferent because they thought (and still do) the program could do better.
We'll see if they were right this season.

2) Utah was blessed with the offensive-minded Urban Meyer leading them to their first BCS bowl. What were the differences in the ways Meyer and Ludwig approached the offense and utilized the pieces they had? Was Ludwig always competing with Meyer's shadow?

Block U: As I mentioned, Ludwig certainly was consumed by Meyer's shadow because he had taken Utah football to new heights. 22-2 in two years, including the first undefeated season in the program's modern history was hard to follow and there were growing pains.

Ludwig's offense was never a true spread option because he didn't run the spread option at Oregon and Fresno State. He added aspects of it, but it was very common to see Brian Johnson line up under center as opposed to out of the shotgun like Alex Smith in 2003 and 2004.
Now fans have debated the effectiveness of this for the past four years, but the offense was a bit different from what Meyer had established here. That was evident in 2006, when Johnson sat out the entire season due to injury. Because of Utah's lack of a spread option quarterback and any type of running game, they were forced into a rather basic passing offense that rarely utilized the option until they worked Eric Weddle into the offense later in the season. But even then, it looked more like Ludwig's offense at Fresno State and Oregon than it did anything Urban Meyer ran here.

3) That Sugar Bowl performance...was that typical Ludwig, or were you surprised by how quickly they jumped out on Bama?

Block U: Not really. The Utes were not known for running the no-huddle offense under Ludwig, unless they were forced into their two-minute offense. But I will say what you saw was probably more like what Ludwig had been familiar with prior to arriving at Utah because there was almost zero spread option in any of the first three touchdowns against Alabama. That was purely an up-tempo passing offense that exploited a weakness that had hurt the Tide all season long - their inability to really step up and defend against the no-huddle.

4) How would you best characterize Andy's style of offense? What type of plays was he fond of running?

Block U: Ludwig was never fond of running the spread option here at Utah. We knew that from the start. That's fine, because some coaches just have a difficult time adjusting. This was ultimately Whittingham's fault for bringing him in knowing the fans wanted to keep the spread option. It didn't happen and though there were parts of it that remained in the offense, we were generally given an offense that worked with a mix of shotgun and lining Johnson up under center.

No problem there. I'll even admit that Ludwig switched things up a bit this season, specifically with the Corbin Louks package (a true spread option quarterback) and the Asiata pass. What that means for Cal, I can't say. Ludwig will probably feel far more at home running their offense than he ever did at Utah because he doesn't have to incorporate the spread option.

5) How good was Ludwig at developing his quarterbacks?

Block U: Well it's hard to say. Ludwig has pretty much only coached two quarterbacks here at Utah - Brian Johnson and Brett Ratliff. Johnson has turned out to be a good quarterback, but how much of that development was because of Ludwig I do not know. I liked Ratliff, but he didn't have any type of supporting cast in the backfield and it hindered the Utes greatly.

There was Tommy Grady, who only came to Utah because of Ludwig, but that was a disaster. I don't even want to get into that.
In the end, Ludwig had his ups and downs here at Utah and I think that is why Ute fans weren't as disappointed in his leaving as they were when Gary Andersen - the defensive coordinator - took off for the Utah State job.
Does that mean he won't be successful at Cal? Who knows. It's a different mentality there and it's a better fit than at Utah. But so was Oregon and their fans were extremely happy to see him come to Utah.