Share All sharing options for: New Rules For College Football, 2009

The 2009 football season is nearly upon us, and forward continues the inexorable march of progress.  With this year's edition of the rulebook, the NCAA Rules Committee has once again proven two things:  1) the rulebook is still far from perfect, and 2) the rules committee cannot help themselves from continuing to mess with the rulebook.

2008 saw a number of new rules implemented, changing the game in subtle, but important, ways.  2009?  Not so much.  Outside of UCLA, USC, and those few teams with rugby-style punters, I doubt you'll notice any change to this year's edition of the rules.  On the flip side, to those familiar with the rulebook, the sheer number of minor changes made is bordering on ridiculous.  A few important loopholes were closed, true, but most of the changes are made merely for clarity's sake (I suppose), rearranging the wording without actually affecting the meaning.  This year's edition features the sort of sweeping revision that only the pedantic or the litigious could love.

However, even as we ignore the numerous minor changes, it's worth running down the few more impactful (not a word, but I don't care) revisions that were made.  For those of you who want to be the most informed fans hurling insults at the referees this year, let's get to it.

This rule change is aimed squarely the USC - UCLA rivalry.  For many years, UCLA shared a home field with USC (the Los Angeles Memorial Coliseum), and when the two teams met in their annual rivalry game, both teams wore their colored (home) jerseys.  After UCLA moved to the Rose Bowl in 1982 (replaced by the Los Angeles Raiders), the tradition died, and the rules prohibited the two rivals from starting up again.  However, Pete Carroll and Rick Neuheisal agreed last year to say "screw the rules" and restart the tradition, with the home team burning a timeout at the beginning of each half to match the lost timeout the road team was penalized with.  The rules committee was kind enough to say "this is a ridiculous situation", and changed the rules. 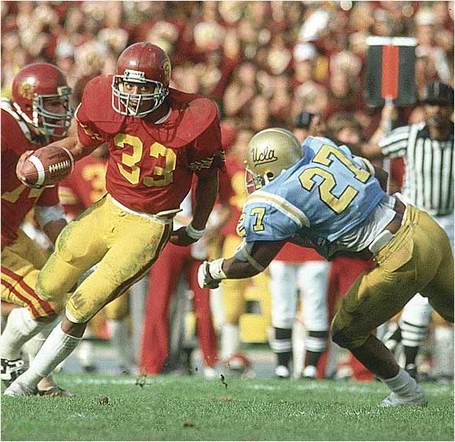 I think it's a tradition worth bringing back.  Snazzy, no?  -  Image via usc.freedomblogging.com

The Three-and-One Principle of penalty enforcement applies when the penalty statement for a foul does not specify the enforcement spot.  Application of this principle is described in Rule 10-2-2-c.

The basic spot is a benchmark for locating the enforcement spot for penalties governed by the Three-and-One Principle (Rule 2-33).  Basic spots for the various categories of plays are stated in Rule 10-2-2-d.

Well, there you have it.  Simple, right?  Actually, it's not that complicated, but it's even less interesting.  I'm pretty sure you could watch football every Saturday for the next 50 years and never be bothered to learn about this rule.  After a foul, the refs will put the ball in play in a fair place, and the next play will start from there.  Don't worry about it.

The tackle box is the rectangular area enclosed by the neutral zone, the two lines parallel to the sidelines five yards from the snapper, and Team A’s end line.

Uh, so what?  Read on, my friend.  This rule change has implications for rugby-style punters.

a. A period shall be extended for an untimed down (other than a try) if during a down in which time expires one or more of the following occurs:
1.  A penalty is accepted for a live-ball foul(s) not treated as a dead-ball foul. The period is not extended if the statement of the penalty includes loss of down.

Perhaps you'll remember a situation late in last year's game at Arizona (if you haven't seared the game from your brain), where Kevin Riley, running the two-minute drill, was flagged for an illegal forward pass (throwing the ball form beyond the line of scrimmage), turning what was, until that point, a two yard gain into a three-yard loss.  What you may not have realized was that this was done on purpose.

See, the penalty for an illegal forward pass is 5 yards from the spot of the foul and a loss of down.  However, the clock also stops on a penalty.  Riley may not have known whether he was across the line of scrimmage or not when he threw the pass, but he admitted to Ken Crawford after the game that he knew he was close.  Still, penalty or no penalty, the absolute worst thing you can do in the two-minute drill is to get tackled in-bounds, especially for a small gain.  With two minutes left in the game, you'd gladly trade 5 yards to save 30 seconds, and that's exactly what Riley did.  Really, this play was a reaction to how the Oregon State in 2007 ended.  Had Riley thrown the ball away, even after he ran past the line of scrimmage, the clock would have stopped, a minor penalty would have been enforced, and the Bears would have been given another shot at kicking a game-winning -tying field goal. 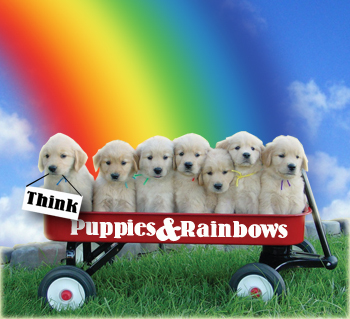 This is the point in the post where I would insert a video of the end of the OSU game, for illustrative purposes.  Just the thought of doing that, however, makes me want to gouge my eyes out.  So, instead, here's a picture of puppies and rainbows.  Enjoy!  -  Image via www.vampirerave.com

It's a clever exploitation of the rules, and this rule change doesn't affect it.  Instead, it closes a different loophole that could be exploited in a similar situation.  One other rule that applies in late-game situation is the rule that no period can end with a penalty.  If, for instance, the defense thwarts a touchdown by committing pass interference as time expires at the end of the first half, the penalty is enforced, and then the offense gets one more untimed down in the half.  In theory, they could get several more untimed downs, continuing until a penalty-free down was completed.

"So," thinks the clever coach, "what if, with the clock at 0:00 and our final play broken, we intentionally commit a penalty to get us another down?"  Sure, you'd take the loss of yardage just to get another shot to tie or win the game, right?  What if your illegal forward pass results in a touchdown?  What does the defense do?  They can't decline the penalty, because they lose the game, but accepting it means giving the offense another down.  Well, not anymore.  Now, a team would only get another, untimed down if they penalty didn't result in a loss of down, a ruling that honestly makes a lot of sense to me.

25-Second Clock. If the officials signal the game clock to be stopped for any of the following reasons, the referee shall signal (one open palm in an over-the-head pumping motion) that the clock should be set at 25 seconds:
4. Injury timeout for a Team A player only. The play clock is set to 40 seconds for an injury to a player of Team B.

After a timeout for an injured Team B player, the play clock shall be set at 40 seconds.

This rule change is intended to close a loophole in last year's new timing rules, whereby a visiting team could potentially "game" the clock.  Imagine a late-game situation where a defense is trying desperately to get the ball back, while the offense milks the clock for everything it's worth.  The whistle blows, and the play clock is set to 40 seconds.  A defensive player could potentially fake an injury, forcing not only a timeout, but, under the old rules, resetting the play clock to 25 seconds, preserving a precious 15 seconds for the defense.  It's not much, but it could mean the difference between the trailing team's offense getting the ball back or not.

As far as I'm aware, this loophole was never exploited, and now it's closed.  Hurrah.

The kicker’s protection under this rule ends:
(a) When he has had a reasonable time to regain his balance; or
(b) When he carries the ball outside the tackle box (Rule 2-34) before kicking.

Condition (a) was previously in force, but condition (b) is new for this year.  Basically, it eliminates a situation wherein a punter could roll out to the side of the field under the protection of the "roughing the kicker" rule, decide not to punt, and instead tuck and run for a gain.  Now, punters are still able to tuck the ball and run with it, but once they leave the tackle box, they're treated just like any other ball carrier. 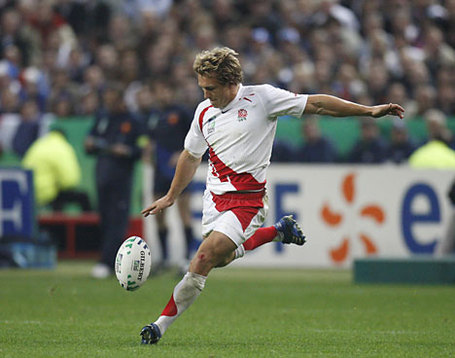 If this guy were punting a football, you could tackle him to your heart's content.  -  Image via img.dailymail.co.uk

Player Ejection
ARTICLE 1. When a player is disqualified from the game due to a flagrant personal foul, that team’s conference shall automatically initiate a video review for possible additional sanctions before the next scheduled game.  Initiating Contact/Targeting an Opponent
ARTICLE 2. When there is a foul called for initiating contact/targeting an opponent (Rule 9-1-3) that does not result in a player disqualification, there shall automatically be a video review by the conference for possible additional sanctions before the next scheduled game.
Foul Not Called
ARTICLE 3. If subsequent review of a game by a conference reveals plays involving flagrant personal fouls that game officials did not call, the conference may impose sanctions prior to the next scheduled game.

I have no problem with this, as long as it's not overused (and I sincerely doubt it will).  In fact, to the extent that additional sanctions on thuggish behaviour will lead to a decrease in its incidence, I'm fully in support of conference review of the video in question.  The NFL already does stuff like this, right?