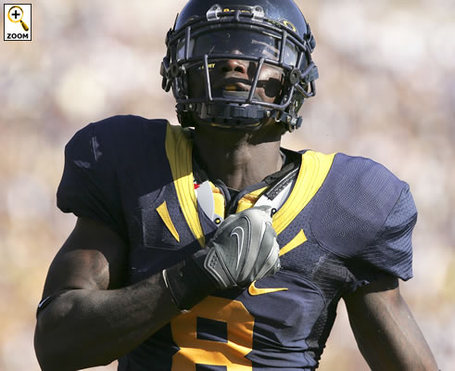 Here was Hydrotech after spring practice.

So who is it going to be? Tucker, Ross, and Boateng have the most experience so you might think it'd be them. However, we all saw sophomore Alex Lagemann blow up in spring ball. Right now he's penciled in at the #1 slot position. When Cal goes to its 3 WR sets (11 personnel), if we assume the top players at each WR position see the field then the top three will be Boateng, Jones, and Lagemann. That leaves out experienced WRs Jeremy Ross, and Verran Tucker - and puts the more inexperienced Jones and Lagemann on the field. Do we want more inexperienced WRs on the field again another year?

Several months later, we are reaching a resolution. Whether it's one that puts us at ease is an unresolved answer.

Which wideouts will Cal depend on this season? If you were to rank our receivers in terms of their depth chart position, where would they go?

More about the receivers and tight ends after the jump.

The problem with Cal receivers is that last season their touches were too few and far between. You couldn't really get a feel to each player's individual game. Here's what we can discern:

1) Route running was inconsistent (could this be a symptom of the shifting between OCs?).
2) Receivers greased their gloves and dropped the ball hundreds of times.
3) No clear number one, two, or three was established.
4) Inconsistency at the quarterback position also kept receivers from getting into any sort of groove.

That last part is crucial, because the last time that happened for Cal was in 2005, which feels like the closest Tedford-equivalent to last season (phenomenal running game, haywire passing attack). The next two seasons would be some of the healthiest for the Cal passing game.

The similarity between those two seasons diverge from there. In 2005 the Bears had three clear rising stars who were the top three wide receivers (and they would go onto replicate those performances the next two seasons). 2008, by contrast, will not be as clear-cut. The top six receivers were separated by a total of 13 receptions, and not one Cal receiver exceeded 30 catches. So while the Bears's receivers might be deeper than in 2006, production on that level is not a certainty, as the competition is expected to be fierce for every spot. You could argue that reliance on too few bodies cost us games we could've won.

Depth will not be a problem this time. The issue will be consistency. Will there be a defined pecking order as to who the top receiver is, who will move into the slot, and who can come off the bench and provide capable catches? Who will go where?

Tight ends: The Tad Smith injury means Anthony Miller will be starting this season. However, Tedford seems optimistic that the Bears can overcome Smith's absence.

Cal coach Jeff Tedford seemed optimistic that Cal still has enough depth at tight end to make up for the loss of Smith.

"It’s nice getting Spencer back," he said. "Skylar has really stepped up in this camp, thankfully. You have Anthony (Miller), you have Skylar, you have Spencer, you have (Jarrett) Sparks and you have (Garry) Graffort. All those guys are in the mix, and they’ve all done pretty well."

Nevertheless, there is a lack of playing time for each of these guys, no matter who ends up in the one spot long-term. We only know Miller because he caught a prayer throw from Longshore at the end of the Emerald Bowl, and everyone behind him has close to zero experience. In almost every case, this will be Cal's weakest position this season.

So at least here, we'll have to concede the advantage to the Furd.

"We know the game now," Cal receiver Jeremy Ross said. "Even Coach Daft is telling us to put a little style in our routes, a little flavor. We can now because we know the game. Out there running routes, we're able to put our twist on things. We're out there confident and ready to get after it."

And just what kind of flavor is Ross adding to his route-running this season?

Not many of us have been comforted by Daft's first season, but it wasn't exactly favorable circumstances for him to thrive. Let's see how this season goes before passing judgment on his worth.

The battle of the weight room: Onto the receivers. Nyan Boateng and Jeremy Ross seem to be the two incumbents staying in place. Boateng certainly looked like the most talented receiver last season, in terms of making his cuts and finding his place (it's no surprise that he soon became the favorite target of the precise Nate Longshore). But, like seemingly every receiver for the Bears, he dropped the ball far too much. Ross, while performing pure athletic acrobatics (remember the leaps!), didn't have enough experience to be anything more than semi-reliable.

However, both have shown a great deal of extroverted confidence during practice, and their work ethic in the gym has been impeccable. Who can bench more, sadly, has yet to be resolved.


Charging from the back: Verran Tucker is going to have a tough time catching up with the rest of the flock. Although he performed well in relief for the injured Calvin and inconsistent Young and Cunningham, according to Okanes he was pacing behind his counterparts this spring.

The JC transfer was the Bears’ second-leading pass-catcher among wide receivers last season, but he didn’t practice in the spring to focus on academics. With Jones and Alex Lagemann coming on, and with Michael Calvin expected to be fully recovered from a knee injury by the fall, Tucker’s status as a starter could be in jeopardy.


Speaking of Calvin, there was definitely a lot of great stuff he showed during the early part of the season, as he established himself as one of Kevin Riley's favorite targets. However, he is coming back from a torn ACL, a traditionally difficult injury to overcome for a receiver. So we'd have to expect that like Tucker, he will be coming on the rebound going against the healthier competition. At the moment though, he seems to be progressing better than Tucker.

The new faces: Marvin Jones and Alex Lagemann are expected to make huge splashes this season. Of all the receivers on this list, Jones is the most highly touted. Desean Jackson was a huge factor in Jones caming to Cal, and he appears to possess similar potential to the Eagles' rising star.


"Marvin Jones. The sophomore-to-be emerged as the Bears’ top receiver in the spring. This really doesn’t come as a surprise. The argument could be made that Jones was the most talented receiver on the roster last season, but a knee injury limited his true freshman season. Jones is healthy now and looked sharp in the spring. Despite the fact Cal has its top three receivers back from last year, Jones should enter fall camp as the team’s top pass-catching threat."

Riley says...Ultimately though, the receiver's value is measured the best by the person throwing the balls to him We give our leading QB the last word:

Riley said Jones has just continued to do what he did during the spring while Calvin, who is coming back from a torn ACL, is getting more and more healthy. "Every week as the summer has progressed, he’s gotten a little more comfortable with his route running," Riley said. "Coming back from an injury like that, you’re going to be a little scared at first on your break. Every week, he’s running routes better. He’s always caught the ball well. Hopefully he can continue to get better. He can be a guy who can really makes plays for us." Riley said Lagemann, like Jones, also continues to build off his spring, although he has been slowed by a toe injury during the offseason."

Of all the analysis above, we can bet this endorsement means the most of all.