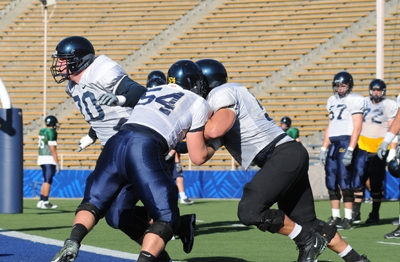 The Bears lost Alex Mack. How could they possibly be a better offensive line than before?

In short, many ways. Even with Mack anchoring the front last season, the Bears offensive line was arguably the worst it's been during the Jeff Tedford era. Injuries of the youthful O-line decimated their numbers, forced guards into tackle positions, backups to play huge starting minutes. Although the run game remained steady as ever, Cal gave up 25 sacks, for 67th in the league--by contrast, the last two seasons the Bears gave up 23 sacks combined.

Neither Riley nor Longshore enjoyed consistent pass protection, forcing them to release the ball probably earlier than they would have been comfortable with. It was certainly the reason Cal abandoned the passing game late last season and turned exclusively to "run Best up the middle behind Mack".

Nevertheless, what was our weakness last season could become our greatest strength. Players who would not normally see much playing time (Donovan Edwards, Justin Cheadle, Mark Boskovich) were granted invaluable minutes and sets on the field. All of our starters (save one, more on him later) are going to have plenty of experience, almost rivalling USC's O-line in terms of aggregate PT. So even if the Bears are hurt by injuries this season, they shouldn't be scrambling as much as they were last season, and the dropoff won't be as great.

What are your thoughts on this year's Cal offensive line? Do you believe they're better or worse without Mack anchoring the middle?

We look at the relative units of the offensive line after the jump.

Stepping into a giant's shoes--Center: Even if the Bears upgrade individually as a unit, there's no chance they upgrade at this position this season, no matter how good Chris Guarnero is. Alex Mack's ability to open up holes was the key to unleashing Justin Forsett and Jahvid Best the past two seasons as the rest of the O-line struggled with injuries. He also was an excellent call-signalerer, picked up every blitz, and .

If we measure Guarnero to Mack's standard, then he will fall short. So let's not do that. Guarnero had a fine season before it was cut short by injury, and he does have the build of a center in any case. All Pac-10 points out that Guarnero just has to be himself to succeed.

A former 4-star recruit that was ranked the 19th best offensive guard in the nation in 2006, Guarnero has been groomed to take over the center spot for the past few seasons. While he only saw action in one game in 2007, he was listed as the backup center in every game. In 2008 he got off to a great start at left guard (he played too well to be left in a backup role) before suffering a season ending toe injury.

How successful do you think Guarnero will be at replacing Mack?

The incumbents and the challengers--Guards: Here are where the big position battles are taking place, right through fall camp. On the left side, the highly touted Matt Summers-Gavin is already challenging, perhaps already overtaking Mark Boskovich for his spot, and both have already seen time taking first team snaps. During all of last season and going through spring practice, Boskovich had great stretches replacing Guarnero, but also really struggled out there, including in the Emerald Bowl as Hydro pointed out. And many are eager to see what Summers-Gavin, as one of the jewels of that fantastic 2007 offensive line class, can do on a football field.

These highlights are old, but the potential is all on display.

A little bit more under the radar, but just as vital, is the battle emerging on the right side. Chet Teofilo moves back to guard after being forced into the tackle position due to Tepper's injury, but even he'll be facing the pressure in his senior campaign. Justin Cheadle has already taken reps with the first team several times. Although Tedford is more cautious with proclaiming anything concerning the right guard battles, Teofilo will definitely feel the heat.

In any case, this competition between the four could work out to the benefit of all; with each player knowing that any slip-ups could cost them the starting role, we might see some healthy competition. And if one goes down to injury, another capable guard will be ready to take their place. A very strong situation at guards here.

Who do you see winning the battles at the guards? 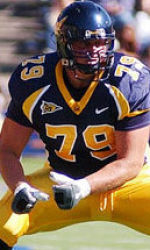 Tackles: This should be our biggest upgrade from last season. Blogger extraordinaire Mike Tepper, sophomore Mitchell Schwartz, and juniors Donovan Edwards and Justin Prueitt are a net positive over redshirt freshman Mitchell Schwartz, Teofilo, and an inexperienced Edwards and Prueitt manning the front. Cal got rushed a lot from the blind side last season with Teofilo and Schwartz having to play that side--with a healthy Tepper in place, the pressure from that side will probably alleviate quite a bit. Schwartz certainly had his ups and downs in his redshirt season, but he seems firmly cemented into his starting role. And he owns up to his mistakes pretty quickly, as evidenced in fall camp.

The first lineman to run a lap because of a false start this camp? Mitchell Schwartz, who flinched forward when Riley got up under center to call an audible. Schwartz got right up and after the play was over ran a lap around the field.

Since I have nothing real exciting to add on this front, I'll add some nuggets of wisdom from Tepper's blog about how Cal's linemen should avoid injury.

The best way to defend yourself against injury is by fast feet. Our technique as O Lineman, in short, is butt down, feet apart, hands in chest. But those feet never stop moving. They need to move rapidly because in our position the frequency of someone falling into your knees is extremely common.

Not only that but the Offensive Line is mandated to wear our knee braces. My knee braces have definitely, on more than one occasion, saved major injury. There is nothing like a Erik Robertson/ Mebane battle and either one of them tries to plant a foot for leverage not realizing its into your calf or side of the knee. Or how about a Power play where Alex Mack drives the backside D Tackle into the Tackle. Its very common.

Other than that, injuries are very common for an Offensive Lineman. Playing the sport feeling a 100 percent is very unlikely. You are almost always playing Saturdays with small injuries.

Do you guys feel Tepper, in his sixth year of eligibility, will be ready to assume his left tackle duties? Or would the Bears be better suited with someone with more continuity like Schwartz assuming this important role?

So while we should be a little down at the loss of Mack, in general the Bears offensive line should be much better in 2008. Experience runs nine deep on this unit, a luxury that only USC shares in the Pac-10. Let's hope this becomes a pleasant surprise.

As for Coach Marshall...we'll talk about him a little this weekend.