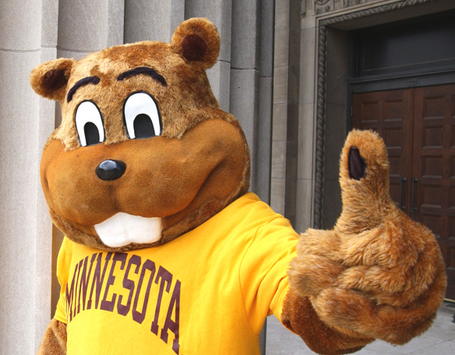 TwistNHook: Could Minnesota 09 be Maryland 08? It's early in the morning again. What's the weather looking like in Minnesota then?

I honestly have a feeling we could lose this one. The next two games after this are at Oregon and vs. USC. Two HUGE games that can affect how our Pac10 hopes go. Coach Tedford will have a job on his hands to keep his team focused on Minny and not looking forward to Oregon or USC. I think Tedford can do it, but I also think Tedford can juggle two flaming Buicks over his head while whistling showtunes from "How To Succeed In Business Without Really Trying."

So, I might not be the best person to ask.

Avinash: Minneapolis is a two hour difference (and only about half the flight time), and the weather doesn't usually get up to 90 degrees in the summer (a hot day might be 85, not much difference from a trip to LA in September).

Humidity is not going to be a huge factor; if anything we should be looking for wind. So I doubt it'll be the same as Maryland, at least in terms of jet lag, start up time and inclement weather conditions.

I don't think anyone would seriously claim that Minnesota is more talented than Cal this year, but I think this could be a dangerous game for the Bears simply because of their frustrating penchant for not showing up on the road. I don't know what it is or how to fix it -- that's Tedford's job -- but if the Bears don't show up to play like they mean it, this Golden Gopher team is talented enough to pull off the upset.

Avinash: This is indeed a worrying sign. It makes you wonder if the Bears are mentally tough enough to translate their performance from Memorial to beyond.

Have our crowds/home field advantage at Cal become so good that our teams can't translate their efforts at home to the road?

HydroTech: So you're saying that Cal really is worse than they seem, but they only win games because of the home crowd? I'm not sure if that's what you're saying but it sure sounds like you're saying something like that, and I think that's completely false.

Plain and simple, it's tougher to win on the road because of the hostile crowd, and the stress of travel (time change, weather, etc.). Those factors reduce our players' ability to perform to the best of their abilities.
We don't need fancy explanations to explain losses other than that. It's simply just harder to win on the road. Cal is no different than any other team in the nation aside from your NFL teams like USC.
Avinash: I'm saying that at Cal, there are certain conditions (the beautiful weather in Strawberry, 55-75 for most games) that make it harder for us to adjust to inclement climates. We struggle in the desert heat of Arizona and the warmer climates of LA (haven't won in either place since 2004). We struggled in the humidity of Maryland. Less so, the supportive crowd could also play a role in this.

Minnesota could actually be the closest to Strawberry Canyon climate that we'll see all year.
TwistNHook: I honestly believe that climate has very little to do with our poor road record.
Yellow Fever: I concur. I've never heard of it being the reason for any team's poor performance on the road, except in extreme cases (which may also have been flukes) - like the Tampa Bay Buccaneers' inability to win a game when the temperature at game time was below 38 degrees or something for 25 years. Of course, they then went out and beat the Eagles in the NFC Championship Game in 2002. At least it was only the second time this decade that the Eagles lost there. With two more to come.
Sorry, I've got Eagles training camp on my mind. Going there again next week! Making sure I get THA1's autograph this time! KING DUNLAP TOO

TwistNHook: Bad news for all you Cal fans attending the game. The stadium might go dry:

This fall's eagerly awaited return of Minnesota football to campus after 27 years will feature nostalgia, pageantry and fresh air. But no beer.

"We know people will drink before they get to our games. We're not naive," Bruininks told The Associated Press on Thursday. "But we do think this is the best, most responsible way to manage our game days and to really make this a high-quality experience for our fans."

Lawmakers and Gov. Tim Pawlenty had set conditions for a stadium liquor license, saying the school could sell alcohol stadium-wide or not at all. They also blocked the university from serving free alcohol to fans in premium seating areas, such as luxury boxes and club rooms.

University officials opposed the conditions, saying stadium-wide sales would be out-of-step with campus stadiums in the Big 10 and send the wrong message to students about drinking. Lawmakers argued that limiting booze to people holding expensive tickets smacked of elitism.

Avinash: So what do you guys feel is the biggest reason we've lost our ability to win on the road? To me, it seems we aren't able to execute on offense. Our defense has been relatively steady except for Arizona 2008, but our offense has really stunk it up.

HydroTech: Well, look at Tepper's blog. He said that in Oregon, it can get so loud that he can't even hear the playcall in the huddle despite Longshore being mere feet away from him. This can lead to confusion as to what play is being run. Furthermore, he said he can't really look at the defense pre-snap because that means his eyes are off the ball. He needs to keep his eyes on the ball to see the snap since he can't hear the snap count.

TwistNHook: Is this new stadium a dome? They were in the metrodome previously, right? That would seem much more likely to contain the fan noise. If this new stadium is not a dome, that might be an improvement over the previous stadium.

HydroTech: Nah, not a dome. It's open. So weather is definitely a factor.

Ragnarok: True, weather could be a factor, but I'm told that mid-September is just about the absolute best time to visit Minnesota. I'm not anticipating nearly the type of humidity we encountered in Maryland last year.

And it's true, the stadium is not domed, so sound will have a place to escape. However, sound is both highly directional, and affected by the acoustic properties of the surfaces it bounces off of. The lack of a dome won't reduce sound much, simply because most people aren't screaming at the sky when they the game is going on...they're yelling at the field. Dome-less Autzen is so loud, I believe, because the field is sunken relative to the (very close) stands, helping trap sound, and the artificial playing surface is a much better sound reflector than natural grass.

None of this is to say that Minnesota's new stadium will or won't be loud. I don't know, and perhaps no one knows until it opens up this September.

HydroTech: I think the biggest name on Minnesota's team is WR Eric Decker. Supposedly he's pretty good and definitely has a career in the NFL. He's 6'2" and 215 pounds. Last year he put up 1074 yards on 84 catches and 7 touchdowns. That's not too bad. He would have even better stats if Minnesota didn't start sucking during the end of the season. In their last four games of the season (which they lost), he posted only 10 catches for 92 yards. He did bounce back in the bowl game though with 8 catches for 149 yards and a touchdown.

Anyways, I'm sure Syd'Quan Thompson will be locked onto Decker the whole game. This will give Minnesota a height advantage since I think Syd'Quan is only around 5'10" or so.

Get in to their Women's Huddle and get the info! We need spies!

Meet and mingle with the Gopher players and coaches

Learn about the game of football, participate in team clinics and the raffle with great prizes

Get in, get the key info, and get out before your real allegiances are revealed. We have fake mustaches for you all! IT'S A FOOLPROOF PLAN!

To get serious for a second here, Cal has a trio of talented RBs to face here. Duane Bennett, DeLeon Eskridge, and Kevin Whaley are all talented players trying to get the starting role at Minn. It sounds like each has some questions, including Bennett recovering from a key injury. But, on the same wavelength, having that level of depth can be killer. Cal always prides itself on having solid backup RBs, like Marshawn, Forsett, and Vereen. Minn seems to be in that exact same boat.

Fortunately, it appears that there are some concerns at OLine. They have a converted DLineman at one spot and there are some questions about who will start at others, such as C and LG. Hopefully, our DLine experience can take advantage of some of their potential OLine confusion to keep those great RBs tied to the backfield.

Finally, an important note is that I'm reading they are replacing most of their kicking staff. At both punter and kicker there is an absolute dearth of experience. If this is a close game, kicking can loom large. Cal fans have certainly been on the wrong end of some kicking-related disasters. Now with Anger and the Italian Stallion, we are hoping to avoid that. Perhaps Minn won't be so lucky.

Ragnarok: The statistic I've heard most often associated with Minnesota is pundits touting the number of returning starters, which, at 18, is huge. Minnesota returns 8 starters on defense and an outstanding 10 starters on offense. The offensive line, often cited as a key element in determining the fortunes of the team's upcoming season, returns a crew with a daunting 96 starts to their credit -- these guys are experienced.

However, with a team like Minnesota, so thoroughly mediocre last year (and just two years removed from a 1-11 season), one has to wonder how much all that experience is worth. These guys may be salty veterans, but how talented are they, really? Moreover, Minnesota is replacing both of their coordinators from last year. A veteran group should adapt rather quickly to the changes, but it still makes them less dangerous than an experienced group thoroughly comfortable with the system that they run. 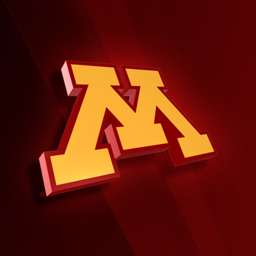 Yellow Fever: I've never been sold on returning starters being an accurate predictor of future success. Wasn't it only a few years ago that Karl Dorrell was going to finally win the Pac-10 because he had a huge number of returning starters? How'd that turn out. Returning starters really only matters if the guys returning are good, not just that they happened to start the year before too because there was no one else better around.

Though the fact that their offensive line has a combined 96 starts is pretty solid. I think more than anywhere else, experience on the offensive line can be a big factor. Maybe not so much elsewhere though.

TwistNHook: And Oregon returns an OLine with 0 starts, right?