In this tenth part of a twelve part analysis, we're going to look at how a wide receiver misalignment caused a timeout to be wasted.  In case you missed the previous installments, here is Part I, Part II, Part III, Part IV, Part V, Part VI, Part VII, Part VIII, and Part IX.

When you're through with the season and into your bowl game, there are some things that should never go wrong.   You've done them so many times, they should be second nature.  You should get these things right 99.9% of the time.  One of those things is wide receiver alignment.  Wide receiver alignment is something the wide receivers should have down pat by game 13.  This is stuff they do in practice all day long and during games.  Even though things can get a bit confusing since they do the most motion and are the ones in odd formations across the field, they should get it right all the time by now.  Cal has already had its share of wide receiver misalignment problems in 2008.  Most noticeably in the Cal vs. USC game.  In that game Cal had a beautiful touchdown pass called back for an "ineligible receiver down-field" penalty due to a WR being covered up and going down the field.  You'd think that the team, especially the wide receivers would have learned from that very costly mistake and never made such a mistake again.  Unfortunately, that's not the case.

Here's the pre-snap look below. 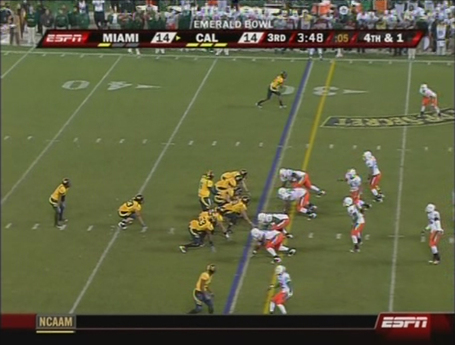 Longshore sees the problem and attempts to correct the problem.  He motions towards Tucker to get off the line of scrimmage. 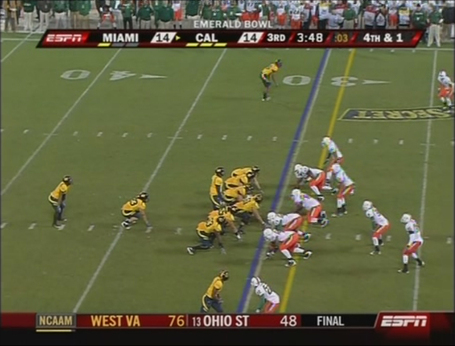 While Tucker is resetting, Longshore takes a look at the playclock.  The playclock is down to 3 seconds and probably isn't enough time to get the play off. 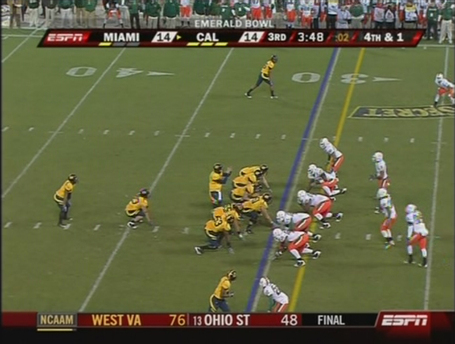 So Longshore decides to take a timeout. 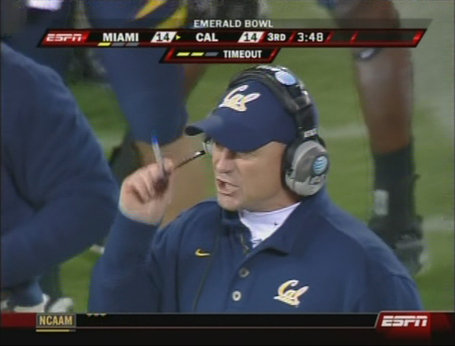 Tedford is furious.  Cal's right guard, Malele, and backup QB Riley, were also visibly upset on the play.  The target of their frustration and anger isn't really ascertainable from the television broadcast.  Who could have the coaches been upset at? Either the wide receiver, or Longshore.

Why should the coaches be upset at Tucker?  Because this is the bowl game and simple alignment errors are not tolerable this late in the season.

Why should the coaches be upset at Longshore instead?  Or perhaps in addition?  Because it's the quarterback's responsibility to get players to the line of scrimmage quickly, and to get the play off.

However, the coaches could also take some blame for the failure of this play.  Prior to this play Miami took at a timeout.  During the timeout, while the offense is conversing with the coaches on the sidelines, it's also the coaches' responsibility to watch the refs and clocks to make sure that the offense gets back out on to the field on time.  On this play, the offense didn't actually take the field until there were around 10 seconds left.  That is FAR too late to take the field.

(1) Tucker mis-heard the direction of the strength.  If he misheard the direction of the strength (which side the TE lines up on, thus determining which side Tucker lines up on), he would have thought that the tight end was on the other side of the offensive line, thus making him the split end wide receiver who is on the line of scrimmage.  Thus, that is why he thought he was on the line of scrimmage.  This possibility is the most likely reason for the error.

There is one final thing to note about this play.  This play was a 4th and 1.  Most coaches would probably run the ball to get the one yard.  If we assume Cal was going to run the ball, then Longshore, presuming he had enough time to get the play off, could have snapped the ball with Tucker still on the LOS.  In other words, both Tucker and Ross would have been on the LOS for a total of 8 Cal players on the LOS.  The rules do not allow less than 7 players to be on the LOS, however, the offense can have 7 or more players on the LOS.  If Longshore decided to snap the ball and this play was a run play, there probably wouldn't have been a penalty for the mis-alignment.  On the other hand, if this was a pass play, and if Longshore snapped the ball with Tucker on the LOS covering up the TE, Smith, and Smith released on a route, then there would be an "ineligible receiver downfield" penalty.

I don't know if this play was a run or pass.  Perhaps the play had motion and thus that is why Longshore decided to call the timeout, because three seconds on the playclock isn't enough time to do the pre-snap motion.

Here's a video of the whole ordeal.  Special thanks to Ken Crawford from Excuse Me For My Voice for creating this video.

Who is to blame for this screwup?  I'm blaming the coaches first and foremost for not getting the offense out on the field on time.  Second, I would think either Tucker and/or Smith are at fault for messing up the alignment.  Third, if this was a run play without pre-snap motion, then perhaps Longshore can get a sliver of blame for not just getting the play off despite there being only 3 seconds on the playclock.

Anyways, many fans were furious at Longshore after this play and I think their anger was vastly misplaced due to their complete ignorance of the situation.  The coaches, Tucker and/or Smith were at fault on this play moreso than Longshore.

All these errors add up to a lost timeout.  This lost timeout could have been critical.  Towards the end of the game, after Cal's kicker, Tavecchio, missed the go-ahead field goal to break a 17-17 tie to take the lead, Miami had the ball with about three and a half minutes left in the game.  If Miami scored a touchdown in that time (instead of Follett causing a forced fumble and defensive recovery) then Cal would have needed all three timeouts to preserve as much time on the clock for a desperation touchdown to tie the game.  While Cal never encountered this situation thanks to Zack Follett, it could have happened and that one lost timeout could have been a game-changer and game-killer.