My proposed total reorganization of college football generated a fair amount of criticism last February, much of it justified.  I fully admit that the plan was neither realistic nor perfect, that it was more of a starting point than a final solution.  However, what surprised me was the distribution of the criticism leveled against the plan.

Almost no one focused on how unworkable the plan was, or how the conferences as currently composed had good reasons beyond inertia or convenience of travel for their current associations.  Many of the complaints were of the narrow, "I hate what this does to my team" sort, completely ignoring the merits of the plan as a whole.  The most common complaints focused on the "have-nots" of college football, the non-BCS schools whose primary role was to be September fodder for the Ohio States and the LSUs of the world, then relegated to Wednesday Night Football on ESPN2 and forgotten by 95% of college football fans.  Some wanted these teams kept in the MAC and the Sun Belt, "where they belonged."  Some didn't care what was done with them, as long as their school's proposed conference wasn't full of those bottom-feeders with no chance at ever competing.  But the most common (and radical) solution was to simply get rid of these teams altogether, relegating them down to Division I-AA or wherever would have them (I got the sense no one would care if they all ended up in an Australian-rules football league).

I was actually surprised by how many people, commenting on different sites, seemingly independently came up with the same solution:  form 8 10-team leagues, each conference holding a 9-game round-robin to determine a champion, and then run an 8-team, 3-round playoff with those league champions to determine, once-and-for-all, a "true" college football national champion.  I was actually working on just such a proposal when RollOnYouBears667 beat me to the punch with this FanPost.  It's actually a surprisingly neat, nifty solution to many of the problems of the current setup, assuming you ignore the one tiny, inconsequential little detail:  how do you pick the 40 teams that get left out?  Who decides, and by what criteria?  As it turns out, this question is a lot thornier than you might initially guess. 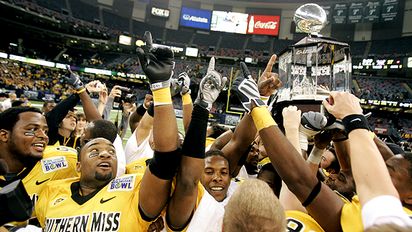 If you're going to re-org major college football, how can you leave these guys out?  -  Image via assets.espn.go.com

My first thought was to sort teams by all-time wins, and simply eliminate the losingest 40.  The Top 10 sure look about right:  Michigan, Texas, Notre Dame, Nebraska, Ohio State, Penn State, Alabama, Oklahoma, Tennessee, USC.  But after the Top 20, you get some "undesireable" results.  Miami (OH) places 23rd, and both Army and Navy are in the Top 30 (as is Cal, actually).  OK, that's not so bad.  But Central Michigan is in the Top 50, and the Top 80 also includes "have-nots" like Western Michigan, Louisiana Tech, Ohio, Akron, Wyoming, and Utah State.  In fact, with the cutoff at the Top 80, one must choose #80 between Florida State and Texas Tech, with recent BCS participants Kansas State, Louisville, Wake Forest and Boise State all left out in the cold.

OK, so all-time wins may not be the best measure of success, as Florida State is clearly a better program than Utah State, but unfortunately hasn't been playing football for nearly as many years.  What about winning percentage?  OK, this shoots Boise State straight to #1, but otherwise the top of the list looks pretty much like you'd expect.  I don't think anyone would mind keeping non-BCS schools like Fresno State and Southern Miss (both Top 30), though finding both Army and Minnesota in the Top 40 was a bit surprising.  Once again, however, the cutoff isn't as smooth as one would like, with the Top 80 including currently hapless programs like North Texas and San Diego State, while eliminating Top 25 teams like Oregon State, Oklahoma State and Cincinnati.

Yeah, but football was a lot different in 1869, or 1904, or even 1954.  What if we limited our scope to games played since 1992, the first year of the Bowl Coalition?  Again, the list is pretty good, but a couple teams that are nobody's idea of a powerhouse both crack the Top 25 (Toledo and Marshall), while recent Rose Bowl participants Stanford and Illinois both get left out.  At this point, I don't think I'm going to find an automatically generated list based on simple criteria that comes close to satisfying people.

And perhaps that's the point.  Schools change, and the fortunes of their football programs rise and fall through the decades.  Sometimes schools drop football programs entirely, while others decide to start up new ones.  Ohio State will probably be pretty good ten years from now, while Louisiana-Lafayette will probably not be.  Syracuse?  I have no idea.  And if you asked me to project 30 years into the future, or 50?  I'd start flipping coins, 'cause things change *that* much.

As a small example, let's go back to 1950.  Why 1950?  Besides being a conveniently round number, it's also the year that Joe Paterno joined the coaching staff of Penn State.  The time between then and now could reasonably be considered a "football lifetime".  In 1950:
- Florida State played only its 4th season of football ever, having just converted from an all-girls school in 1947.
- Boise State was still a junior college.
- The Ivy League was still relevant in football, its members having eliminated football scholarships only 5 years before.  Princeton finished the 1950 season a perfect 9-0.
- Army was still relevant on the national scene as well, going 8-1.  Other schools that finished major college football with only 1 loss that year:  Fordham (now a Division I-AA school), West Texas A&M (now a Division II school), and Loyola-Los Angeles (hasn't played football since 1973).
- Current Division I-A schools Air Force, UAB, South Florida, Florida International, Florida Atlantic, and Central Florida didn't even exist in 1950, let alone field football teams. 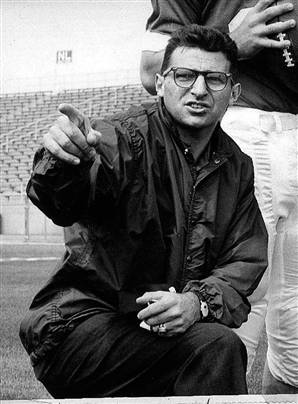 A lot has changed since 1950, but not the presence of Joe Paterno on the Nittany Lions' sideline.  -  Image via nbcsportsmedia3.msnbc.com

As you can see, college football has a long history of change.  Heck, it's only been since 1978 that Division I Football has been split into I-A and I-AA, and even in that short time, 4 of the 18 schools to have won Division I-AA National Championships have made their way up into Division I-A (Boise State, Louisiana-Monroe, Marshall and Western Kentucky).  Though I can't find any instances of a school dropping down to I-AA from I-A, I know that a number of schools have considered it, including Rice, New Mexico State, and Wyoming (caution: PDF) (these schools generally find themselves addicted to the money and exposure that Division I-A membership brings, regardless of the moribund state of their football programs).

If ever there were an example of how quickly these things can turn around, consider the (mostly forgettable) history of Rutgers.  The Scarlet Knights invented football back in 1869, and promptly beat Princeton 6-4.  Until recently, this was the high point of their program.  Princeton won the rematch a week later 8-0, and Rutgers spent the next 135 years or so being mostly terrible at the game it sired.  As recently as 2003, fans and alumni were contemplating moving down in this thread hilariously lacking in foresight:

Should Rutgers drop to I-AA?

In light of the impending breakup of the Big East, I would argue that it is time for Rutgers to consider dropping down to Division I-AA and requesting membership in the Patriot League.

I suggest this move for three reasons:

1. The breakup of the Big East leaves Rutgers without an obvious conference home in Division I-A, and Rutgers lacks the program strength and fan support they would need to be a successful independent.

2. Rutgers has had no success in football since Division I-A began.

In the 25 seasons Rutgers has played since 1978, the Scarlet Knights have beaten I-A teams with winning records a total of 13 times; or, once every two seasons. Four of those wins came in one year (1984), and only one has happened in the last eight seasons

3. Most of Rutgers' traditional rivals are in I-AA or lower.

The three teams Rutgers has played 70 times or more (Lehigh, Lafayette, and Princeton) are all in I-AA. Lehigh and Lafayette both play in the Patriot League.

Of the four teams that Rutgers has played between 40 and 69 times, two (Columbia and Colgate) are in I-AA and two (NYU and Stevens Tech) no longer compete in football.

Only in the third rank of traditional rivals -- Syracuse (32), Temple (31), and Army (31) -- do we see Division I-A opponents, but the latter two of those teams should probably also drop to Division I-AA.

I can think of no good reason for Rutgers to continue to attempt to compete in Division I-A. The Scarlet Knights' last great season was in 1976, and they will never have another one at this level. The school would be a good fit in the Patriot League, and would probably be welcomed with open arms. Returning to a natural level of competition (and playing familiar foes, and winning more often) would probably also make Rutgers football a more attractive ticket for alumni and local fans.

Though not everyone agreed with the poster, no one shot down his proposal as the least bit ludicrous.  And why should they?  Rutgers had won just three games in the previous two seasons, and showed basically no signs of improvement.  Many of their losses were of the embarrassingly lopsided variety, and their prospects for being able to compete at college football's highest level in the near future were bleak.  However, the Scarlet Knights would climb back towards mediocrity with a five-win season that fall, and then, in 2006, break out with an 11-win season, capped by the school's first-ever bowl game victory.  National attention, television broadcasts, and rankings would follow, and today, one would be laughed out of the conversation if they merely suggested leaving Rutgers on the outside of college football's Elite Eighty. 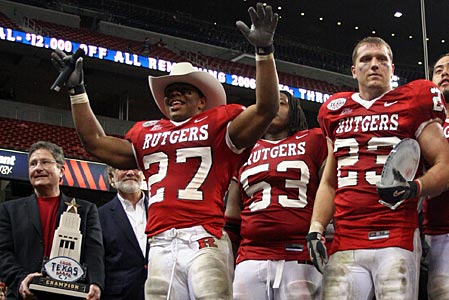 "The Scarlet Knights' last great season was in 1976, and they will never have another one at this level."  -  Image via www.scarletknights.com

And really, college football's fluidity lends support to the NCAA's current "hands-off" classification system.  The NCAA merely sets minimum standards that a program must meet to attain each classification level, and leaves to each program the decision of what classification best fits the resources available to it and the responsibility of meeting the associated requirements.  Rather than legislating from on high each school's place in the college football pantheon, the NCAA allows each program a degree of "self-determinism" that strikes me as particularly essential to the American Spirit.

So, after proposing my radical realignment of college football, why am I spending a whole post dumping on how unworkable all of these plans are?  Well, I do realize that all of these ideas are just an amusing fantasy for football-obsessed fans, but I still would like to keep this discussion grounded somewhat in reality.  And the reality is that the circumstances and fortunes of America's universities and the football teams that they sponsor do change, sometimes quite rapidly, and whatever structure that college football takes on in the future will have to account for this fluidity.  Limiting the number of teams that can compete for a national championship may allow for attractive possibilities in promoting a playoff, but such a reckless exclusion of college football's "have-nots" may end up being even more unfair than the current BCS system which it would deign to replace.