In our continued coverage of the inner workings of Cal spirit, we decided to take a look at one of the most overlooked part of, really, any Cal experience, the Carillon.  What is the Carillon, you ask?  Well, disembodied voice demanding answers, you've heard it 1,000 times over even if you never quite knew.  It is the giant music apparatus in the Campanile.  You've heard it just walking around campus or perhaps not even quite on campus and wondered what it was.  Well, wonder no further, because we take a look behind the sheet with an interview with none other than Wesley Arai.  Who is Wesley Arai, you ask?  Well firstly, really demanding disembodied voice, you have major problems with tact, secondly, I am glad you asked:

Wesley Arai is Associate Carillonist at the University of California, Berkeley. He studied carillon with Jeff Davis and earned B.A. degrees in Mathematics and Statistics with a minor in Music from the University of California, Berkeley. Wesley passed the advancement examination of The Guild of Carillonneurs in North America in 2008 and recently completed a series of carillon recitals in the northeastern United States. He works as an actuary for an insurance company in the Bay Area.

Enjoy the answers to our questions after the fold with a few more videos of the Carillon in action.  I greatly enjoy the last one's rendition of "Final Countdown" by Europe.  A version to make Gob proud.

1.  Is there a "Do not Carillon" list of songs you can't play? Like if you started playing Spice Girls on the carillon, would you get thrown in the dungeon?

I think most everything is fair game on the carillon. I hear popular music played every so often – everything from the Beatles to AC/DC to Britney Spears. Something like "All Right Now" would definitely be on the "do not carillon" list, though. 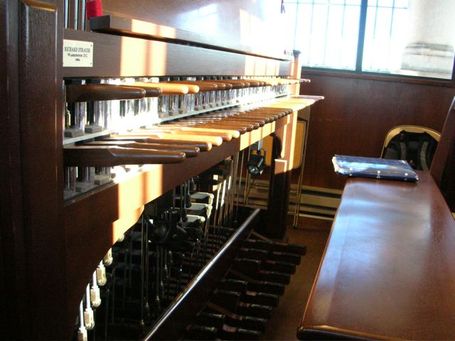 I took a campus tour during CalSO and was interested to hear the tour guide mention that that the carillon was played by people (and not a computer), and that there was a class you can take to learn how to play it. I just thought it was a unique opportunity, since carillons aren’t very prevalent here on the west coast. I also thought it’d be cool to play an instrument that everyone on campus can hear and where you don’t have to worry so much about playing wrong notes, since people don’t really know who’s playing the carillon.

3.  How exactly does one play the Carillon? 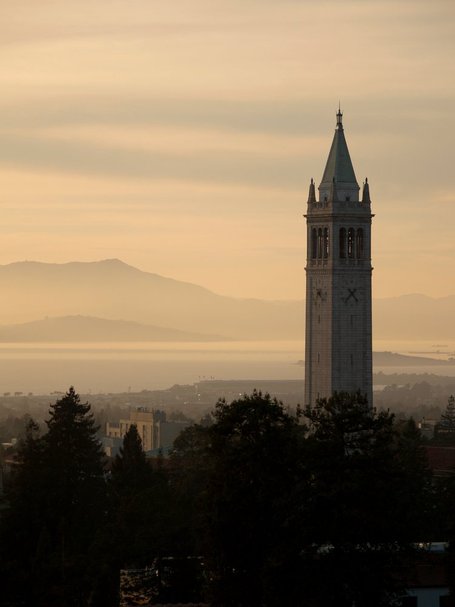 4.  What practice is required?

I know that at some universities with programs for carillon study, you work solely on a practice keyboard until you somehow prove yourself worthy and graduate to the actual carillon. At Cal, beginning lessons take place on the actual carillon, so you start playing the big bells from the outset. Between lessons, you can practice on the practice keyboard. I think 2-5 hours or so of practice per week is pretty normal.

5.  What audition process is required?

To audition for the carillon program at Cal, you would need to perform a couple of pieces on the instrument of your choice. There’s also a DeCal class where students teach students, and the requirements aren’t as formal. More information about lessons and the DeCal are available here: http://music.berkeley.edu/carillonstudy.html.

Carillon music looks a lot like piano music. It’s typically written on two staves, one in treble clef and one in bass clef. You play the top staff with your hands and the bottom staff with your feet.

The carillon is usually played by one person at a time, but there are plenty of pieces that are for two players. I’ve even heard of as many as 4 people playing a carillon at once.

Yes; there are practice carillons that let you practice without everyone on campus hearing. They look just like the real carillon keyboard, but instead of being connected to bells, they’re connected to little metal sound bars (like on a vibraphone) that get struck when you depress the batons and foot pedals.

9.  Why does the carillon always seem to sound out of tune?

The carillon sounds out of tune because of the harmonic structure of the bells. Unlike most instruments we’re used to hearing, carillon bells have a prominent minor third overtone that clashes with music played in major keys.

10.  What is the history of the Cal carillon?  When was it put in?  For what reason?

The carillon started as a chime of 12 bells given as a gift to the University by Jane K. Sather and which were installed in 1917. Over the years, more bells were added until it reached its current count of 61 bells in 1983. 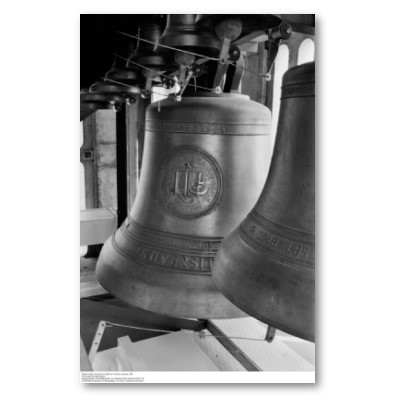 11.  Do you have to replace the carillon ever?  Is the original carillon still there?

The original 12 bells are still part of the carillon. As far as I know, none of the bells have needed to be replaced, although some other parts of the carillon have been replaced over time, such as the keyboard and various pieces of the playing mechanism.

12.  Are there only certain times a day that it can be played?

Yes; there’s a schedule of times that the carillon is played:

13.  Does it ever need any sort of maintenance or tuning?

Like any mechanical instrument, the carillon needs maintenance every once in a while to make sure everything’s working as it should and none of the parts of the instrument are worn out. The bells generally don’t get out of tune, so tuning isn’t something that’s done normally. If the bells do get out of tune after many years, they might be sent back to the bell foundry to be re-cast, or even replaced.