Your Cal Football Recruiting Update: A Talk with Bear Insider

Share All sharing options for: Your Cal Football Recruiting Update: A Talk with Bear Insider 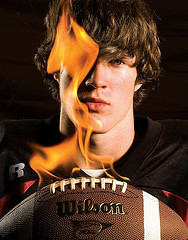 We continue our effort to beef up our recruiting coverage. Thanks to the Q&A organized earlier this week, we managed to conduct a great interview with Jim McGill, staff writer for the Bear Insider (you might know him on the message boards as Moraga Bear and his excellent status updates of Cal recruits). We discussed many of the issues concerning Cal fans on the recruiting scenes, about current commits and possible future ones. Due to the nature of the recruiting business he couldn't answer all the questions we presented, but the ones he did answer provided some very elucidating information about what things are looking like for recruits.

Here is the full interview, our questions in bold.

1) Austin Hinder appeared to go under the radar during the Elite 11 performance, not winning ANY of the quarterback awards they hand out. Should Cal fans be worried about his development, or is this much ado about nothing?

Hinder was the MVP of a stacked U.S. Army combine as well as the Colorado Nike event so he's earned his accolades. I've been to quite a few Elite 11 events and have seen how often that awards and critiques can be very subjective at events like these. With what I've seen of Hinder's build, fluidity, athleticism and ability to make plays on the move, I'm comfortable in the belief that he'll end up a better QB than many on the Elite 11 roster. Time will tell because he'll have to wait a few years for his turn.

2) Can you tell us some of the things that intrigue you the most about our current Cal recruits? What should Golden Bear fans be looking forward to about the incoming 2009 and 2010 classes?

Let's start with '09 and the defensive line. (Find out about these things after the jump!)

Keni Kaufusi was off most fans' radar after sitting out a year but the guy is a absolute bull--perfect for the nose tackle position in a 3-4. The burst, strength and motor may get him on the field this year. Deandre Coleman's another beast of a player. He's incredibly huge and has the ability to dominate at the next level, especially since he won't be stuck playing virtually every down on offense, defense and special teams like he did in high school -not an easy task for such a big guy.

In the defensive backfield, Alex Logan has the potential to be a future star at safety. He hits like a truck and he has great ball skills--a great combo. Cornerback Steve Williams also has great talent, too, and may be a future Syd'Quan Thompson. They're both a bit undersized but play much bigger than they are and both have very strong ball skills, too.

At linebacker, I love Jarred Price. What he lacks in height, he makes up for in incredible burst, motor, strength, speed and aggresiveness. He turns the corner on the blitz in the blink of an eye and is a huge hitter. If he stays healthy, I'd expect to see him make an impact this season.

On the OL, a pair of guys that were overlooked by many are absolutely huge, with real nasty streaks--Charles Ragland and Charles Siddoway. The roster lacks depth at OT and this pair will bring quality depth in right away--as soon as they learn the offense.

And the most exciting player of all--at least on the high school level- is utility back Isi Sofele. There are a lot of backs, returners and slot players with speed but VERY few have the sheer athletic instincts Sofele possesses. His field awareness, agility, burst and strength for a smaller back make him an explosive package that has the potential to do some incredible things in his Cal career. Don't be surprised if he plays year one.

For the '10 class, things are shaping up very nicely. This will be a monster offensive line and linebacker class. All three linemen are very strong and D1 size already and all have the mean streaks you love to see in a lineman. They may well be joined by one or two top linemen in Arie Kouandjio, Chris Ward or Nick Rowland.

At linebacker, you've got a nasty, playmaking machine in David Wilkerson, an incredibly athletic rush backer in Cecil Whiteside with tons of upside and a well-rounded star pursued by a boatload of top programs in Nick Forbes. Don't be surprised to see them joined by Owa Odighizuwa, who would be a tremendous pickup.

I believe the defensive line will be very strong as well. It got off to a good start with Cal's first commit of the class in Jay Guy and he'll likely be joined by a pair of top ends, like Cassius Marsh and Gabe King, especially if Cal has a strong season.

3) How many scholarships is Cal likely to have to offer come next February? Which is to say, how many players are we likely to sign?

When it's all said and done, I'd expect to see 20 or 21 in this class--a fairly small number that will artificially hold Cal's class ranking lower than the quality of the class will likely justify.

4) Will there be a superstar wide receiver coming our way soon in the mold of Desean? Or is Tevin Carter already that guy?

There are very few DeSean's in any given year and I don't see anyone out there like him this year. Tevin Carter has the size/speed combo that could make him a star and I think we'll see another top receiver like Kenny Stills, Robert Woods or Mike Davis join him along with a third quality end (Note: This question was asked before the Harper and Dunn commitments)

5) Among defensive line recruits with offers, can you break down which ones are slated for tackle, end, or hybrid DE-LB?

6) Have there been any hints of players wanting to decommit from other schools to join up with the Golden Bears?

Yes, Cal already got one decommit in Tevin Carter and I'd be surprised if there weren't a couple more when it's all said and done, especially in the era of early commitments.

7) Looking around the Pac-10, who's been impressing you the most in terms of their recruiting accomplishments, and who's been underacheiving?

USC continues to be a recruiting machine and reloads every year. UCLA brought in some quality players last year but is off to a slow start this year. Stanford recruited over their heads last year considering their record but their class is particularly imbalanced, with nearly half their class comprised of tight ends and defensive ends. They filled up most of their class early this year but the average recruit quality isn't very strong. Sarkissian's started fairly strong at UW, but he'll have his work cut out for him building and hanging onto a strong class with that roster of theirs and the likely results it will yield this year.

8) Despite having a deep secondary already set in, should it worry the Bears that they haven't made any inroads yet on a strong California secondary class? If not, is there anyone Cal is looking at, or is it just not a priority?

The secondary is not a recruiting priority this season. With limited slots, they're looking to fill up on OL, LB and WR and will likely only have room for a pair of defensive backs -possibly two safeties. They're pretty deep in the secondary, especially bringing in JC safety Chris Moncrease late this season. He'll have three years eligibility.

We thank Jim from the Bear Insider, and we hope to talk with him in the future about Cal recruiting.