In this ninth edition of a twelve post analysis, we're going to look at how Cal's zone blocking creates a numerical advantage at the line of scrimmage.  In case you missed the previous installments, here is Part I, Part II, Part III, Part IV, Part V, Part VI, Part VII, and Part VIII.

Typically in Cal's man blocking scheme seven blockers would take on the seven defenders in the box (usually the four defensive linemen and the three linebackers).  For an example of this, see the 8th picture of my old Maryland analysis post.  Such a situation is great.  Seven blockers and the seven nearest defender are blocked.  But remember in my previous zone blocking post (Part IV), I pointed out how since the typical zone running play moves so quickly and away from the backside defensive end that the offense leaves the backside defensive end unblocked since that defender can't get to the play?  What's the result of doing such an act?  The defense loses a defender on the play and the offense can use that would-be-blocker somewhere else to block.

Let's see this in action.

Below is the pre-snap read. 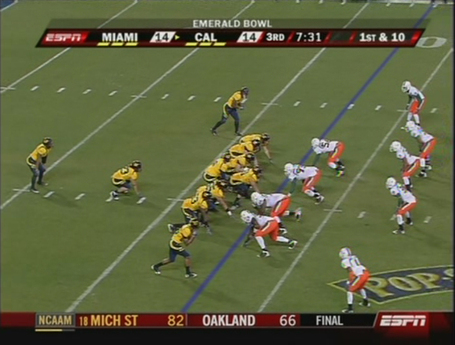 Cal is facing a 1st and 10.  Cal has 21 personnel on the field (2 backs, 2 WRs, 1 TE) .  Miami counters with a 4-3 defense with their linebackers shifted over slightly to the strong side.  The offense's strong side is the offense's left side because the tight end is to the left. 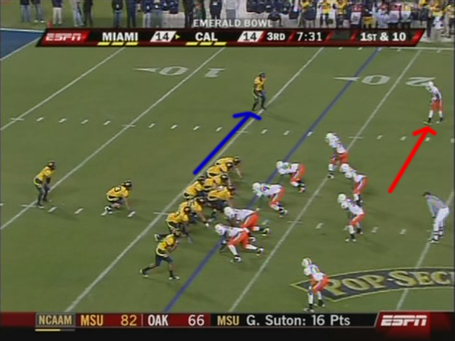 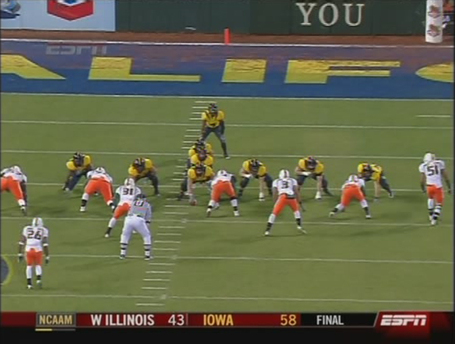 Here's the pre-snap read from a better angle.  Note Miami's strong side linebacker #51 (SLB or Sam) creeping up on the line of scrimmage (LOS) on the right side of the picture. 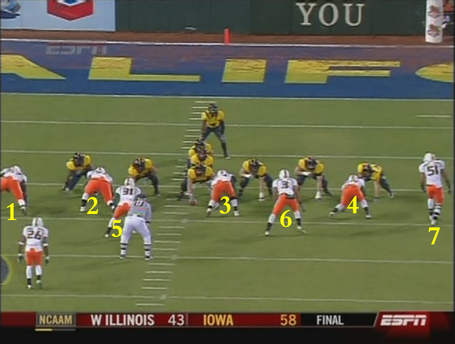 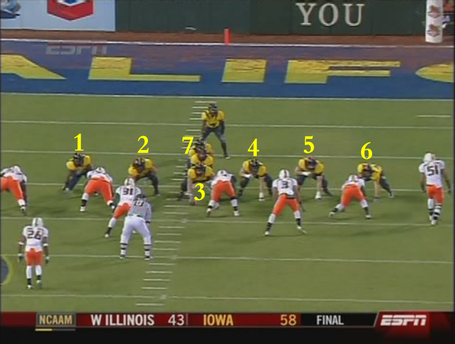 Cal has seven blockers on the play.  Cal has five offensive linemen (numbers 1 through 5), a tight end (number 6), and the fullback (number 7).  So if Cal was running it's typical man blocking scheme that was used often back in 2005 and 2006, things should be just fine.  Seven defenders, seven blockers.  But Cal has become predominantly zone running team in 2008.  Cal will zone block out on this play and gain a numerical advantage. 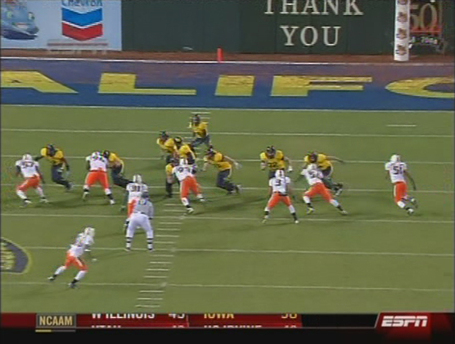 Here's the picture immediately post-snap.  Notice all the Cal blockers have stepped to their right flowing the zone right.  The Miami defenders have all ready this flow and have also started moving playside (the direction that the run play is going which is the offense's right and defense's left).  Also interesting to note that Cal is running this zone play to the weakside.  In other words, away from the tight end.  This is somewhat interesting because traditionally, when Cal runs out of the I-Formation Cal will run towards the strength probably around 90% of the time - another tendency. 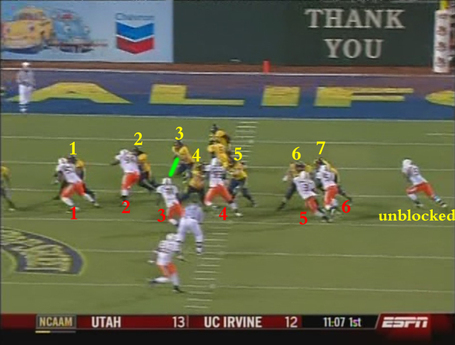 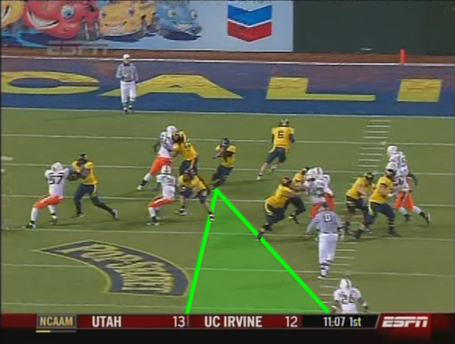 Because Cal has seven blockers on six defenders, Cal is able to double team a defender somewhere.  This double team isn't necessarly pre-determined.  The blockers will just double the most dangerous defender in their area/zone.  On this play, the double team occurred towards Cal's left tackle (LT) and tight end (TE) on the right side of the picture.  On the right side of the screen you can see Cal's LT and TE both focusing on Miami's right defensive end (who is the backside DE).  Just above the Cal LT and TE you can also see the Miami SLB who was left unblocked attempting to re-assert himself into the play but because of his bad positioning he fails.  Cal's runningback, Jahvid Best, has a huge lane opening up for him. 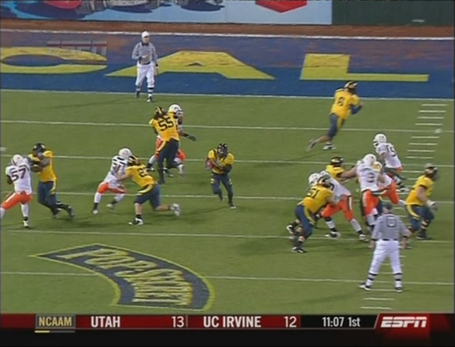 So this is one advantage of the zone blocking scheme: it creates a numerical advantage.  Because the zone blocking runs flow at such a wide angle to the outside, the offense can leave the least dangerous backside defender unblocked, thus using the would-be-blocker somewhere else creating a stronger run block.