In this fourth part of a twelve post analysis, we're going to look at Cal's Zone Blocking scheme.  In case you missed the previous installments, here is Part I, Part II, and Part III.

Through most of the Tedford era Cal has used a man-blocking run scheme with a pulling backside guard.  Most Cal fans are familiar with this scheme since it has been dissected on this blog and other blogs.  However, every so often Cal has called zone-blocking run plays too.  In the 2008 Cal @ Maryland game, Cal switched to its zone blocking scheme for most of the game due to Maryland's unusual 3-4 defense but remained largely ineffective.  As the 2008 season progressed, Cal used more and more zone blocking and improved their execution as the season wore on.  In Cal's final two regular season games, Cal's zone blocking gashed Stanfurd and Washington.  The effectiveness of the scheme did not stop with the end of the regular season and carried on into the 2008 Emerald Bowl where Jahvid Best used his excellent vision to see a cutback lane in the zone blocking and scored on a 42 yard touchdown. 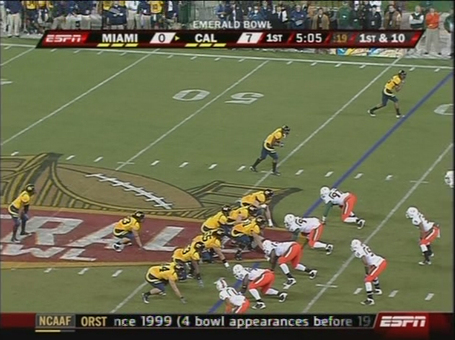 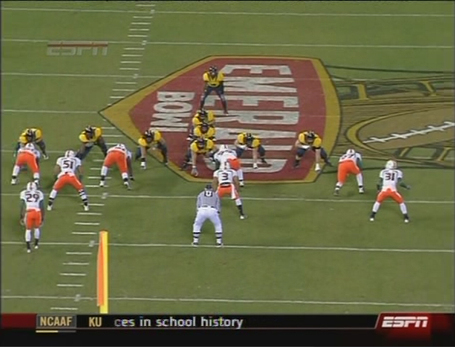 Above is another pre-snap picture. 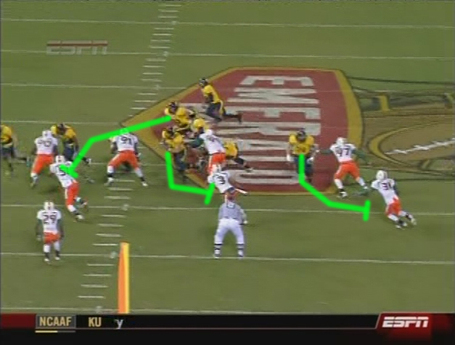 Here is the post-snap picture.  Every offensive player along the line of scrimmage takes their first step to their right cluing the defense into the direction of the run.  Cal's left tackle will let the Miami defensive end (#97) go unblocked on this play because the run is to the offense's right and the defensive end is already behind the play.  Instead, the Cal left tackle will focus on the weakside Miami linebacker (#31) because that player is more of a threat to stop the play due to being further back on the field.  On zone runs it is typical for the backside tackle to not block the backside defensive end and instead immediately move to the second level.

Cal's right guard, and right tackle have picked up the Miami defensive tackle and strong side defensive end respectively.  Off the screen, Cal's tight end has picked up Miami's cornerback on the edge.  In the backfield, Cal's fullback is looking through the linemen in front of him towards the Miami strong side linebacker (#51). 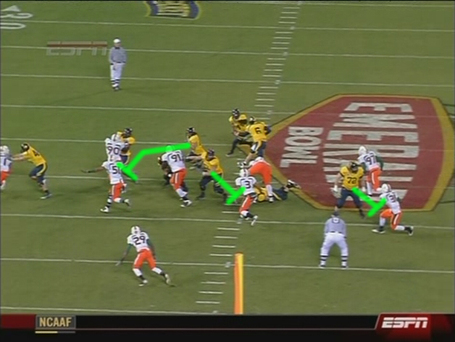 In the picture above, you can see Miami had 8 defenders in the box (4 defensive linemen, 3 linebackers, 1 defensiveback).  I am not counting Miami's safety #29 since he is further back and outside of the immediate box.  Cal only has 7 blockers in the box (5 offensive linemen, 1 fullback, 1 tight end).  Because Cal is out numbered, this would normally be a tough play to gain yardage.  However, because the zone run attacks the defense at such a wide angle (more east-west rather than north-south) it takes the backside defensive end out of the play instantly.  That is why Cal didn't even bother blocking the backside defensive end.  And thus Miami only really has 7 defenders in the box who are in position to stop the play (3 defensive linemen, 3 linebackers, 1 defensive back).  So the numbers are really 7 blockers on 7 defenders.  Assuming Cal's two wide receivers can block their defenders then the ball carrier, Jahvid Best, only has one defender to elude (#29). 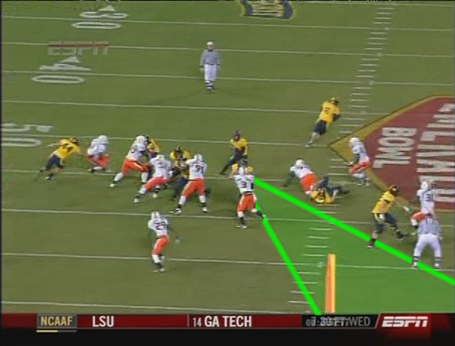 Miami does a nice job walling off the playside of the offense (the offense's right side).  However, because they know of Best's deadly speed, they have over-pursued and left open a cutback lane.  Zone blocking is known for having cutback lanes because the defense often is in such a rush to wall off the point of attack due to the fact that there are so many more blockers at the point of attack in a zone-blocking scheme than a man-blocking scheme.

Most of the time the cutback lanes aren't as huge as they are in this play.  Additionally, not all runningbacks can see the smaller cutback lanes.  One of Javhid Best's greatest assets is his vision.  Although this cutback lane is huge, if it was much smaller, Best probably would have seen it anyways and ran through it.  Jahvid Best has exceptional vision and can perform just as well in the zone-blocking scheme as he does in a regular man-blocking scheme. 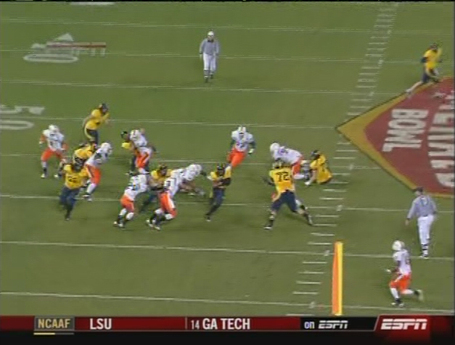 Jahvid Best bursts through the cutback lane and wisely covers up the ball with to prevent the ball from being stripped on his way through defenders. 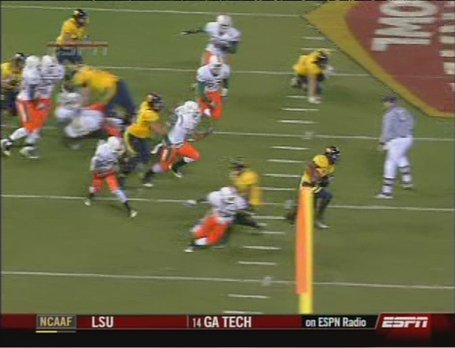 Why did Cignetti call up zone blocking on this particular play at this moment in the game?  Perhaps because Miami was being very aggressive on defense.  Miami had been swarming the ball thus far in the game.  Cal ran 6 run plays prior to this play, and only 2 had gained more than 5 yards.  Miami was clearly keying in on the run.  Zone blocking is all about movement; specifically getting the defense to move quickly to the playside.  By calling up a zone blocking run, Miami would be quick to wall off the playside of the offense to prevent Jahvid Best from penetrating, but as I said earlier, overpursing on a zone blocking scheme can lead to cutback lanes.  That's exactly what happened in this situation and it cost Miami a touchdown.