HoF Round of 32: Joe Igber vs Matt Biondi

Share All sharing options for: HoF Round of 32: Joe Igber vs Matt Biondi 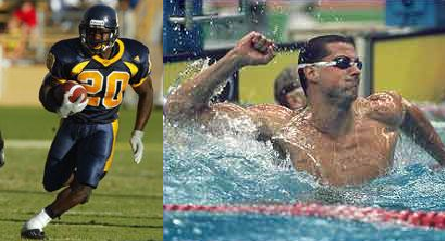 We move onto an Olympic swimmer who mixed victory with agony versus a Cal running back who was the purest form of student-athlete. For each athlete, you can vote in the poll; it closes a week from today. After the jump, you can read the athlete profiles written up by our commenters, and discuss in the comments your memories of each athlete and which one deserves to move on. (Check out the full bracket here. To check out the original nomination thread, click here. For those who want to track the CGB Hall of Fame posts exclusively, click here or right next to the timestamp where it says "Hall of Fame".)

I'll let BearStage talk about him.

Twist has a little anecdote from his youth about the Olympian.

I grew up in Biondi's hometown of Moraga, CA. I swam as a kid at Moraga Valley Pool, his childhood swim team (M-O-R space A-G-A space V-A-L-L space E-Y!), where his brother held all the records. I went to his high school. I went to his college. I think I was even there when they dedicated a rock fountain to him after his Olympics.

Guess the lifeguard didn’t recognize him.

Biondi was swimming with his son Nate, in the deep end of a pool in Hawaii. The lifeguard shouted at Matt to take Nate to the shallow end, because the child was not a good enough swimmer.

When the Biondis did not move, the lifeguard repeated the request and added to Matt, "You’re not a very good swimmer, either." Biondi, dumbfounded, resisted the temptation to identify himself. He and Nate went to the shallow end.

So much for Matt Biondi, Olympic Hero.

Here are two of his most famous races available on YouTube from Seoul: The 50 m freestyle & the 100m butterfly. Biondi is Lane 4 from the bottom race here (and the dialogue is in Spanish). One of these is an epic win, and one of these is an epic loss (what is being a Cal athlete without some heartbreak)? Feel the pathos.

Here is some additional information on Biondi from Wikipedia:

Biondi set the first of his twelve individual swimming World records in 1985. He was the first man to swim the 100-meter freestyle faster than 49 seconds, and by 1988 he owned the ten fastest times swum in that event. He won a total 24 U.S. Championships in the 50, 100, and 200-meter freestyle events, as well as the 100-butterfly. In two World Championships (1986 and 1991), Biondi won 11 medals including six gold. During his career, he was a James E. Sullivan Award Finalist, the UPI Sportsman of the Year, the USOC Sportsman of the Year, and twice the Swimming World magazine Male Swimmer of the World (1986 and 1988).

Biondi was involved in perhaps the most notable defeat of any competitor at the 1988 Seoul Olympics. In the 100 metre butterfly final, caught between strokes as he approached the finishing wall, he chose to glide rather than take another stroke, & was pipped by Anthony Nesty of Suriname by 1/100th of a second.