In this third part of a twelve post analysis, we're going to look at a failed screen play.  In case you missed the previous installment, here is Part I, and Part II.

Throughout 2008, fans seemed to complain quite frequently that screen plays failed to work effectively against the opponent.  I think the easiest explanation for why they failed was merely that Cal wasn't doing a great job blocking at the point of attack. 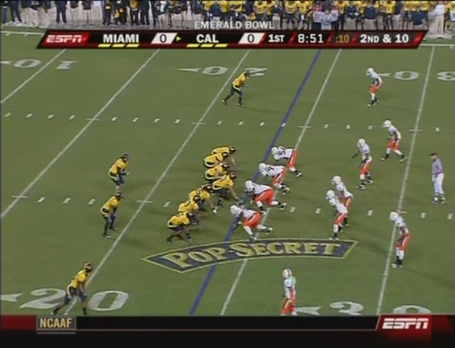 Specifically, this play is a screen play.  Screen plays are designed to let the defense penetrate by feigning poor pass blocking, then passing the ball over the defenders to the intended receiver who is now behind the defensive linemen who have penetrated. 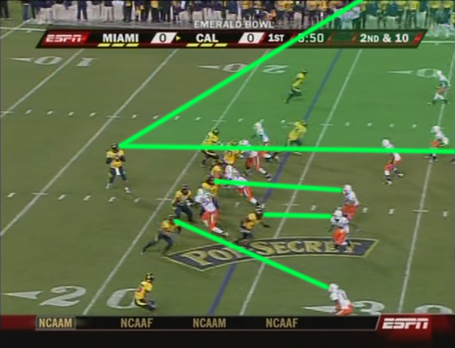 Above is the post-snap look.  The quarterback, Longshore, looks left to sell the play as a pass to the left hoping to move the Miami safeties to the offense's left.  I've drawn lines from Cal's left guard, Malele, showing his assignment on this play.  I've done the same for Cal's tight end, Morrah, and also for Cal's runningback, Best.  If all three of these blockers can take out their assignments then Cal's intended receiver, Tucker, can probably obtain a good gain on the play.  However, Morrah (the Cal player on the second "P" of the "Pop-secret" writing) is already bringing down his head to cut block. 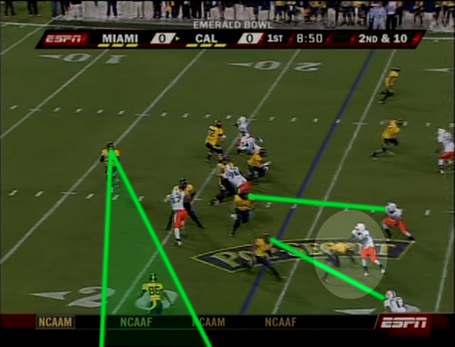 Because Morrah didn't keep his head up later to get a good look at his target, he misses his block.  I've circled the missed block above.  Cal's left guard, Malele, is still locked on to his assignent.  Cal's runningback, Best, is still locked on to his assignment.  Cal's quarterback, Longshore, has now targeted the intended receiver on this play. 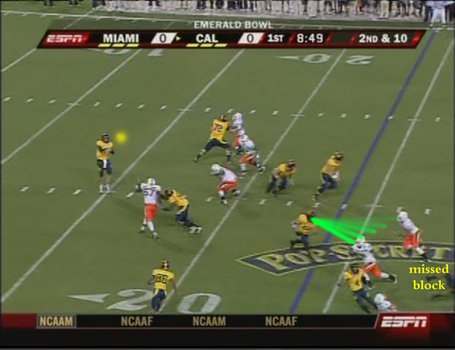 Morrah has missed his block completely.  Morrah's feet can be seen on the far right side of the screen by the words "missed block."  Cal's right guard, Malele, has now attempted to remedy the situation by coming off his assignment, and instead taking Morrah's assignment (see the changing green line above) who is the current most dangerous defender.  Cal's quarterback, Longshore, has thrown the ball (highlighted yellow). 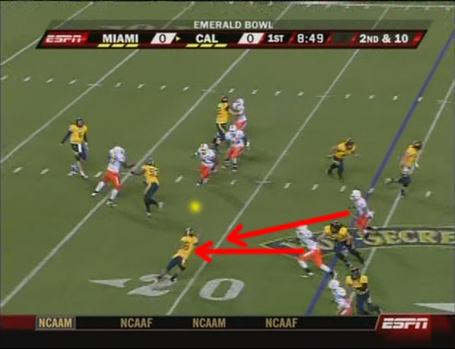 Unfortunately, Malele doesn't have the angle to take out Morrah's assignment because Malele wasn't orginally assigned to that defender.  Malele misses the block completely and two Miami defenders are closing unimpeded to the intended receiver. 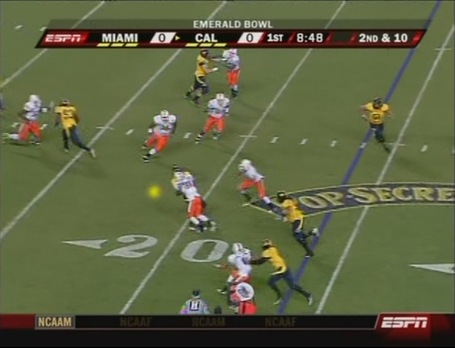 The play is broken up due to the big hit on Tucker.

In my previous installment, I suggested that many of Cal's early problems were due to execution problems.  Again, Cal has execution problems half way through the first quarter.  Morrah didn't execute and lost his individual battle.  The play resulted in an incompletion because of this.

It only takes one player to lose his individual battle to cause a play to fail.  Had Morrah made his block, this play could have resulted in a completion and positive yardage.

At this point in the game, Cal has run eight offensive plays and committed four execution errors (#1 - high pass & dropped ball; #2 Mack loses pass block battle; #3 Vereen fumbles; #4 Morrah misses block on screen).  The television announcers were attributing Cal's offensive woes to Miami's great defense - especially after this play. However, the reason why I wanted to go over this play because Cal fans in the stand, as well as the TV announcers, were fooled by this play.  Everyone thought Miami had just blown up an easy screen because Miami's defense is so great.  WRONG.  Miami blew up a screen because Cal missed a block.