Share All sharing options for: Learn more about the UC Cannoneers Part 1 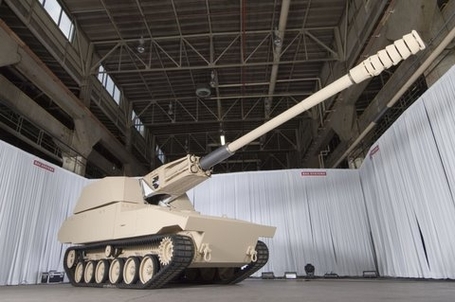 "Maybe we should use this to celebrate Cal scores!" via www.cannonartillery.com

We here at the California Golden Blogs are embarking upon shedding light upon the spirit activities at Cal.  There are so many different aspects to gamedays than make them so different from other sporting events.  Like the marching band.  Like the dance team.  And also rally comm.  We've already started looking at some aspects, like with our interview with a former Cal dance team member and our interview with the incoming Drum Major for the marching band.

This time out we take a look at a part of the gameday experience that EVERYBODY sees, or more accurately, hears, but knows very little about:  Cannoneers.  Reader Yes We Cannon was a UC Cannoneer and answered some questions of ours.

For those who have never attended a Cal game, there is a cannon up on the hill behind the stadium.  Everytime Cal scores, the cannon goes off in celebration.  And who manages this, but the UC Cannoneers.  We've split the answers up into 2 posts, because they are chock full of cannoneering goodness.  Here is Part 1.  Learn more about it after the fold!

What inspired you to join the Cannon Crew?
My first game with the Cannon was the Washington State game in 2005 (7:15PM kickoff). It was totes cold that night as the game went on, but the whole experience was nothing short of awe-inspiring. From the Cannon platform, you can see the sun setting over the Bay, the band's actual formations (it's difficult to see, from Rally Committee's low vantage point in the stands, unless you look at the Bearvision screen), the card stunts during halftime, the arms that go up on third down, etc. All that compounded with the fact that the entire set-up is run by students, (overseen by a licensed pyrotechnic operator), and tends to happen without incident made it all kinds of difficult not to fall in love. There’s something about being a part of something that gets to a whole lot of people without the recognition of having people notice you that really appealed to me, and what eventually got me to apply to become a Cannoneer. 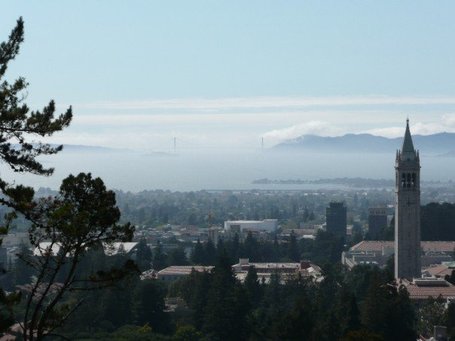 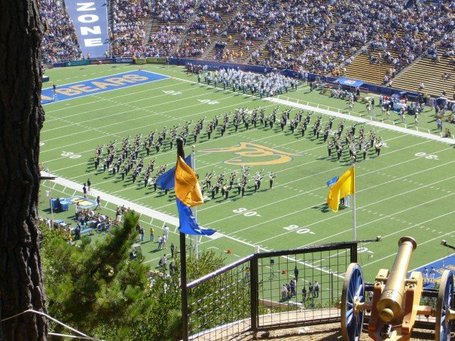 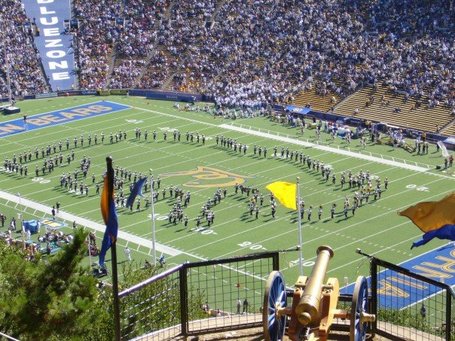 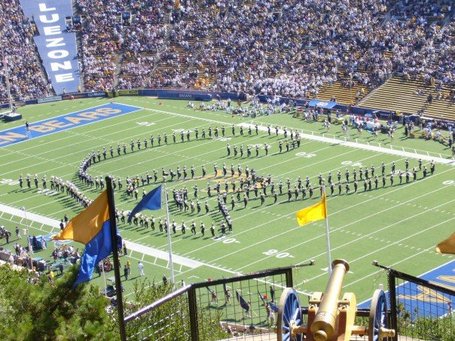 How does one join the Cannon Crew?
The Cannon Crew's made up of about 8-12 Cal students who're involved in the UC Rally Committee. The Cannoneers take sign-ups for the crew at the UCRC meeting preceding the game, and often welcome as many people as they can without having an oversized crew. It's easy stuff to be a part of.

What sort of weekly preparation is required?

For each game, we need to fill out permits and submit them to the campus, schedule a pyrotechnic operator to come out and stick with us (it's not so bad, they get to watch the game for free and get fed (as they'll feed you if you ever work one of their shows)), and recruit a crew to help out for the game. Surprisingly, the recruiting of the crew can be the most difficult part, because there aren’t many people who are willing to sacrifice not being in the stadium/(student section) for a game. What they don’t know is that it’s totally worth it (even if the only games you end up in a stadium for are the LA game and Big Game).

What sort of pre-game preparation is required?

Once the Cannon arrives on Tightwad Hill, we gather the rest of our crew and run through a safety talk, detailing how we lower the cannon and how to keep all of one’s limbs while doing so. We then split the group up and lower the cannon as stated below, using a truck, a steel cable, and a safety harness (there’s more to it, but those’re the basic requirements). Once the Cannon is safely down, the Cannoneers tie ropes from the trees at the top of Tightwad Hill for people to use to climb down relatively safely. To satisfy worried minds, yes, the ropes are safe to use – tying secure knots is one of the first things Cannoneers are trained in and tested on. We again split up the crew to do the pre-game jobs: setting up the caution tape perimeter down Tightwad Hill, setting up the blue and gold flags (which were made by a Director of Card Stunts from the early ‘70s), tying the "CALIFORNIA" banner on the front of the platform, and setting up the firing box and wires for the first game.

What in-game work is required?
During the game, the Cannoneers and the Cannon Crew are watching the caution-tape perimeters, making sure people stay on the outside of the perimeter. If we've yelled at you, I apologize, but the fact is that that's a California state law, and we've got people looking over our shoulders making sure we're doing the job right. The Cannon's one of those traditions that's run by students until someone screws up, and we don't intend on letting anyone else screw up for us anytime soon.

In addition to that, it's the Cannoneers' job to make sure that the Crew's doing well and are taken care of, and to pay attention to the game such that they're ready to fire at any time. One Cannoneer usually is in charge of that, the other watches the perimeter. 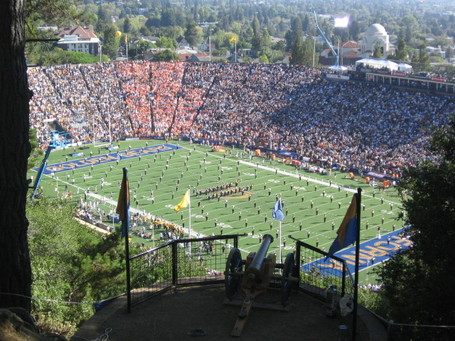 Take us through the process when Cal scores.
If you watch a Cal home game on television, you'll see a few times after a score (touchdown, field goal, or safety (not extra points)) where the camera will cut to a shot of the Cannon, then have to cut away before it fires because it's taking too long. The reason it's taking too long is that the Cannon doesn't fire for points until the head referee (the one with the white hat) signals that the score is good. Charges are expensive, and our mistakes are pretty noticeable, so we do what we can not to misfire. However, I’ve heard stories that in the 1982 Big Game, the Cannoneers fired as soon as the touchdown happened, rather than waiting for confirmation from the refs, in order to let the referees know what the right call was.

When Cal's about to score, one Cannoneer will yell out "ARMED!" in order to alert the people nearby that the Cannon's going to fire. As soon as the head referee signals the score, the Cannon fires (one of the members of the Cannon Crew actually gets to push the button to fire it) and the two Cannoneers rush down to the platform to reload the Cannon before the next kickoff so they're prepared in case through some amazing situation Cal scores again right away. (If you look up at the Cannon platform during the game, you can see the yellow and blue striped rugby shirts the Cannon Crew and Cannoneers wear, and after a score, you can see the Cannoneers at the Cannon, reloading it. After reloading, we make sure the Cannon's good to be fired again, then wait for the next Cal score/victory.

If the Cannon  Crew member was lucky, we’ll recover the wire that connected the charge to the firing system when we head down to the platform, and they get to keep it as a souvenir. 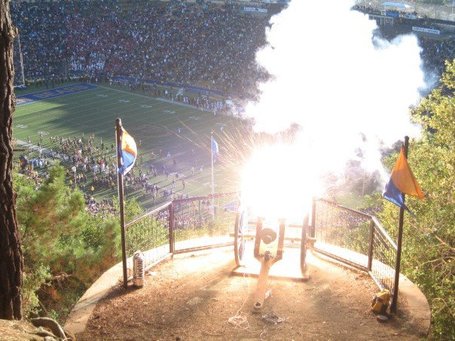 What post-game work is required?
We go back to work almost as soon as the clock runs out and we (if all went well) fire that last charge for the day. We basically undo all we did before: picking up our trash, taking down our caution-tape perimeter, and waiting for people to clear Tightwad Hill so we can bring the Cannon back up the hill. Then it's exactly what we did to lower it, just in reverse (much easier, which is nice when you’re tired), load the Cannon back up in the truck, drive it back to its home, make sure we weren’t followed, then head back to Berkeley and drink to California ‘til we wobble in our shoes. And sleep, because we’re tired. Mostly sleep. 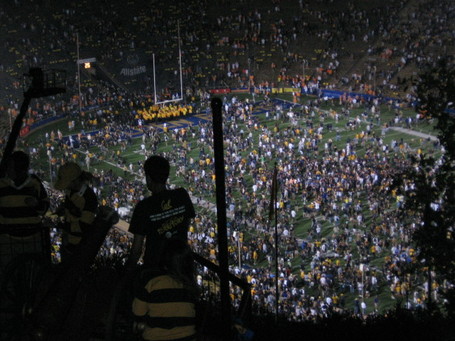 So, there is Part 1.  Part 2 with the rest of the answers will be coming soon!  GO BEARS!