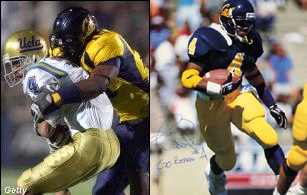 We're getting close to wrapping up the Round of 32. Two of Cal's fiercest football players face off in what should be a very close matchup!