In this seventh part of a twelve post analysis, we're going to look at how the Miami Hurricane defense blitzes Cal's A-Gap again to get quick pressure on the quarterback, and how Cal attempts to notify the quarterback.  In case you missed the previous installments, here is Part I, Part II, Part III, Part IV, Part V, and Part VI.

In the first part of this series I showed how Miami was quickly blitzing the A-Gap of Cal's offense line to get quick pressure on the quarterback.  I suggested that this was something that was going to occur again throughout the game and may be indicative of Miami's defense strategy.  On the following play, we'll see the defensive tactic in use again, and we'll also see how Cal's offensive line is ready for it. 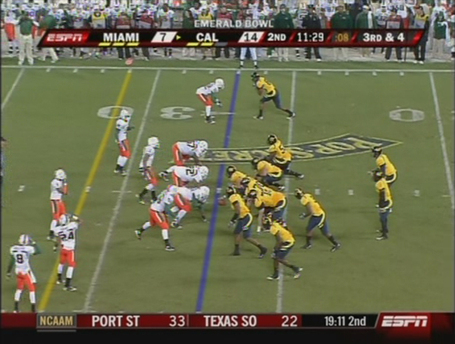 Cal has 11 personnel on the field (3 WRs, 1 TE, 1 RB).  This should not be confused with 11 players on the field.  Cal's quarterback, Longshore, is in shotgun and there is a bunch formation on the left side of the offense.  The offense is facing a 3rd and 4 in their own territory. 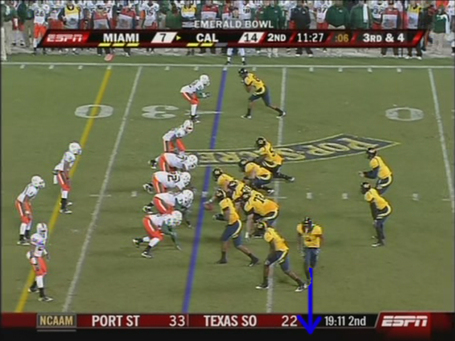 Cal moves wide receiver, Ross, in motion to the offense's left (indicated by the blue arrow). 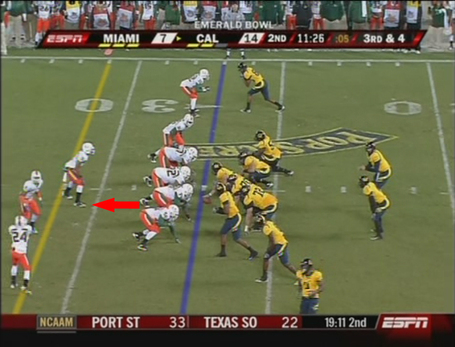 Prior to the snap, a Miami linebacker attempts to "jump" the snap on his blitz - in other words he attempts to get a head start on the offense by moving towards the offense prior to the snap to quickly get by the offensive linemen or surprise the offensive linemen.  The linebacker's foot comes forward (indicated by the red arrow), and he leans forward.  You can compare the picture above with the other pre-snap picture (the 2nd picture in the post).  The linebacker's change in stature and stance makes it quite obvious that he was attempting to jump the snap.  It's even more obvious on video. 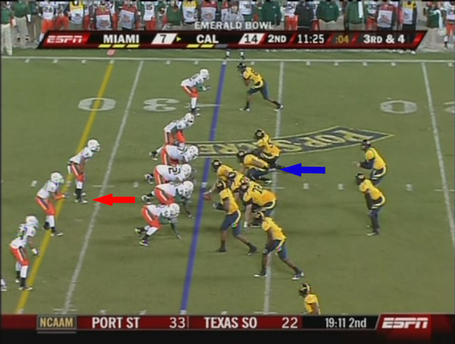 Once the Miami linebacker realizes he attempted to jump the snap too early, he steps back and attempts to hide his blitz.  I've shown his foot stepping back with the red arrow.  However, the Cal offensive line saw this.  Specifically, Cal right guard, Malele, saw the attempted jump and has given Longshore a signal.  If you look closely (and I know it's very hard to see) Malele's left arm is out back behind him.  He is giving Longshore a hand signal.  This signal is the fan signal, meaning that another defender other than the defensive lineman is going to be pass-rushing, and that it's the responsibility of the runningback to pick up that defender.  The offensive lineman giving the fan signal will not be picking up the additional pass-rusher.  So on this play, it is now Cal's runningback's job to pick up the blitz. 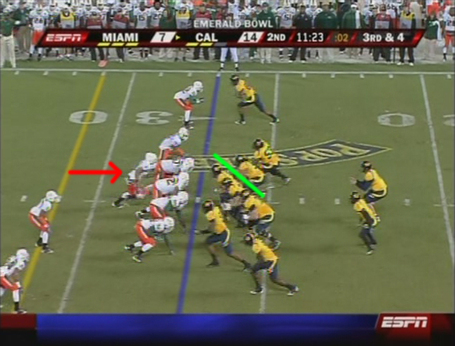 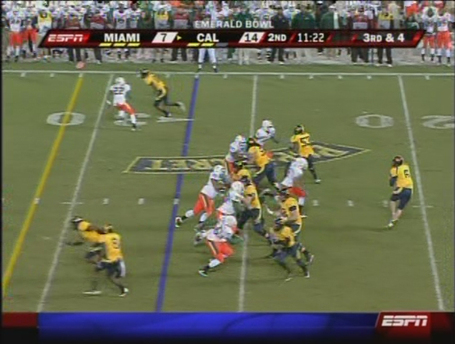 As I said earlier, it's the responsibility of the runningback to pick up the additional pass rusher - that is if the runningback isn't running a route.  Unfortunately, on this play, Jahvid Best is running a route and releases.  Longshore already knew this, and presuming he saw the fan signal from Malele, he knows he has to get the ball out fast. 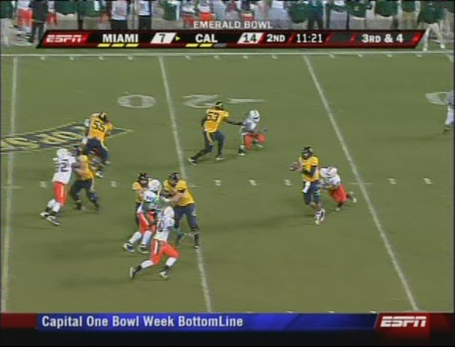 Longshore evades the Miami linebacker just long enough for a receiver to get open. 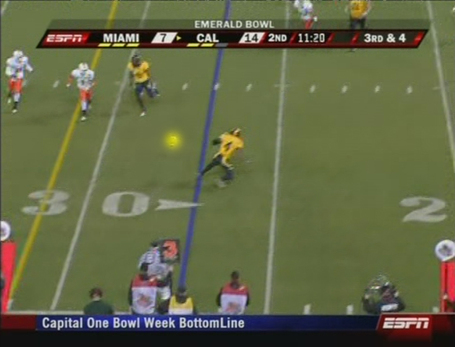 Unfortunately, because Longshore was in the process of being tackled, he is unable to accurately get the ball to Jahvid Best and the pass is an incompletion (ball is highlighted yellow).

Here is the Youtube video of the play.  (Special thanks to Ken Crawford from Excuse Me For My Voice, for volunteering to create youtube videos for the plays I am dissecting.)

The purpose of this post was to show Miami's defensive tendencies and how Cal would notify other players of the impending defensive movement.  When the defense uses one particular formation or special movement, the offense is instantly aware of such tendencies and knows to look for them again.  Although the Miami linebacker on this play tipped off his blitz by prematurely attempting to jump the snap, Cal right guard Malele, probably was aware that it was a very likely possibility that the linebacker would be blitzing anyways and would have been prepared for it.  Offensive linemen are always told to be aware of delayed blitzers - defenders who pretend to not blitz to lull a blocker into a false sense of security and to take attention away from themselves but then later blitz.

So the product of this play is an incompletion and a three and out by the offense.  While this play will go down in the history books as another error on the part of Longshore (for throwing the incompletion), it's really just one of those bad luck plays where your offensive playcall doesn't matchup well with what the defense called.  If the defensive playcall didn't call for a blitz, Longshore would probably have had more time to pass and might have completed a pass.  If the offensive playcall involved keeping the runningback in to pass block or on a read, then the Miami linebacker might have been picked up.