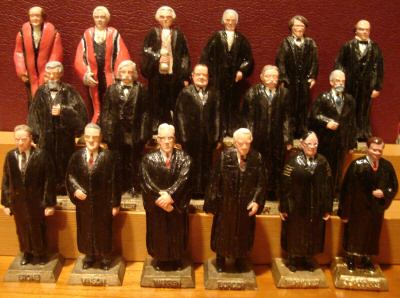 "Members of the CGB Supreme Court prepare to hear arguments" via i18.ebayimg.com

You've waited nervously in the hallway while the Justices deliberate. And, finally, they have it. The one. The only. The California Golden Blogs Supreme Court ruling.

But have you briefed yourself on all the issues? If not, read the Team Briefs first. Remember, the question is "What Team Is More Successful: 2004 or 2006?"

You heard from Team 2004 here. You heard from Team 2006 here. Now you get to hear from the Arbiters Of Truth, the Apostles Of Facts, the Justices Of Justicing, the California Golden Blogs Supreme Court. We have a majority opinion from Chief Justice HydroTech. We have a dissenting opinion authored by Self-Appointed Chief Justice CALumbus Bear. Find out more after the link.

1. In a matter of first impression, the California Golden Blogs Supreme Court has been asked to decide which football team is the greater team between the 2004 Cal Football team and the 2006 Cal Football team. This issue has been hotly debated from the mighty CGB North Circuit Court, to the very lowest laymen Cal fans on internet chatboards accessing the internet from their mother's basement. Despite the extreme controversy, the learned brethren before those of us on this heralded and current California Golden Blogs Supreme Court never took it upon themselves to decide this great controversy. We can only assume that the venerable brothers before us determined that the issue not be ripe. However, today, the highest court of this great blog has decided the issue to be fully ripe and ready for judgment.

3. But the underlying question to answer the specific issue before us is much more complex. The real underlying question presented to this court today is the difficult task of determining how a team's greatest is determined. Afterall, only until a team's greatest can be determined, or somehow measured, can two teams be accurately compared in order to evaluate their merits against each other.

5. Ironically, the Petitioner's spent the least amount of time arguing what this court finds most persuasive. Petitioner's argue that the teams' records should be the measuring stick of a team's greatness and it is this argument that with which we most agree.

7. Comparing the 2004 Cal Football team's win/loss record versus the 2006 Cal Football team's win/loss record, we see that the former had a 10-2 overall record. The latter had a 10-3 overall record. Converting these records to percentages we arrive at 83.3% for 2004, and 76.9% for 2006. This analysis would suggest that the 2004 team was clearly greater. However, if our analysis were to stop here, it would be flawed because the 2006 team played one more game than the 2004 team. Had the two teams played the same amount of games, this court would be satisfied with this analysis but since they did not, we are required to go deeper in our analyses.

8. Clearly, the next question that confronts us is how to compare two teams' greatness when they have similar and outstanding records, but played a different amount of games.

10. The 2004 Cal Football team has only one regular-season loss, and their loss is a very high quality loss. That loss came against USC, and Cal lost 23-17. The 2006 Cal Football team has three losses, and only has one moderate-quality loss. Their three losses were against Tennessee (lost badly 35-18), Arizona (lost narrowly 24-20), and against USC (lost 23-9). The best loss of the three is the loss to USC. In that game, Cal kept the game within a touchdown for about 50 minutes and then fell apart in the end. Despite the close loss to Arizona, the 2006 Cal squad had no business losing to such a mediocre Arizona team. Thus, despite the closer margin of loss to Arizona than USC, the quality of loss is higher for the USC game than it is for the Arizona game. In regards to the Tennessee game, Cal was essentially knocked out of the game midway through the 3rd quarter. This loss was one of the ugliest losses of Coach Jeff Tedford's career.

11. Taking into account the quality wins and quality losses, it appears that the 2004 Cal team has the edge. The 2004 Cal Football team had less quality wins however they had fewer bad losses (none to be precise). On the other hand, the 2006 Cal Football team, despite having more quality wins, had two pretty bad losses. Losses should always take higher consideration than wins because above everything else, despite the quality of the opponent, a team must at least win the game. A team cannot prop its merits up on the argument that they "almost beat X opponent," or "would have beat Y opponent if not for Z incident." If such inconsequential and speculative arguments were given worth, the doors of the flood gates would be wide open and every team in the nation could have a substantial argument for being a great team.

14. Finally, the Respondents suggest that the 2006 Cal Football team supplied Cal fans with more memories and more memorable games than the 2004 Cal team. Such may be the case for the Respondents, but in the words of the very wise The Dude: "Yeah, well, you know, that's just, like, your opinion, man." Memories are subjective to the person. What may be memorable to one person may not be memorable to the next person. As this Court has stated before, we are looking for objective standards to compare two teams by. Memories are a nice cherry on top of a win or season, but it is wins, quality wins, and quality losses that matter more for comparing two teams.

1. This Court has been asked to finally determine which of the 2004 or the 2006 Cal football team was "better" or "greater". The majority opinion delves into this issue, uses meritorious metrics, but then draws conclusions which have little basis in fact. Accordingly, this Self Appointed Chief Justice respectfully dissents.

2. The majority opinion correctly emphasizes the accomplishments of the team over individual performances: "[t]herefore, team accomplishments should be the ultimate deciding factor in determining who is better. There is no better way to determine a team’s greatness than by looking at their overall win/loss record." Maj. op., ¶ 6. Each team had 10 wins, and due to an unequal number of games, the 2006 team had one more loss. The majority opinion continues to be correct in noting that the unequal number of games should mitigate the slight disparity in overall win/loss record. However, the majority opinion’s logic is then intercepted by faulty conclusions when it goes on to state that the 2004 team was better.

3. The majority opinion’s logic train is similarly derailed when it analyzes "good" wins versus "good" and "bad" losses. The majority opinion has it both right and wrong in the following sentence: "[t]he 2004 Cal Football team had less [sic] quality wins however they had fewer bad losses (none to be precise)." Maj. op., ¶ 11 (emphasis added). Justice HydroTech is correct in that the 2004 team had fewer quality wins than the 2006 team. But to then mitigate the entire merit of the sentence by including a gross inaccuracy in saying the 2004 team had no bad losses is an affront to each and every Cal fan who was, and remains, emotionally injured by the debacle that was the 2004 Holiday Bowl. The majority opines that the 2006 season-opening loss to Tennessee was "one of the worst losses of the Jeff Tedford era", maj. op., ¶ 13, but the majority fails to note that Tennessee was playing at home and that loss was a distant second to the true worst loss of the Jeff Tedford era (prior to 2007), which was the 2004 Holiday Bowl trouncing by Texas Tech. That loss is still cited by the national media and Texas fans as justification for Cal’s Rose Bowl snub. By any measure, the shame of that loss is almost unbearable. Do Cal fans still feel shame about the 2006 Tennessee loss? I would surmise: not nearly as much.

4. For the majority opinion to call the 2004 Holiday Bowl debacle merely a "fairly bad loss", maj. op., ¶ 13, is an indictment against the majority opinion’s sanity. Is this court comprised of revisionist historians? If so, this dissent shall serve to set the record straight.

5. To truly determine which was the better team, one must look to the record, as the majority opinion correctly opines. So the question then becomes, which team accomplished more? Did the 2004 team that finished second in the Pac-10 and lost the Holiday Bowl truly accomplish more than the 2006 team that finished tied for first in the Pac-10 and won the Holiday Bowl? The question answers itself.

6. Is the better team the one that appears to be better on paper, or the one that proves itself better on the playing field? Is the better team the one that loses its Bowl Game or the one that wins that same Bowl Game? These questions also answers themselves. One team has a Pac-10 co-championship banner and a Holiday Bowl trophy, while the other team has neither and instead has only arguments that it "almost beat X opponent" and "would have beat Y opponent if not for Z incident." Maj. op., ¶ 11. The 2004 team almost won the Pac-10 and almost won the Holiday Bowl, but the 2006 team actually accomplished both.

7. Fans may claim that the 2004 team had better talent, but talent alone does not determine which was the better team. Also, one could argue the 2006 team did more with less talent, which is a better indicator of team versus individual merit. As the majority opinion correctly points out, the record is the deciding factor. However, the majority opinion is incorrect when it decides the 2004 record is better than the 2006 record. A championship banner and a Holiday Bowl trophy dispute that conclusion. The 2006 team beat its foe from Texas in the Holiday Bowl, the 2004 team most infamously did not.

8. This dissent concludes with an analogy. Between the 2004 and 2006 seasons, the US[u]C[k] Trojans lost the 2005 BCS Championship Game. Matt Leinart, that team’s quarterback, apparently still upset by having been outplayed by Cal during that quarterback’s entire career, in a fit of classlessness declared (in an on-field interview immediately after his team’s defeat) that his team was still "better" than the national champions. In essence, the majority opinion invokes that same conclusion. In spite of the teams’ respective performances, including in the same Bowl Game and in the same Pac-10, the team that lost its ultimate game and did not win any share of the Pac-10 championship is still viewed as "better." But any rational person would conclude: "no, the other team, the team that won, is better." It does not matter who should have been better, it only matters who was. And that team was the 2006 team. Accordingly, given the conclusion of the majority opinion, this Self Appointed Chief Justice has no choice but to declare the majority opinion Leinart.