In this sixth part of a twelve post analysis, we're going to look at how some bad footwork on the offensive line can lead to a botched play.  In case you missed the previous installments, here is Part I, Part II, Part III, Part IV, and Part V.

Again, special thanks to Ken Crawford from Excuse Me For My Voice, for volunteering to create youtube videos for the plays I am dissecting.

While working under Coach Michalczik, I quickly learned that footwork is very important.  I mean, I think we all know it's fairly important but the coaches stress it a lot.  Stuff like make sure you step with this foot first.  Don't perform false steps.  Of course there are many other important techniques to also perform flawlessly such as angles and keeping your head up at the target.

On the following play we'll see an example of how one player executing some bad footwork can lead to a botched play. 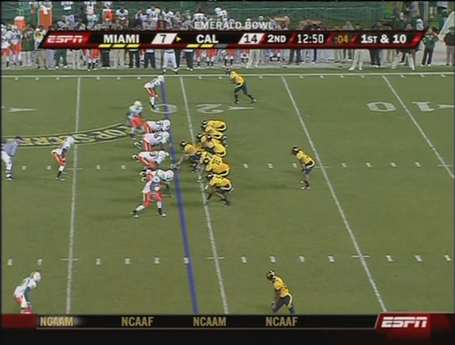 Cal is facing a 1st and 10.  Cal has 12 personnel on the field (2 WRs, 2 TEs, 1 RB).  This is NOT to be confused with 12 players on the field.  Cal appears to be in its Ace formation but if you look closer they're not.  Instead, Cal's runningback is not behind the quarterback but behind the left tackle.  For those of you who follow the Cal offense closely then you should know what the play will be.  Let's say it altogether since we all know what this play is going to be: end-around.  And there's a small chance this could be a reverse since that is the natural progression after an end-around. 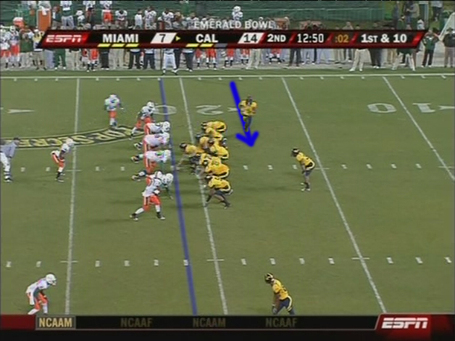 Cal moves wide receiver, Ross, into motion towards the quarterback.  This movement pretty much guarantees that Cal will run an end-around since Cal usually passes the ball when the runningback is not lined up behind the quarterback and these passing plays don't usually involve pre-snap motion. 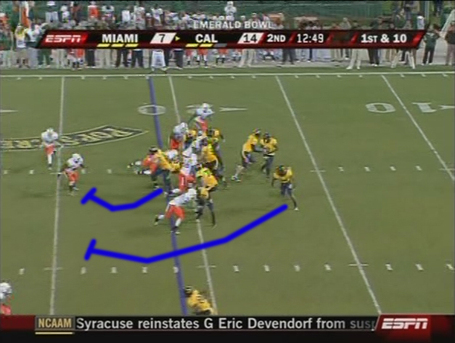 Here's the post-snap picture.  Every blocker along the offensive line has a defender to block.  The Cal left guard is assigned to blcok Miami's linebacker (shown with the short blue blocking line).  The runningback, Vereen, is assigned to lead block for the ball carrier, Ross, and will focus on the backside Miami defender (he's the player on the 25.5 yard line over by the "pop secret" paint). 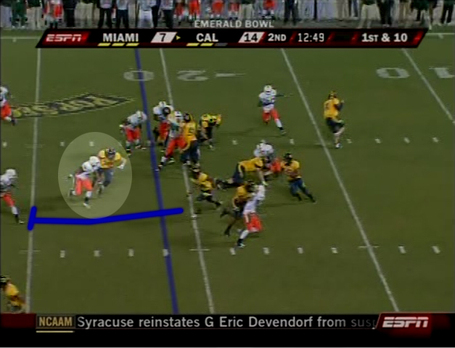 Unfortunately, Cal's left guard cannot get to his defender in time and ends up behind his defender.  Cal runningback, Vereen, will continue to block his assignment. 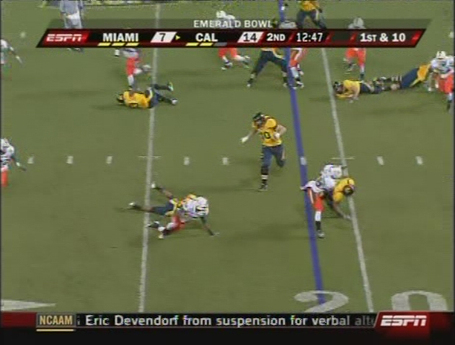 The play results in a loss as the defender assigned to the left guard tackles Ross the ball carrier. 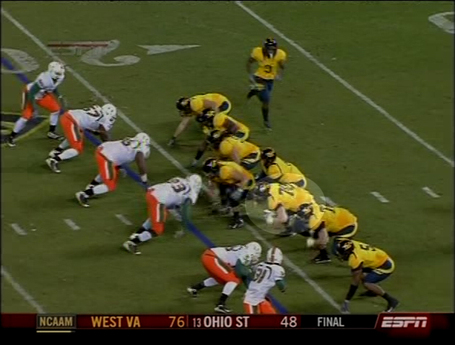 What specifically went wrong on this play?  Let's look.  Here's another angle of the play.  I've put a circle around Cal's left guard so we can keep an eye on him and see what went wrong here. 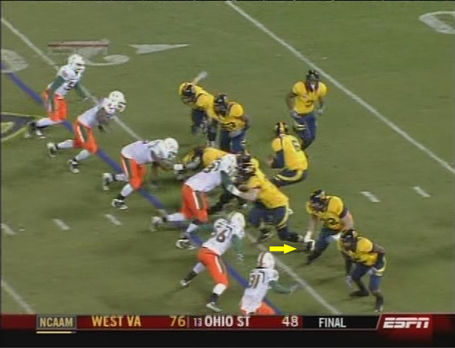 As we all know, this is an end around to the offense's left.  The Cal players along the offensive line should push off with their right foot and begin moving left.  However, Cal's left guard fails to do this.  I know it's near impossible to see this on a screen-shot instead of video, but instead of pushing off with his right foot, he picks up his right foot and shuffles his feet for only a split second, and then steps with his left foot.  At the precise moment of this screen grab the left guard has just picked up his right foot to shuffle instead of pushing off with that foot. 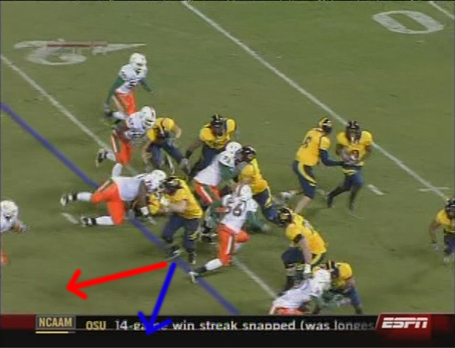 The act of shuffling his feet and not pushing off with his right foot has made the guard slow to get off the line, but also has made the guard take a bad angle.  If the guard had pushed off with his right foot and stepped with his left, he would have taken a more diagonal angle of attack (blue arrow).  Instead the guard has taken a very aggressive and direct angle of attack (red arrow).  Such an aggressive angle is undesirable because it doesn't properly take into account that the defender will be moving laterally towards the ball carrier.  In short, the poor footwork has resulted in the player being late off the line and also out of position. 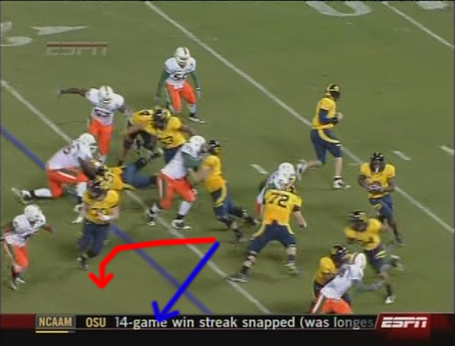 In the above photo you can really see the effect of the poor footwork.  If the guard had used better footwork and taken a proper angle then he'd be in great position to make a block.  Instead, the guard is behind the defender and had to adjust his route to match the defender (hence why the red arrow is curved) instead of cutting off the defender.  As we all know, the shortest distance between two points is a straight line and not a curved one.  In a football game, plays go by in seconds so even a mere .25 second lag can be enough to sabotage a play. 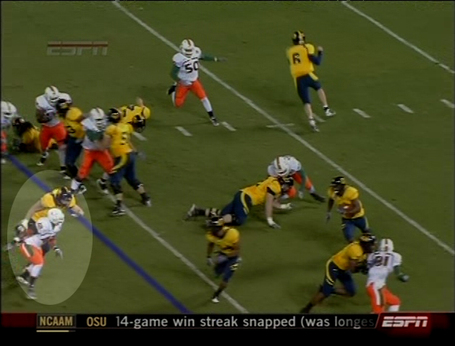 Here you can see defender is in prime position to stop this play and the guard is behind the defender.  On this play, Vereen, the lead blocker, could have come off his assignment and blocked the left guard's assignment.  Hindsight is 20/20 and he probably should have.  However, if he did there is still no guarantee that the ball carrier, Ross, would have gained more yardage considering that Vereen's assignment (who is not visible on the screen but is just off to the left of the picture above) would have been unblocked and could have made the tackle on Ross too.

Here is the youtube video of the play.  In the left guard's defense, it appears as if the Miami playside defensive end would have been in the left guard's path of travel even if the left guard had pushed off with his right foot and taken a better angle.  In other words, had the left guard used proper footwork, he still might not have been able to make the play to no fault of his own.  On this play, Miami's defense end #56 has attacked the ball through the B-gap (the space between the guard and tackle) instead of through the C-gap (the space between the tackle and tight end).  The defense end was lined up in a 5-technique (outside shoulder of the tackle).  Based on his 5-technique alignment he would usually attack the C-gap, but instead he flowed against the play and attacked the B-gap (to the defense end's left) which is unusual considering the flow of the play was to the defense end's right.

Could the Cal left guard have known that the Miami playside defensive end was going to attack the B-gap instead?  Perhaps.  I suppose he's the only one that knows.  However, it is apparent from the pre-snap picture that the Miami playside defense end (#56) is going to be moving laterally and not upfield as much.  In the sixth picture of this post, the defense end (who is directly above the word "Ohio" on the bottom ticker), has placed his feet wider apart rather than one foot in front of the other.  Contrast #56's stance with the rest of the defense line.  The other defensive lineman have one foot further back than the other foot clearly signaling their impending movement up-field rather than side-to-side.  Perhaps Cal's left guard saw this and altered his footwork and path of travel in anticipation.  Perhaps he didn't notice this and just erred.

As we've seen here, bad footwork along the offensive line can lead to that player being slow off the line, that player taking a bad angle, and missing their block.  It really only takes one person to mess up a play.  This will probably end up being the theme to this entire series but it simple comes down to EXECUTION.  Do your job.  Complete your assignments.  If every player can do that then the offense has done its job then the burden is on the defense to out-play the offense's perfect execution and probability of a successful play goes up a lot.

On this play, it appears as if the Cal left guard failed to execute properly.  Cal shot itself in the foot again.  The Miami defender didn't really "beat" his blocker (the Cal left guard) since contact was never made.  In other words, Miami didn't win the battle within this play so much as Cal gave up the battle.  Opponents hate hearing it when the offense says the stuff I just said in the previous sentence because it takes credit away from the defense by saying the offense did themselves in.  However, it's the truth.  Miami's linebacker wasn't fighting his way through 3 blocks, let alone one block to get to the ball carrier.  He merely took a good angle and made a tackle.  He can get credit for that, but other than that, Cal gave Miami a freebie due to more poor execution.