Hall of Fame Round of 64: Pete Newell Bracket, Part IV

Share All sharing options for: Hall of Fame Round of 64: Pete Newell Bracket, Part IV 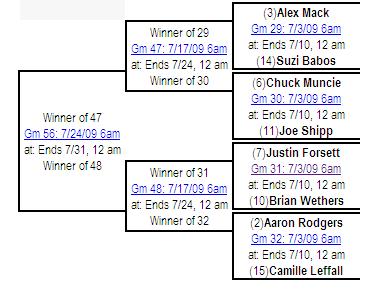 We conclude the bottom half of the Pete Newell bracket! Top two matchups were posted this morning, and we move onto the bottom two. Polls for these matchups close next Friday at midnight. The athlete matchups are above, the athlete descriptions and polls are after the jump. Please read, vote, and debate in the comments!

This is our final bracket of the first round! Get ready for second round action next week! 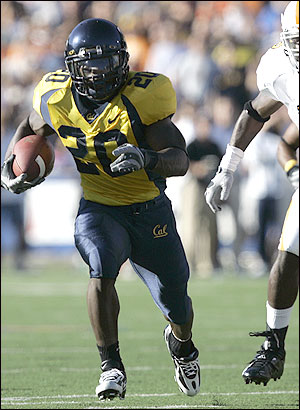 With a deep depth chart at running back, it appeared Forsett would redshirt his freshman year, but an impressive performance in fall camp kept Forsett on the active roster. In the season opener, Forsett had 34 yards rushing and a touchdown in Cal's victory over Air Force. Forsett played mostly as a backup during his first 3 years at California, playing behind J.J. Arrington and Marshawn Lynch. Nevertheless, he managed to amass a good amount of playing time. During his freshman year, Forsett was used primarily on special teams, retuning one kickoff for 11 yards but usually blocking for Marshawn Lynch. On coverage units, he made 3 tackles and blocked a punt in the endzone for a touchdown against Washington.[3]

During his sophomore year, Forsett became second on the Cal depth chart at running back. He filled in when Lynch was injured in the early-season and ran for 235 yards against New Mexico State, good for the fourth highest single game rushing effort in school history.[2] In Forsett's junior year, he continued his role as backup. He ran for over 100-yards against Oregon when injuries sidelined Lynch and in Cal's rout of Texas A&M in the Holiday Bowl.[2]

As a starter his senior year, Forsett rushed for 1,546 yards on 305 carries, and scored 15 touchdowns. He opened the season with 156 yards rushing and a touchdown against University of Tennessee. His 15 touchdowns led all rushers in the Pac-10, and his 1,546 rushing yards finished second, behind only Oregon tailback Jonathan Stewart. Forsett's efforts earned him a selection to the All-Pacific-10 Conference first team.[5] Forsett ended his college career on a high note, rushing for 140 yards and 2 touchdowns in a 42-36 Cal victory over Air Force in the 2007 Armed Forces Bowl. 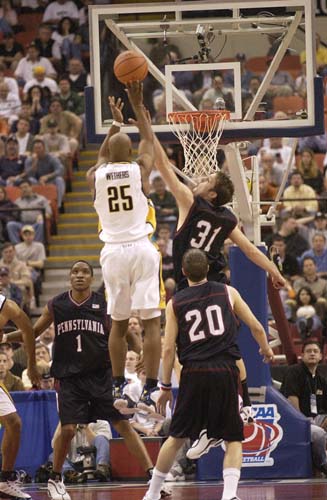 Twist: For this tiny Jewish man, Brian Wethers was always a medical marvel.  He looked like he could just smash somebody into pieces with those arms of his.  We were obsessed with his ability to potentially play Whack A Mole solely with his fists!  We were just happy he was a happy-looking nice guy and not The Angriest Man Alive (i.e. AJ Diggs!).

Brian Wethers (born December 17, 1980 in Carson, California, U.S.) is an American professional basketball player. Wethers attended college at the University of California in Berkeley after graduating from Murrieta Valley High School in 1999. Wethers primarily plays the small forward or shooting guard position. After college he had NBA pre-draft workouts with the Golden State Warriors and Los Angeles Lakers but was never drafted. Wethers then played for Shandong in China in the 2003-2004 season before moving to the Hunter Pirates in the Australian National Basketball League for the 2004-2005 NBL season. Wethers was a standout for the Pirates, leading the league in scoring with 24.1 points a game and being named the MVP of the Australian league. Wether's strong play took the Pirates to the playoffs, after they had previously only won 2 matches the season before. His signing was a major acquisition for the New Zealand Breakers, who have struggled in the league since their inception in 2003-2004. Moved to Ukraine in 2008, signing with Budivelnik (Budivelnyk) Kyiv. 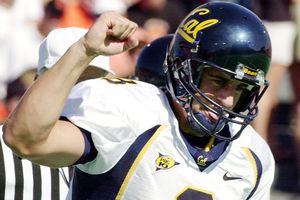 Because I am also a San Francisco 49er fan, I tuned into the 2005 NFL draft very much hoping that Aaron Rodgers would complete his destiny as a childhood Joe Montana fan and don the Red and Gold as our franchise quarterback.  Four years later and I’m still not sure if I wished that had happened.

Rodgers only had about a season and a half to make an impression as a starter for the Golden Bears, and he wasted very little time.  Taking over as starting QB midway through the ’03 season, Rodgers led a late season charge for a bowl berth in a year that was expected to be a rebuilding year.  He then had perhaps the best performance ever by a Cal QB in a bowl game, sending expectations for 2004 sky-high in a thrilling, crazy 52-49 victory over Virginia Tech in the Insight Bowl.  He threw for 394 yards and 2 TDs.

His 2005 season can almost be described as disappointing, although none of the fault would fall to Rodgers.  How can a 10-2 season be disappointing?  How about when hard-luck injuries gradually hamper the passing game as the team slowly puts the offensive burden on the legs of JJ Arrington?  Or when those receiver injuries haunt Cal by essentially preventing any chance at a comeback in a painful loss to Texas Tech in the Holiday Bowl?  And most of all, how about when your QB puts together one of the most impressive single game efforts in a losing effort to the eventual national champs?  Never have I been surer of something football related in my life than when Cal had first and goal at the USC 9 with less than two minutes to go.  Cal was going to score.  Aaron Rodgers was 29-31.  There is no way we don’t take the lead.  I just sat numb in my chair when Jonathan Makonnen slipped on 4th down, not comprehending that I was wrong.

Sadly, the peak of Rodger’s passing attack at Cal was probably reached in Corvallis in the game just before Cal’s loss to USC.  In that game Rodgers, Chase Lyman, and Geoff MacArthur absolutely blitzed Oregon State in a 49-7 victory.    Next week Lyman would go down with a knee injury that would essentially end is football career.  Makonnen would miss most of the games that year with a variety of nagging ailments and MacArthur played through various problems that limited his abilities before going down with a freak injury in practice before the Holiday Bowl.  It’s a testament to Rodger’s talent and Tedford’s coaching that Cal’s passing attack didn’t completely disappear.

Rodgers intelligently declared for the draft in a down year for quarterbacks.  In one of the most unbelievable displays of NFL draft skullduggery he somehow slid to the end of the first round to the Green Bay Packers.  Rodgers suffered through Brett Favre’s chronic indecisiveness and is now the unquestioned starter for a perennial playoff contender.  Meanwhile, Alex Smith is for some reason still considered a viable starting quarterback contender for the 49ers.  I said above that I don’t know if I’m still upset that the 49ers drafted Smith over Rodgers.  That’s because I wouldn’t wish the 49er’s dysfunction on a Cal quarterback as clearly talented as Rodgers is, even if that means he has to play for a team that knocked out my 49ers every damned year in the late 90s.  When everything is done many expect Rodgers to finish his NFL career as the most decorated quarterback ever to come out of Cal.  I’ll remember him as the player that vaulted Cal from feel-good mid-conference team to perennial Pac-10 title contender. 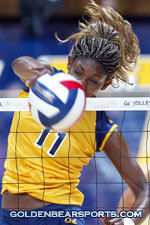 Here are some thoughts on Camille.

ososdeoro--Okay, she was just one of the better players on a really good team, but she had Hall of Fame hair.

BearStage: Interesting tidbit – she was the one Mike Tepper kept from being run over:

Mike Tepper and a friend, Cal senior volleyball player Camille Leffall, were crossing Telegraph at Dwight Way about 1:15 a.m. when a Chrysler pulled alongside them.

And we all know what happened next.

Now apparently an aspiring singer. Not to mention gorgeous.

Leffall, a 6-1 middle hitter from Upland, Calif., is having an outstanding senior campaign, hitting .394 (fourth in the Pac-10) and leads the team with 107 blocks. Leffall shined in the Bears' Oct. 31 win over Stanford, recording a career-high 21 kills with a .425 hitting percentage. From Sept. 28-Nov. 5, she hit .300 or better in 11-straight matches, and has hit .300 or better in 20 of 27 matches overall. Leffall is currently second on the Cal all-time block list with 427 total blocks - seven blocks shy of Cara Dane's school-record 434 blocks from 1990-93. She is also the Bears' school record-holder with a .365 career hitting percentage and has the second-most career blocks of any active Pac-10 player. Leffall was a member of the Pac-10 All-Freshman Team in 2001 and was honorable mention All-Pac-10 in 2003.

Here's the full story on the Tepper-Camille incident.

Tepper and a friend, Cal senior volleyball player Camille Leffall, were crossing Telegraph at Dwight Way about 1:15 a.m. when a Chrysler pulled alongside them.

"The driver said, 'Hey, babe, what are you doing?' to Camille," said Tepper, who is 6-foot-6, 330 pounds. "She said she wasn't interested. We kept walking, but we only got about five feet when the car pulled up alongside us into the crosswalk. They kept hitting on her so I stepped in front and said, 'Hey, we're going to meet some friends. Can we just get by?' "

According to Tepper and police reports, as Tepper and Leffall tried to cross behind the car, the vehicle shifted into reverse and headed toward them. "I saw the driver had his hand on the steering column and I thought that this guy was going to punch it," Tepper said. "So I hit Camille across the chest and threw her."

Although Tepper managed to toss Leffall out of the direct path of the car, the front, passenger side of the vehicle blasted into them both. The severity of the impact was lessened for Leffall because Tepper already had sent her sprawling backward.

"We both got hit, but Mike got run over," said Leffall, who suffered cuts and scrapes and an injured back. "It's a good thing he pushed me out of the way, because my body couldn't have handled (being run over). I probably would have had my foot amputated.

"It was really nice of him. He was trying to protect me."

Tepper wasn't so fortunate. "The car hit me, and I hit the ground, and the tire ran over my leg," Tepper said. "I looked back to my right, and the guy puts it in drive and runs over me again."

Again, Tepper's right leg was crushed under the tire before the vehicle drove off.

Leffall still is suffering from back pain and emotional trauma. "I have to walk past that intersection to go to school, and it is really, really tough," she said. "I don't think they found all the guys who were in the car, so I am constantly watching my back. This has overwhelmed me ... the emotions you have. We are getting hit by cars driven by crazed maniacs. It takes away your sense of security."