In this fifth part of a twelve post analysis, we're going to look at how Cal baits the defense by running plays which look similar but in fact are different.  In case you missed the previous installments, here is Part I, Part II, Part III, and Part IV.

Also, I would like to give a very special thanks to Ken Crawford from Excuse Me For My Voice, for volunteering to create youtube videos for the plays I am dissecting.  Many people have suggested that I use videos but I do not have the software on my computer to splice up the video.  Please give Ken some thanks as since he's a very busy family man who also has many other social responsibilities but made the time to make the videos.  Be sure to also stop by his blog: Excuse Me For My Voice.

First we'll look at the set-up play.  Here is the pre-snap picture below: 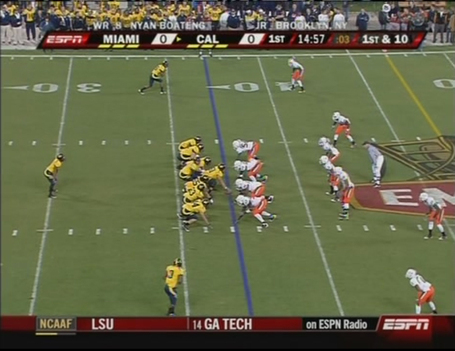 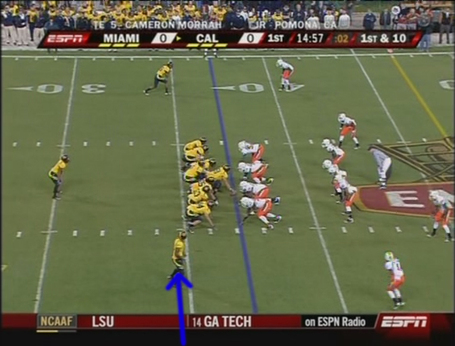 Cal moves the right wide receiver, Ross, in motion towards the offensive line. 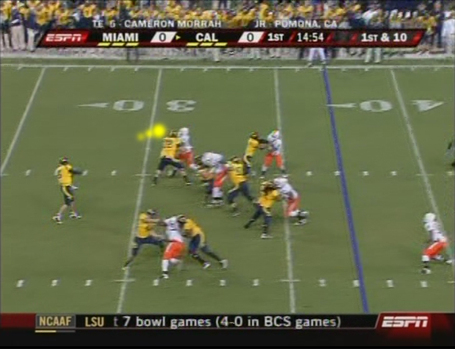 After the snap the quarterback, Longshore, fakes the handoff (playaction), and then passes the ball (yellow trail).

Here is the youtube video of the play.  This is the set-up play.  Now let's go over the second play which is designed to take advantage of the defense who is expecting a similar play.

Below is the pre-snap look of the second play. 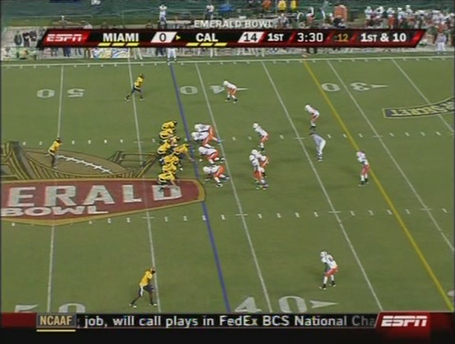 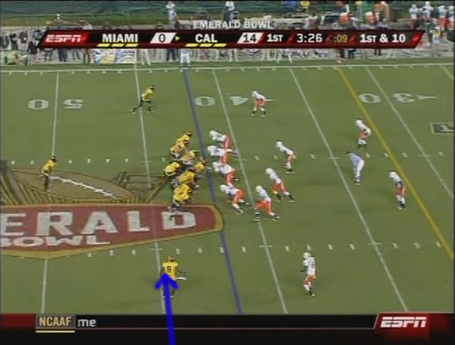 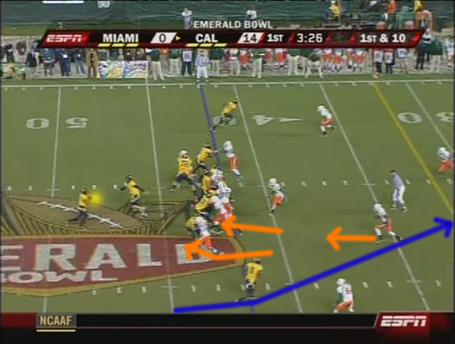 Thus far, everything has been the same.  But now things change.  Cal's quarterback, Longshore, pitches the ball to the runningback Jahvid Best.  This gives the illusion of the play being a run play.  Two of Miami's linebackers have blitzed (the two left orange arrows).  I think these linebackers were blitzing rather than responding to the play-fake because they were already stepping towards the line of scrimmage before the snap.

Most importantly, Miami's strong safety has bit on the pitch, has stepped towards the box, and is focused on the backfield (the right-most orange arrow).  Cal wide receiver, Boateng, is in prime position to run his deep route right behind the Miami strong safety (blue arrow). 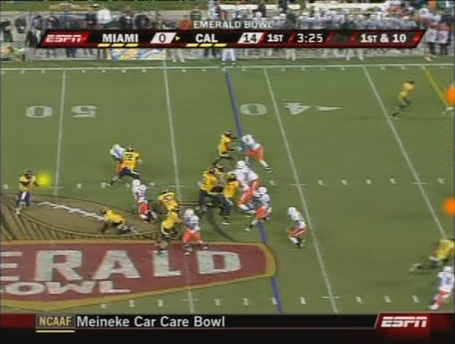 Cal then executes the flea flicker by having the runningback, Best, pitch the ball back to the quarterback, Longshore.  Unfortunately, because Miami's defense appeared to be blitzing two of its linebackers, the defense has penetrated the offensive line and is forcing Longshore out of the pocket.  If the pass protection had been better, Longshore might have had a chance to throw the ball.  Unfortunately, it appears as if the Miami free safety (the lower right orange dot on the far right of the picture above), did not fall for the fake and is backpedaling into deep coverage.  Furthermore, Miami's cornerback (defender in the bottom right corner) who is covering Boateng did not fall for the play fake either and is contining his man-coverage on Boateng.  Longshore, and the offense as a whole, really doesn't have a chance at successful completing the pass due to the quick penetration from the blitzers, and because the Miami free safety and cornerback were not faked by the toss to Best. 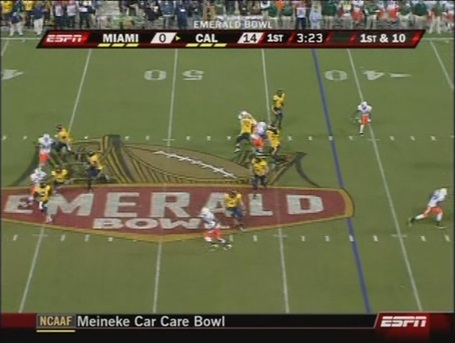 Longshore scrambles out of the pocket and throws the ball away.

Here is the youtube video of the second play.

If you think about it, Cal merely jumped to "the add-on."  Instead of going #1-run play; #2-playaction play; #3-flea flicker, Cal just started at #2.  The effect is still the same.  When the defense sees Cal run a playaction play, the defense knows the offense will probably run the ball out of the same formation.  The defense can make this assumption because this assumption is the whole premise behind playaction.  Playaction is designed to look like a run play, but is really a pass.  So if an offense play actions although never before running the ball, the defense can still assume a run will be called up some time in the future.

Also note that the ball location between the hashes are similar.  This aspect of football is widely ignored by most football fans but the location of the ball within the hashes has a huge effect on what plays are called and what direction the plays are run.

Although I didn't give you this information, do you know how long after the offense set-up the defense with the initial play that the offense ran the flea flicker?  Only 13 offensive plays later.  In fact, the initial play that the offense ran was the very first play of the game.  So in other words, Cal was already aiming to set up the defense from the very start.  And why is 13 plays later relevant?  Well, any sooner and the defense might suspect that the second play is some sort of deception or trick.  Any later, and the defense might not really remember that first play and thus won't bite on the bait.  Oh, and Cal didn't use its 12 personnel in Ace formation between these two plays to possibly confuse the defense, thus helping increase the chances that the defense remembered the first play.

While this play wasn't successful, it wasn't necessarily because of bad playcalling but because the Miami free safety was disciplined enough to not bite on the fake run.  Sometimes the deception works, sometimes it doesn't.  You win some and you lose some.  C'est la vie.