Share All sharing options for: What Excites You The Most About Cal Football? (2009 ed.)

Yeah, enough of that. Let's move toward the brighter side of life. Let's figure out what we'll all be looking forward to the most in 2009. I'll talk about three particular units that have me excited this season, and the first one has something to do with some mystical trophy that everyone obsesses over for whatever reason. 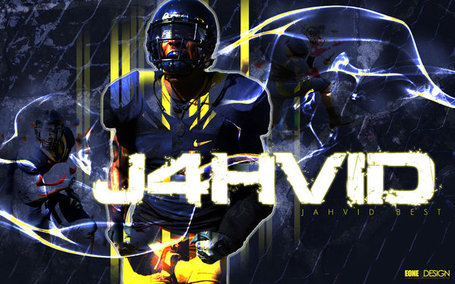 (Click here for the image wallpaper of Jahvid Best above!)

Running backs: I'm pretty sure that this has been at the top of every Cal fans's list since 2004. Going into every season since 2004, the run game behind Ron Gould has blossomed into one of the most effiicent in college football. They have placed near or at the top of the Pac-10 every season, often surpassing USC in terms of pure production. Take a look at two of the most common metrics of success in the run game.

It appears with Best entering his junior campaign, the Cal run game is back on the upswing after two good but not great running campaigns. Assuming he gets at least adequate backup from Shane Vereen or Covaughn Deboskie, he should . Anything more would set the Bears offense right on track for 2009, hopefully opening up the passing attack to exploit Pac-10 defenses looking to box in Cal's power run game.

Defensive Line: During the first year of the 3-4 (click for danzig's brief rundown of it), there were indeed significant improvements from 2007 to 2008. Four particular improvements stand out that highlight how important our D-line has been to our rebirth as a defensive stalwart in the Pac-10. First numbers are from 2007, second numbers from 2008.

Rulon Davis is gone, but filling in his shoes should be the very capable Cameron Jordan, who showed very promising signs going into next season that he is ready to step into Davis's giant shoes. Rounding out the line with the capable senior Alualu and the developing Derrick Hill at nose tackle, this should be a very strong unit in 2009, and should make up for the losses of the linebackers with additional experience running the 3-4 set.

Secondary: My favorite position. The Bears pass D allowed only 5.8 yards per attempt (10th in the country), completed 51.6% of their passes (4th in the country), and picked off 24 passes (3rd in the country). And guess what? Those stats could possibly be better (or at least the same) this year. EVERYONE is back.

Syd'Quan Thompson and Darian Hagan combined for 36 individual pass in 2009, tying them with Verner/Norris of UCLA as one of the best lockdown corner units in the country. Brett Johnson and Marcus Ezeff aren't quite on their level, but they can certainly tackle well enough. Add in capable reserves in Sean Cattouse, Chris Conte, and Bryant Nnabuife, and it's hard to see Cal's secondary not being second to none in the Pac-10.

What makes you optimistic about 2009 Cal football? Voice your thoughts in the comments!