Well, it was a frustrating season for the Cal Baseball team.  After making the NCAAs last year, there was hope of a repeat.  Unfortunately, it was not the case.  But the season is over and now the focus has turned to the draft.  It starts today at 3 PM PST and continues over the next 3 days.  Although the team was not very successful this year, there is hope for many Cal stars in the Big Show.

You can follow all the action here at the MLB.com Draft Central.  And you can follow it in a more "urban, edgy, modern, but non-monetized" way by checking out the official MLB Draft Twitter.

One thing to note about the MLB draft:  like the NFL draft, college juniors are eligible to be drafted, but unlike with the NFL draft, they don't forfeit their college eligibility by being drafted.  Thus, if one of the players discussed below (all of them Juniors) doesn't like how much money they're offered, or what they team drafting them wants to do with them, they always have the option of not signing and returning to school for their senior season.  For players taken in the first five rounds or so, this is unlikely (unless they have unreasonable monetary demands), but for players taken in later rounds, they won't be offered much money, nor will have a great shot at making the majors, so finishing their college degree becomes a more attractive option.

After the fold learn more about some of the Cal stars ready to make the leap. 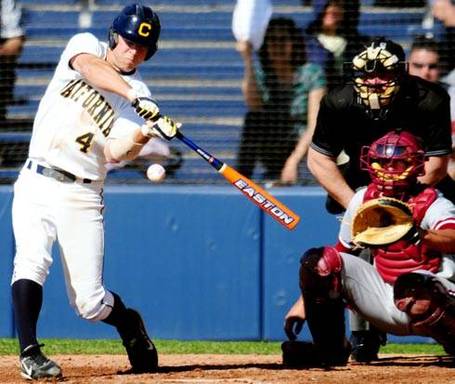 Mock drafts over at Minor League Ball all have Jackson going somewhere in the supplemental first round (basically, extra picks between the first and second rounds that teams receive as compensation for losing high-value free agents), which if it holds, would be a pretty good place to go, and would set him up to have a good shot at the majors in 3 years or so.  Unfortunately, I was only able to make it out to one Cal game this year, and Jackson didn't make much of an impression on me in that game, so I'll leave you with a couple thoughts from John Sickels:

Brett Jackson, OF, California
Jackson is another tools guy with a spotty performance record, though he's certainly improved this year, hitting .331/.401/.586, which isn't terrific but isn't bad. His biggest problem is plate discipline, as shown by a 16/44 BB/K ratio in 157 at-bats. Like Davis, Jackson has first-round physical talent but is still learning how to get the most use out of his tools. He could go anywhere in the second half of the first round or in the supplemental round.

**Players Who Should Go Early That Scare Me, and Not In A Good Way: Brett Jackson (too many strikeouts). 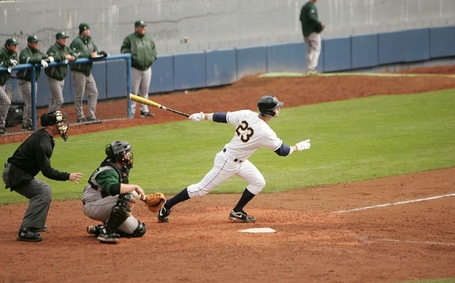 Having seen Kobernus play, I'd say this scouting report is pretty spot-on.  He's an excellent defensive second-baseman, which is good, because I'm not sure his bat would carry in The Show anywhere else on the field.  He's a good college hitter, mind you (he hit .341 this year, including 14 doubles, 3 triples, and 8 homers), but those numbers will drop off as he faces better and better professional pitching.  Mock drafts on Minor League Ball all have Kobernus being taken somewhere in the second round, which still makes Jeff a legit prospect to make the big leagues. 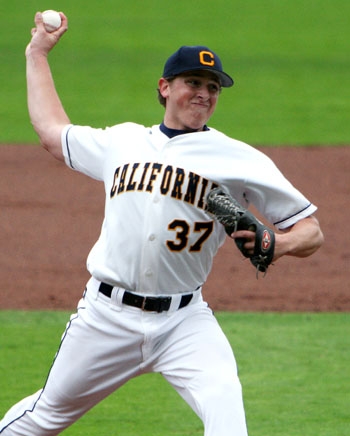 Earned All-Pac-10 honors as a junior...selected to the Wallace Award Watch List as a potential national player of the year candidate and was a Louisville Slugger second-team preseason All-American utility player in both Baseball America and Collegiate Baseball...was instrumental in the USA Baseball National (Collegiate) Team capturing the gold medal at the IV FISU World Collegiate Baseball Championship in the Czech Republic this past summer...helped Team USA to an undefeated 24-0 record and was the team's leading hitter with a .327 average (18-for-55) with five doubles, a triple, three home runs and 13 RBI in 20 games...was also one of the national team's top relievers, sporting a 1-0 record with a 0.00 ERA and two saves, striking out 11 batters with only three hits and three walks in 9.0 innings...hit a home run versus a Cuban squad that competed in the Beijing Olympics...was named Team USA's seventh best prospect in Baseball America...a multi-talented player who is a key contributor for the Bears, either at the plate, in the field or on the mound...has an outstanding arm, throwing in the low 90s with a fastball and a curve, and is a talented left-handed hitter...

A legit two-way player, I still haven't been able to find out if MLB teams are looking at Blake as an outfielder or as a pitcher; it may depend on which team ultimately selects him.  John Sickels likes his name and his bat:

Blake Smith has a great baseball name and two-way ability. He is much more polished as an outfielder than as a pitcher.

If he is indeed taken in the second or third round, as the mock drafts I've been able to find suggest, he'll probably get offered enough money to entice him to forego his senior season at Cal.

Finally, I want to briefly mention a couple of other players that are listed on MLB's draft tracker, though I don't know if either will end up being drafted.  Once teams get past the first 8-10 rounds or so, they may decide to concentrate on college seniors and high school kids unlikely to go to college, as whatever money they may offer these kids would be unlikely enough to sign most college juniors anyhow. 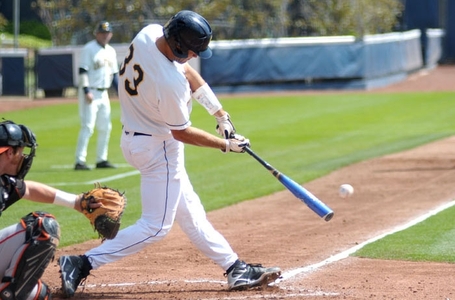 Established himself as the Bears' regular catcher early last season and ended up being a key component in Cal's NCAA regional run...improved defensively through the year and showed the ability to hit for both power and average...had impressive power numbers at California High School in San Ramon...was also a standout tight end and defensive lineman in football.

Honestly, Dylan's inclusion on this list surprised me a bit.  He's not a bad player, with decent power, but he's going to have to develop into one heck of a defensive catcher if he wants to make the majors some day.

A sophomore right-hander who was a 15th round draft pick of the Chicago White Sox out of high school...had to sit out 2007 after originally signing a letter of intent with UNLV and did not compete for Cal last season...is in contention to be one of the Bears' top middle relievers...throws in the high 80s to low 90s with a curveball, slider and change-up.

Teams must still see the potential that caused the White Sox to select Clor in the 15th round in 2006, because I'm not sure what they would want with a college pitcher who had an ERA of 7.71.  I haven't seen him play, though, so couldn't really judge him; maybe he just wants (lot of) polish.