CGB Hall of Fame Brackets And First Round Matchups

Share All sharing options for: CGB Hall of Fame Brackets And First Round Matchups

Here are the bracket announcements. Top half first, bottom half after the jump. Discuss in the comments whether we screwed it up like Meme Madness, bracketology picks, whatever.

Also, if anyone wants to write anything about these guys I can include in the matchup previews (anecdotes, stats, tall tales about the athletes, etc.), put them in the comments and I'll include them.

Oh yes, people, you might notice Mark Bingham is not in the poll. That's because he's automatically in! Our first CGB Hall of Fame inductee! (For more on Bingham, check out his story here).

Note: Sorry Ken, you got in Vinnie Strang just a little too late (plus for whatever reason Twist hates his guts and vetoed him out)! 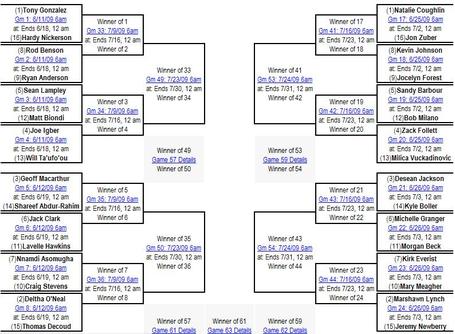 #1 Tony Gonzalez vs #16 Hardy Nickerson: One of the greatest football players in Cal & NFL history, versus one of the fiercest defenders in California history.

#8 Rod Benson vs #9 Ryan Anderson: Perhaps the best athlete blogger of his time versus a low post monster in his last year.

#5 Sean Lampley vs #12 Matt Biondi: Pac-10 POTY at hoops and led the Bears to a NIT title. The other one just replicated Mark Spitz in winning seven medals at Seoul--five golds, four world records.

#4 Joe Igber vs #13 Will Ta'ufo'ou: The first is an incredible student athlete with kick-ass photos on Life. The second liked knocking people to the ground.

#3 Geoff Macarthur vs #14 Shareef Abdur-Rahim: The primary weapon of Aaron Rodgers versus an NBA journeyman.

#6 Jack Clark vs #11 Lavelle Hawkins: A rugby legend versus a loveable receiver.

#2 Deltha O'Neal vs #15 Thomas Decoud: The favorite is a legend to Cal fans everywhere. The underdog blasted Korey Bosworth to other dimensions.

#1 Natalie Coughlin vs #16 Jon Zuber: One of the most decorated Olympians ever versus a well-loved baseball player.

#8 Kevin Johnson vs #9 Jocelyn Forest: A softball player with an amazing story versus a guy who posterized Hakeem The Dream and became mayor of Sac-town.

#5 Sandy Barbour vs #12 Bob Milano: Our current AD versus our greatest baseball coach.

#4 Zack Follett vs #13 Milica Vuckadinovic: Pain Train needs no introduction. Milica was a pioneer, the best women's hoopster until Ashley Walker came along.

#3 Desean Jackson vs #14 Kyle Boller: Perhaps the greatest receiver in California history versus a QB who got it together under Tedford's watch.

#6 Michelle Granger vs #11 Morgan Beck: The most good-looking of the first round matchups. A softball giant versus an offensive volleyball talent.

#7 Kirk Everist vs #10 Mary Meagher: Water battle! He was and is a water polo king as player and coach (national championships in both). She won gold medals at Los Angeles and set swimming records that lasted nearly two decades.

#2 Marshawn Lynch vs #15 Jeremy Newberry: The underdog is the original version of Alex Mack. I hear Twist really likes the favorite.

Onto the bottom half of the bracket! 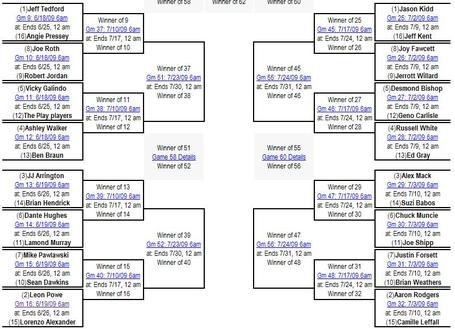 #1 Jeff Tedford vs #16 Angie Pressey. Our head coach extraordinare goes up against one of our most competitive women's volleyball talents.

#5 Vicky Galindo vs #12 The Play Players. I've fallen in love with our 5 seed. I don't know what to do about it. I've even forgotten what happened at the 1982 Big Game. Someone remind me?

#4 Ashley Walker vs #13 Ben Braun. The greatest women's bball player in Cal history, I'd say. The other guy was here a long time.

#3 JJ Arrington vs #14 Brian Hendrick. Arrington perhaps had the best running season in California history, perhaps Pac-10 history, perhaps college football history (I don't know, you could probably find others, but go back and look at that season again). Other was a solid bball player who came just before the rise of Kidd, so he's sort of fallen through the cracks.

#6 Dante Hughes vs #11 Lamond Murray. One was a great great ballhawk, our finest corner since Deltha. The other was a pure pure scorer who finished off much of Jason Kidd's handiwork.

#7 Mike Pawlawski vs #10 Sean Dawkins. You know how football announcers annoy you with intangibles talk and "how he does all the little things to win"? That's what Mike was about. Dawkins made tough tough catches during our time at Cal.

#2 Leon Powe vs #15 Lorenzo Alexander. Welcome to the Show. For those who've forgotten Alexander, he was one of the main forces that drove the early Tedford defenses of 2002 & 2003.

#1 Jason Kidd vs #16 Jeff Kent. Both of these athletes have had long, great careers in the pro leagues. Surprising this is a first round matchup, even more suprising it's 1 vs 16.

#5 Desmond Bishop vs #12 Geno Carlisle. Bishop was the anchor of those 2006 defenses. Carlisle bragged that the only person better than him in Chicago was MJ.

#4 Russell White vs #13 Ed Gray. Perhaps the greatest RB in Cal history goes up against a former Pac-10 player of the year at hoops.

#6 Chuck Muncie vs #11 Joe Shipp. Muncie nearly won the Heisman in 1975 if it weren't for that dastardly Archie Griffin. Shipp was a versatile talent on the earlier decade Cal bball teams.

#7 Justin Forsett vs #10 Brian Weathers. Forsett was a steady horse who gave great effort on the field.

#2 Aaron Rodgers vs #15 Camille Leffall: Battle of the hair. Rodgers has always enjoyed his unkempt look. Leffall just looks fabulous, with or without the blond highlights and braids.

There you have it guys. Discuss away!