Share All sharing options for: Introducing Plus-Minus to Cal Hoops 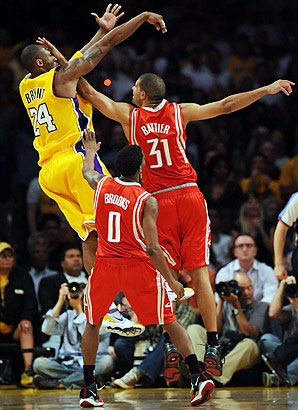 Sports fans are pretty familiar with the metrics we use to judge our basketball players. Points, rebounds, assists have been around for decades, and I can't really imagine them going anywhere.

What people don't recognize is that some of these stats don't necessarily tell us that much about a player. Other than maybe points and shooting percentage, all the other stats have a significant degree of uncertainty to them. The definition of an assist has changed quite a bit from when we were kids (and the arbitrary method in which they are assigned leaves much to be desired).

Take a steal, for instance. Dwyane Wade just had a spectacular season where he recorded 100 blocks and 200 steals (the first time a guard has done that since MJ's peak). However, what it doesn't tell you is how many times Wade gambled for the steal, resulting in leaving his man open for the wide open 3 (we have other stats for that, but that's a different story for a different time), or how many blocks ended up going back to the opposing team, giving them another possession. It's similar in football; although an interception and a fumble arguably have greater impact on the game, it isn't necessarily a sign of great one-on-one defense or good tackling form. These are actions that are being measured, not the effort in between the lines.

Hence the need for new stats. One of the most prominent is the plus-minus (otherwise known as +/-), which will be the focus of this article.

+/- measures pure point differential. Let's say Kobe and the Lakers start off the game on a 27-17 run. He gets a +10 for this contribution. Let's say Kobe comes back and his team loses a net 3 points during his duration on the floor. He gets a -3. We keep on doing this for the rest of the game, measuring how well the team performs with Kobe on the floor, and then sum up all these figures at the end. That's the basic form of +/- you see on those Yahoo Sports box scores.

Let's examine Cal basketball's first Pac-10 game this season versus Arizona. The boxes represent who was playing and the score differential during that particular game. Final boxes have the basic +/- for each player.

The starting unit started off slow. This was not an isolated occurrence (and something we'll talk about in later posts), although they had a much better start in the second half. It was only when Cal unleashed our reserves (not a normal strength for us) that we broke away from the Wildcats.

Does the data match up with the individual performances? In the most prominent case, yes. Patrick Christopher ended up with the best metric overall, and probably had the best overall game of the night for the casual observer (TedfordIsGod did attest that he destroyed Chase Budinger).

However, he wasn't the biggest swing player. Omondi Amoke and Harper Kamp were involved in the two biggest spurts of the game and would end up having the highest +/-s off the bench. More interestingly, Christopherwas involved in those stretches as well! Turns out that's supported by eye-witness observation, as indicated by CBKWit's post back in January.

Harper Kamp received the ball in the high post, occupying the middle of the 3 baseline defenders. He then gave a bounce pass to a cutting wing (generally Patrick Christopher, who matched his uniform with 23 points) who found the basket unobstructed, with the post defender occupied at the top of the key and the baseline wing defender late to leave his perimeter responsibilities. Kamp had a career high 5 assists using this play, all in the second half.

So it does seem that not only did Kamp help out in this particular game, but he helped Christopher's game as well with his passes from the high post. These are the type of cool observations you can make with plus-minus.

Finally, for the stat geeks like me, I did a few further calculations to factor in how much playing time factored into the +/-, by seeing how much the team was impacted when the player was NOT on the floor. I know some NBA statisticians use these types of formulas, although far more refined.

Here are the simplified formulas

ON % = Minutes played/Minutes in the game

Bold indicates inconclusive results; not enough PT to figure out their value to the game (generally you have to play more than 30% of the given minutes.

You'll see that Jordan Wilkes had a pretty weak adjusted +/- for an eleven point victory (also not an isolated occurence), but did see plenty of minutes. Interestingly, the team didn't do much with him on the floor, but seemed to thrive with him off of it. Monty wasn't quite as leninent with Boykin (16 minutes to Wilkes's 29), and it made his adjusted +/- look worse as California performed better against Arizona with him off the floor in long stretches.

So that's a basic run down of what the plus minus is all about. In future posts on this topic, I'll be tackling certain things that stood out from these stats, particular games that really stood out, strengths and weaknesses of plus minus, etc. Feel free to discuss your thoughts on all this fancy data and the plus minus in the comments.

NOTE: If any of our commenters here are really good at data/Excel stuff like the tables above (or, even better, data visualization), drop a line at bearsnecessities at gmail! I have a few more parts in this series and could really use your help to spruce up this dry dissertation.