In this second part of a twelve post analysis, we're going to look at Cal's early problems with execution. In case you missed the previous installment, here is Part I. 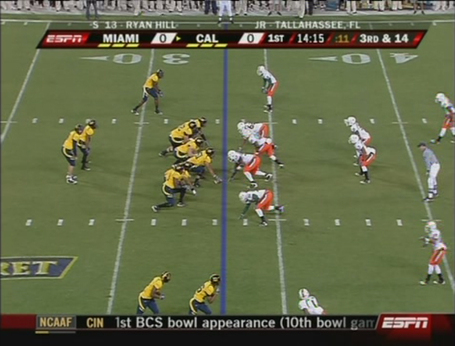 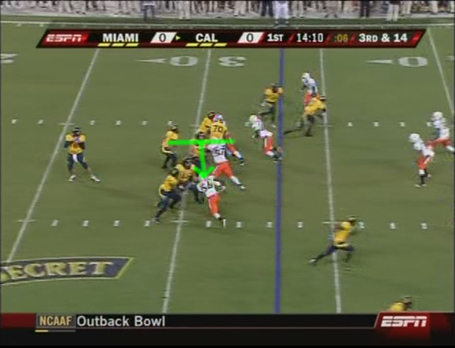 Here is the post-snap picture.  The person to look at here is the center, Alex Mack.  As an offensive lineman, you typically want your shoulders parallel to the line of scrimmage.  Or in other words, you want to keep your back to the quarterback.  In even more words, you don't want to face your quarterback, nor do you want to get yourself turned so the quarterback is to your left or right such that a line from your shoulder to your other shoulder points to the QB.  The reason for this technique requirement is to maintain the pocket.  By getting yourself turned, you lose power to sustain the block and allow for the pocket to collapse.

In the picture above, I've drawn a line through Mack's shoulders.  I've also drawn an arrow from Mack showing which way he is facing.  As you can see, Mack is not facing forward and away from his quarterback.  His shoulders are not parallel to the line of scrimmage.  Instead, his shoulders are almost perpendicular to the line of scrimmage.  Mack has gotten turned by his defensive assignment and is losing his individual battle. 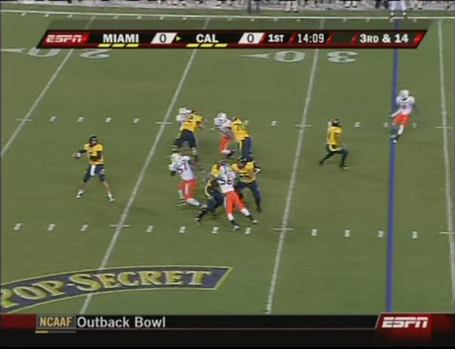 Cal's quarterback, Longshore, most quickly dispose of the ball to have a chance at the first down.  Alex Mack has fallen down and is hidden behind Miami's defensive end, Cal's right guard, and Cal's right tackle. 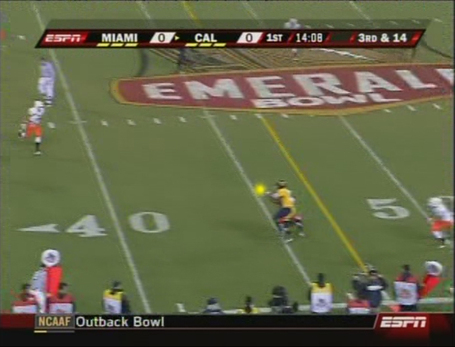 Longshore throws the ball (ball highlighted yellow).  Ross is the receiver.  The pass is broken up due to excellent coverage.

Below are additional angles showing the collapse of the pocket. 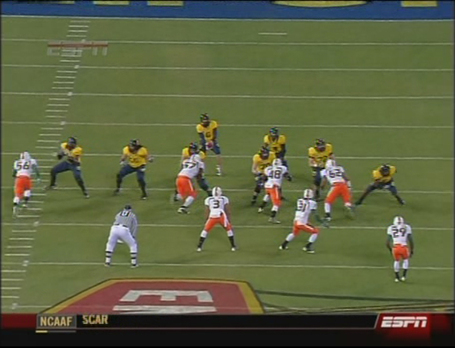 Above is the post-snap picture.  Everything is fine right now. 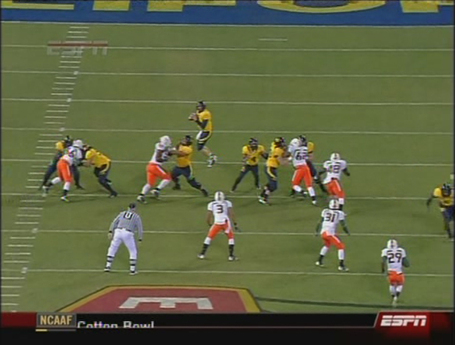 Here is where things start going bad.  Mack has been turned and his shoulders are no longer parallel to the line of scrimmage.  Cal's guards also do not have their shoulders parallel to the line of scrimmage however the rule applies less strictly to them since defensive lineman will often speed rush to the outside requiring adjustment.  Furthermore, the guards are not the center who must maintain the front wall of the pocket to allow the quarterback to step up into the pocket.  In other words, the guards can turn their shoulders and the repercussions are less harmful because the quarterback can step up into the pocket (thus the QB is behind the guards, and not to the side of the guards). 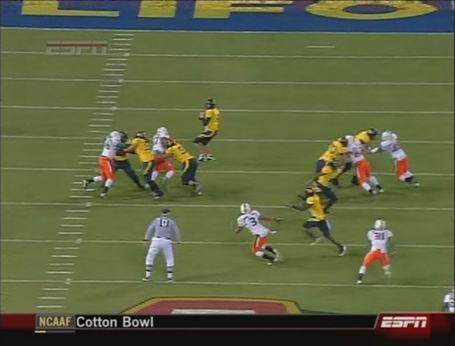 In this view it is quite clear that Mack has gotten beat.  Longshore does have some room to step up to his front-left, but all the routes are going to his right thus going to his left would have significantly decreased the chances of completing a pass.  Furthermore, had Longshore ran to his left (viewer's right), and attempted a pass to one of the receivers on his right, he would have broken the cardinal rule of not throwing against the direction of your moment.

Beyond all the other more complex reasons why a team might lose a game are the little reasons: execution.  A team doesn't need the most cutting-edge gameplan or scheme to defeat an opponent.  Nor do they need a genius offensive coordinator or tons of NFL talent.  If you just execute you can win that play and win the game.