GIVE ME STUDENT SECTION OR GIVE ME DEATH!

Share All sharing options for: GIVE ME STUDENT SECTION OR GIVE ME DEATH!

See, Webster's Dictionary defines "Ken Crawford" as a well-respect Cal blogger, who runs the site "Excuse Me For My Voice." He also hunts people for sport and fashion.

He recently wrote an interesting piece about potentially moving the student section. Go and read it, it's good stuff. Because we're about to conga-line onto his bandwagon of concepts and theories and new-fangled beliefs in something called a "Justin Forsett It And Forget It." 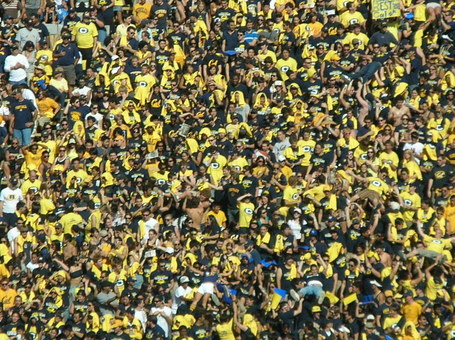 "I'm actually in this photo. Look for the guy wearing blue and also some gold." via upload.wikimedia.org

Avinash: Well, let me play devil's advocate. Take away all this 'purity of college' crap; college sports, in general, lose money for the university and divert resources away from academia. What is even more surprising is that football generally breaks even and doesn't come close to making up the difference.

The Pac-10 has also begun to feel the pinch and the situation isn't expected to get better anytime soon.

Now, Cal is currently one of the few athletic programs that can sustain itself thanks to boosters, donors, and whatever, but that trend won't last forever. So the university should look for ways to maximize its profit margin and keep itself in the black, and the obvious attraction would be giving the premium seats at Memorial Stadium to people who will pay top dollar for it as opposed to the students (who are paying essentially gold zone money for the best seats in the house).
Why would you guys be against this?

HydroTech: Charge students more money for their tickets. Also have them pay a penalty fee for not going to the game if they did buy season tickets.

Avinash: But would the student section sell out if you charged more money?

HydroTech: Perhaps it wouldn't. But this is my line of thinking. If the students are going to occupy some of the best seats in the house, charge them appropriately. If the Athletics Department feels that the students are being under-charged, then charge them more. Furthermore, because the students are occupying the best seats in the house, they better come to the games because if they don't, then the University lost out on possible revenue from a willing alumni who would have paid $250 for those seats or whatever. Thus, that is why I suggested that the Athletics Department charge the students a penalty fee for not coming to games if they bought tickets. I think Alabama has something similar to this.

Such a change would cover all interests of the program. It still allows students the best seats in the house. It still maintains that tradition of having students on the fifty yard line. It still provides excellent home field advantage by having some of Cal's most consistently loud fans at the most strategic position within the stadium. It allows the Athletics Department to increase their revenue. And furthermore, it encourages students from skipping on games so they don't get penalized.
Alternatively, the Athletics Department could charge the students MUCH more than they are currently paying, and subtract costs from the students if they attend the game. In other words, charge the students $500 for season tickets, but for every home game they attend their account will be credited $40. Thus, if the students attend all 7 home games, they'll be credited $280, and the cost of their season tickets really is $220. This alternative method accomplishes the same goal as my first suggestion but instead of penalizing the students, it rewards them. Although the result is essentially the same, psychologically, it can be more encouraging for the students to "earn" credit rather than being punished.

Frankly, I think this is a great solution to the problem, and I'm not just saying this because I put forth this idea.

TwistNHook: I think thats a great idea and Im saying that solely because I think Hydro will punch me in the face if I disagree.

That said, heres my concern. We generally sit in Section RR. This is to the left of the band. This is, ostensibly, a student section. But since its on the other side of the band, its always wide open. So, if they move the students, that might stop being so wide open and easy to go to for the games.

So, I am now 100% completely and totally opposed to any moves. 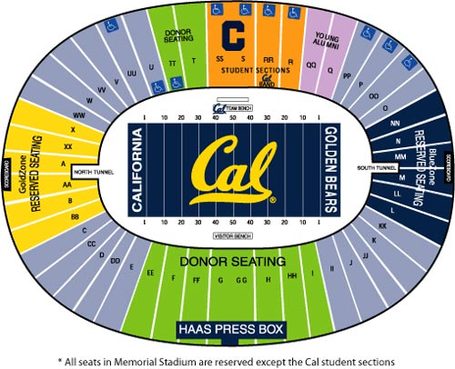 "I'd put all the students in "Haas Press Box."" via grfx.cstv.com

Yellow Fever: I'm not so certain that a plan like that would work. I have no doubt that at a cost of 220, the student section would sell out, but with an upfront sticker price of 500, you'd have to imagine a lot of students would be wary about their initial investment even if they were planning on attending every game.

HydroTech: I understand your concern, Fever. In that case, charge the students the normal fee and add a punishment clause whereby they pay an extra $30 to $40 for every game they miss.

Avinash: The biggest issue I'm seeing is that the really passionate young Cal fans (the ones that make the most noise) get priced out. College kids enjoy their football, but it's not like the most diehard fans have to go to the games anymore. They can probably sit back and watch on their friend's 50" HD, or go to one of the many huge sports bars if they feel the University is tightening their grasp on their wallets.

If we raise the prices on students, we might see a similar issue permeate the student section. Indifferent on defense, occasionally cheering when it gets late, etc. Do we really want to leave our rowdiest fans out on a limb?

HydroTech: Well, I think the solution is to then make the game-day environment one that can't be missed. And thus, those people that want to watch the game at home on their HDTVs, will be able to see the game and that's it. They'll miss out on the band, the music, the energy within the stadium, the free giveaways, etc. If Cal can make the gameday environment exciting and enticing enough so that people who stay home and watch the game on TV will feel like they're missing out on something special, then those people will start coming to the games in person.

Avinash: You don't feel moving the students to the gold zone and/or blue zones is a feasible solution?

Yellow Fever: Personally, if the game day experience is fine, I'd have no problem being anywhere in the stadium. But then you're talking about a guy who's paid for tickets in the very top row of the worst stadium in the NBA, so I don't really have the highest of standards. Still, I don't feel like the team needs to worry about pricing out too many students. Is there any problem with student attendance now? If there isn't, then in the interest of capitalism I don't have any problem with the team charging as much as they can. 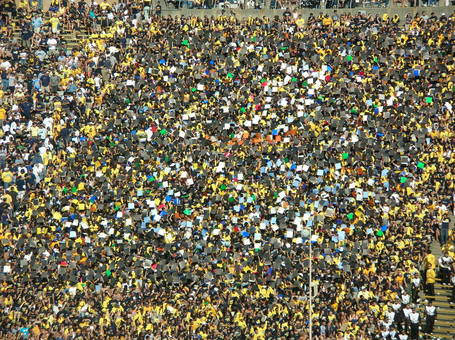 "Would moving the student section mean the end of card stunts?" via upload.wikimedia.org

Ragnarok: Man, I don't even know where to start. I'm not even sure whether I dislike this idea more than simply moving the students off the 50.

I don't know about the rest of you, but I wasn't a Cal fan until I started attending school there. I think the same goes for a lot of Cal fans. I probably wouldn't have even attended football games if I hadn't joined the Cal Band; I sure didn't bother going to football games in high school. But once I was in, I was hooked -- and given that I was watching a Tom Holmoe-coached team, you know that there has to be something special about Cal football.

All this talk about moving students into the endzones, or raising ticket prices on them, or charging them penalty fees for missing games; these are all shortsighted moves that will, in the long run, hurt Cal football. There's a reason student tickets are so cheap, and especially why there are corporate sponsors paying for free tickets for freshmen: it's all designed to induce student attendance. Students are on a budget -- many depend on scholarships and grants to get them through each semester, and tripling or quadrupling football ticket prices will just drive them away. However, if you get students to attend a few games, and if they're at all susceptible, they'll be hooked for life.

The point of having a football program is not to make money. In fact, simply not losing money should be only a secondary concern. The point, like every extra-curricular activity that the University sponsors, is to enhance the experience of the student body in general. Give students a good time, and they'll keep coming back for 50 years, putting up with crappy seats, terrible parking, and all the while donating money to their alma mater. Drive the students away, and you'll be wondering why, in 30 years, your alumni base that stays active and involved in their alma mater is so small. 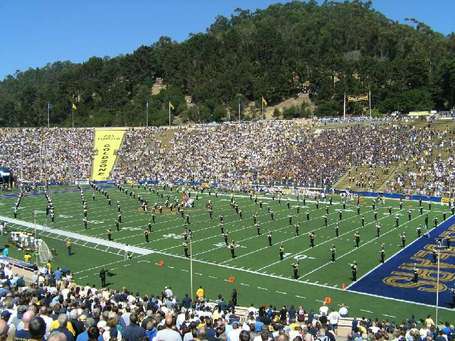 "Is this a view Cal students should have?" via www.rkgprojects.com

Avinash: You're arguing that if we move the student section to the end zones and charge the same price, fewer students would show up? I don't think end zone seats are that bad; it's not exactly like sitting in the upper deck corners in baseball or basketball games, you're still getting a fairly decent view of the game on the field, without much detriment to the viewing experience.

TwistNHook: Have you ever sat in the end zone seats? You cant tell whether that run went for 1 yard, 5 yards, or 15.

To be fair, last time I sat in the end zone was USC 2005. I couldn't tell whether the DBack returned Ayoob's interception for 1 yard, 5 yards, or a TD. So, I might have some Vietnam-esque flashbacks to that proposal.

Ragnarok: No, I'm arguing that if you raise ticket prices, you'll get fewer students to show up, and if you start instituting penalty fees for not showing up, you're going to get fewer students to purchase student tickets in the first place. I'm also arguing that if you diminish the student experience, you'll get fewer of them to come back as alumni (and this is true whether you're talking about Cal football, or other sports, or the classroom experience, or whatever). Make the students love their four years at Cal, when they are poor, and you'll be repaid over the next 50 years as they become well-to-do alumni.

Moreover, I was arguing at the beginning that moving the students off the 50 and marginalizing their impact on the crowd and on the football game will only serve to diminish the experience for everyone involved. What I like about the ESP program and much of the renovation plan in general is that it brings in significant new revenue from the small portion of the fanbase that is able to afford it, and it does this by significantly enhancing the perks they receive and their overall gameday experience, without significantly detracting from the experience of the vast majority of the fans. Displacing the students to appease some portion of the general season ticket base (you know that the vast majority will put up with reseating without complaint) does not achieve the same level of unobtrusiveness.