First of all, I would like to apologize for the tardiness of these posts.  I had hoped to begin these in at the start of June, just like I did with the Armed Forces Bowl Review series last year.  Unfortunately, I have had much less time this summer than I expected.

When I did start working on this series, I noticed a disappointing trend in my drafts.  The plays I wanted to write about were not good plays, but bad plays.  Plays where Cal's offensive players made mistakes, and the team paid for those individual mistakes.  While football is a team game, it's a team game made up of small individual battles all over the field.  These individual battles make up the team.  A team can only be as strong as it's weakest link.  If all the players aren't weak, and execute to perfection, then the team should prevail over the other team.  But if merely one player loses his individual battle, the entire team can fail.  Unfortunately, I saw a lot of that during this game.  The more I watched the game, more lucky I felt that the Cal offense was so lucky to have such a great defense to help them keep the game manageable.  Similarly, I felt like the entire team was incredibly lucky for having a 1st Round NFL talent at runningback who could take the rock to the house when everything did go right on the field.  I think that without the defense holding down Miami's offense throughout most of the game, I don't think Cal's offense could have scored enough to match Miami.  Likewise, if it wasn't for Best's home run ability, the Cal offense would have been forced to sustain methodical drives which isn't desirable (in most situations), and something the Cal offense might not have been able to do.

Anyways, the purpose of this series is to just show the casual fans some things which they might have missed when they watched the Emerald Bowl on TV, or from the stands, or even after the 528th viewing.  I think this series will be a little less technical than last year's series, but I hope you still find it worth reading.

In this first part of a twelve post analysis, we're going to look at Miami's defensive strategy on passing downs. 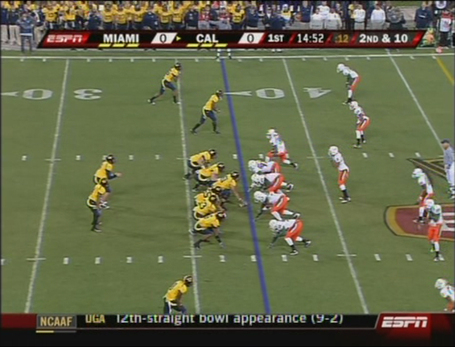 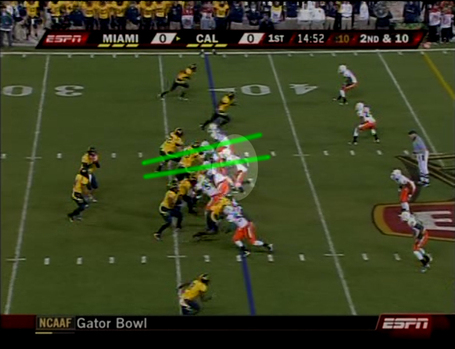 Above is the post-snap picture.  Miami is pass-rushing with their four defensive linemen, a defensive back off the off the edge (on the offense's left), and a linebacker (who is circled).  The linebacker is attacking the A-gap.  The A-gap is the space between the center and the guard.  In this case, the linebacker is attacking through the left A-gap, meaning the gap between the center and the left guard.  Because the center, Alex Mack, is already pre-occupied with his assignment and the left guard, Boskovich, is pre-occupied with his assignment the Miami linebacker is going unblocked into the backfield. 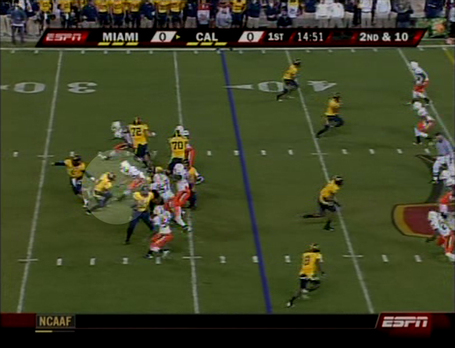 In this case, the play is actually a run play.  Specifically the play is a draw - a run play that starts off looking like a pass play to fool the defense into thinking it's pass to open up running lanes.  Unfortunately, Miami's defense and Cal's offense playcall are a recipe for disaster (for Cal) and allows a Miami defender into the backfield untouched (circled above). 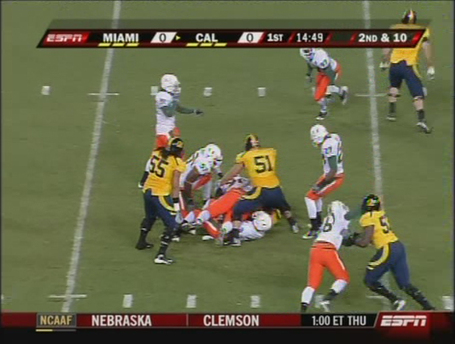 The play results in a four yard loss.  Although Miami's defense was probably suspecting a pass, the fact that Cal was running the ball does not change the fact that Miami is already showing their hand on how they are going to pressure the QB on passing downs.  Miami, as in the play here, is going to blitz the A-gap.

It is not surprising that they are using this strategy.  Blitzing the A-gap gets quick pressure on the QB, and even better, gets the pressure directly in his face.  Most quarterbacks, when confronted with pressure in their face throw off their back foot leading to weak and lofty passes ripe for the picking (getting intercepted).  Cal's quarterback, Longshore, shares this typical flaw.  In the past, when Longshore has been presented with pressure from the center of the pocket and in his face, he has been reluctant to step up into the pocket and instead passes off his back foot without stepping into his throws.

As an offensive coordinator, this would be your first big clue into how Miami's defense is going to operate in the future.