Hall of Fame Round of 64: Joe Kapp Bracket, Part II

Share All sharing options for: Hall of Fame Round of 64: Joe Kapp Bracket, Part II 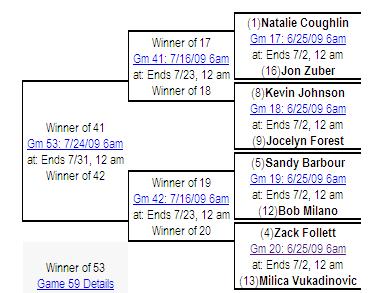 We continue on with the top half of the Joe Kapp bracket; top two matchups were posted this morning, and now we move onto the bottom two this afternoon. Polls for these matchups close next Thursday at midnight. The athlete matchups are above, the athlete descriptions and polls are after the jump. Please read, vote, and debate in the comments. 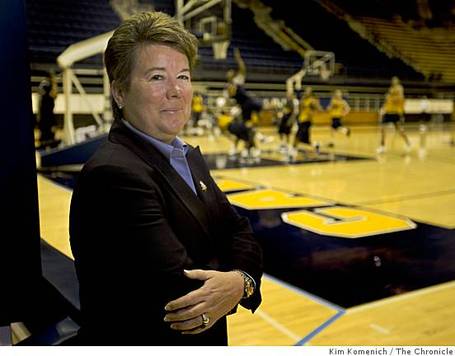 Although Sandy B gets a lot of credit for something she didn't do (the previous AD hired Tedford), she, nonetheless, has been one of the best ADs in Cal history.  She was a historic hire as noted here:

The surprise pick makes Barbour, 44, the first woman ever to head Cal's sports program, and the first appointment by Robert J. Birgeneau, who doesn't assume his official duties as chancellor until next week. Wearing a blue-and-gold Cal necktie, Birgeneau noted that the announcement - a topic of intense speculation among Cal boosters and media wags alike -- came on his third day as a UC employee, and said he "couldn't have imagined how exciting it would be."

Cal has rocketed up the Director's Cup Standings since Sandy B came out here.  Although she focuses strongly on the two revenue sports, she does not ignore the non-revenue sports, which can be just as important to school spirit.  We have national champions in sports like women's swimming, discus, and crew.  Not to mention elite teams, like women's volleyball.

I think she'll most known for her work to help shepherd the Memorial Stadium upgrade through.  It was a long process and many other people, including many Cal fans, lost patience with the process.  But she understood how things worked, kept unimportant problems unimportant and has Cal moving towards owning elite facilities.  That's the job of an administrator, really.  To provide leadership on important projects and make key decisions towards improving the metaphorical and literal playing field for our sports.  And she has provided that in spades.

California Pete has an epic writeup on Milano:

For the better part of four decades, Bob Milano was the heart and soul of Cal baseball. He played catcher for the Bears in the early 1960s. Then, after a brief semi-pro career in western Canada and a decade coaching and teaching at Burlingame High School, Milano returned to Berkeley in the ‘70s to serve as the Bears’ assistant coach and assistant athletic director. All of this was prelude, though, to his 22 years at the helm (1978-99), during which his teams’ 668 wins made him the winningest head coach in school history. Earlier this year, Milano was elected for induction into the American Baseball Coaches Hall of Fame, topping a long list of career achievements, which also include the following:

When I arrived at Cal in 1985, Milano was the senior member of a triumverate of charismatic coaches leading the three major men’s sports. Indeed, he seemed a perfect fit alongside football’s Joe Kapp and basketball’s Lou Campanelli. None of their teams were conference (let alone national) powerhouses, but all three men instilled a competitive fire in their players that made them a lot of fun to watch. For Milano, this meant the occasional belly-to-belly, nose-to-nose rhubarb with the umpires that always livened up an otherwise lazy weekend afternoon at Evans Diamond, and given the intimacy of the setting, fans were always well within shouting distance themselves. Alongside the series with Stanford, I always looked forward to the Sun Devils’ annual trip to Berkeley. ASU was, arguably, the premier team in the Six-Pack, and it was clear to all that Milano had a less-than-friendly relationship with his counterpart from Tempe, the late Jim Brock. I don’t know the full story, nor how much their feud extended beyond the diamond, but it centered around the 1988 College World Series, when Brock’s Devils handed Milano’s Bears a painful first-round loss using a bit of gamesmanship that stretched the boundaries of conventional baseball ethics. Leading up to the game, Brock had implied that he’d start his right-handed ace against Cal, only to surprisingly start the left-handed Rusty Kilgo in his place. As the New York Times explained, Brock was happy to ’fess up to the deception:

Brock said that he had not lied, since he had not specified a starter. When asked if his move was a breach of etiquette and whether it would affect Pacific-10 relations, Brock said: ‘’If you had to sacrifice 20 years of good relations to win today’s game, I would have done it.’’Milano said he did not intend to speak to Brock about the issue. ’’I’ll file it away,’’ Milano said.

Lest anyone get the wrong impression, while a fierce competitor himself, Milano has long been revered around Berkeley as a gracious gentleman. That was certainly the impression I got in the few interactions I had with him myself, during my days at KALX. Ohio Bear recalls the same:

It was my play by play broadcast debut in the 1990 season. It was a brutal season for Cal baseball, but Bob Milano was the same old Bob. Anyway, we went down to the field to do the Bob Milano show taping and my broadcast partner informed Coach Milano that it was my baseball broadcast debut.

Bob: "That’s great. So is your mom going to be listening?"Me: "No, not that I know of."Bob: "Well, if your mom’s not even listening, I guess you’re not any good."

Awesome. (Yes, he was kidding.) Broke the ice nicely for my nervousness.

One of the things he was always gracious to do was the "Bob Milano Show," a pregame show that was pure Bob monologue. He’d take the mike and go 5 minutes. Awesome. It was a never fail lesson in baseball and candor, with the occasional funny malaprop. My favorite of all time was during a season in which a USC baseball player named Mark Smith shred us. He batted something like .600 against us that year and won 2 games with game-winning HRs. Yet, for whatever reason, Milano kept calling him "Chris Smith" over and over again. Gave him props, sure. But never got his name right! 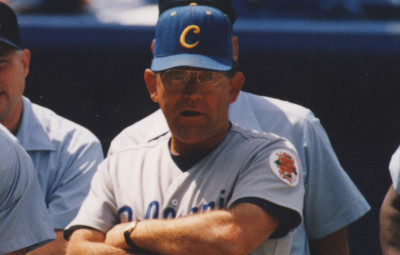 And the Bob Milano legacy at Cal is far from complete. His son, Bob, Jr., is the Assistant A.D. for Capital Planning & Management. There is also a Diane Milano on the staff, who manages Cal’s Spirit Groups, but I don’t know if she and the Bobs are, indeed, related. (And to be honest, I’m assuming Bob and Bob, Jr. are father and son, but that is subject to fact checking.) 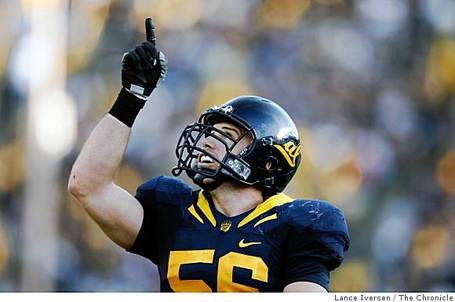 OH HELLO THERE, DUMPSTER MUFFIN.  WHAT'S THAT? YOU DON'T KNOW WHETHER TO USE SILK OR COTTON SHEETS ON THE GUEST BED? AND YOU'RE TIRED OF YOUR JOB?  WELL, PERHAPS YOU SHOULD HAVE THOUGHT OF THAT BEFORE YOU JOINED YOUR LITTLE PROTEST.  THEN THE JUDGE WOULDN'T HAVE SENTENCED YOU TO BE MY BUTLER FOR LIFE.  I REALIZE YOU THINK THAT'S UNFAIR, BUT WE WILL TALK ABOUT IT LATER, I'M CONDUCTING AN INTERVIEW RIGHT NOW.  NO, I HAVE TO GO, NO, YOU CAN'T SIT ON THE OAK CABINET, IT'S AN ANTIQUE FROM THE ESTATE OF SIR THOMAS CALHOUN.  NO, LIKE I SAID, YOU C--NO!  NO!  DO NOT ANTAGONIZE PAIN TRAIN FURTHER.  PAIN TRAIN JUST MAY EXTRACT YOUR ARMPIT HAIRS ONE BY ONE JUST LIKE HE WOULD HAVE LIKED TO REMOVE THE OAKS ONE BY ONE.

JUST LIKE HE REMOVED PRETTYBOY QUARTERBACKS ONE BY ONE.  FOR FOUR YEARS.  ERIK AINGE STILL HAS A TRAIN SHAPED IMPRINT ON HIS EIGHTH AND NINTH VERTEBRAE.  LET IT BE KNOWN: TOM BRADY WILL WISH HE TORE BOTH HIS ACL'S AND BE OUT FOR HIS CAREER, BECAUSE PAIN TRAIN IS ABOUT TO TEAR TOM BRADY'S SOUL WITH THE AMOUNT OF PAIN HE WILL IMPART. DO YOU HEAR THAT, NFL QB'S?  PAIN TRAIN IS ATTENDING YOUR POTLUCK.  AND HE IS BRINGING ONLY PAIN.

LeonPowe talks a little about Milica:

Nowadays we take big point guards for granted. But in 1991 and 1992, aside from Magic Johnson, there wasn’t really any big player taking the ball off the rim, powering down the court on the fast break and then either pick out the open (wo)man or take it to the rim for a lay-up. But before players like Lamar Odom, Penny Hardaway, Diana Turasi, Alana Beard, Jalen Rose and Steve Smith were on the scene – Misha was the bridge between eras (okay, not really, but work with me).

Standing 6’1" but handling the ball and running the Bears offense with flair, the Belgrade native was nicknamed by the Cal atheltic department as "Lady Magic" – she was voted All Pac-10 twice and Kodak All American once – leading the veteran Bears (um, I’m going to guess as to who was on that team – Jackie Lear, Trisha Stafford, Ingrid Dixon, Keisha Martin, Kim Robinson?) to two straight NCAA berths.

Here’s what the Cal Athletics site has to say about her:

One of Cal’s only first team Kodak All-American (1993) in women’s basketball history…Vukadinovic propelled the Golden Bears to NCAA postseason berths in each of her two seasons with the program…two-time first team All-Pac-10 choice led Cal to the 1992 and 1993 NCAA playoffs…a member of the Yugoslavian National Team, she would have competed at the 1992 Barcelona Olympics if her country had not been banned…Vukadinovic, also a GTE Academic All-American and two-time first team Pac-10 All-Academic choice, ranked as high as fourth in scoring average (15.7 ppg), sixth in assists (358) and third in three-point shooting percentage (.389) among Cal’s career leaders…voted the school’s women’s basketball Player of the Decade for 1986-96.

Personal Memories – I made it to every woman’s basketball game I could – especially when Misha was playing. I have this weird love for big point guards -Magic, Steve Smith, Penny, Billy Owens, Lamar Odom, TMac (2004-2006 only), are among my favorite players – and Misha joins them. I can still see her pulling the rebound down and "powering out" (like Magic used to) and then finding Jackie Lear with a one hand 30 foot bounce pass, or shaking her defender with a left to right behind the back dribble, before nailing the 3. Before the age of do-it-all women players – she was it. Could handle the ball, rebound, score, shoot from distance, pass and was a decent defender.

I have some personal memories of Milica. (Her nickname on the team, BTW, was "Meets.") I did a lot of the women’s games for KALX in 1992 and traveled with the team a lot. I had never before seen a woman do the things she could do with the basketball; she was incredible. In addition to everything you describe above, she also had a knack for the shot fake or the pass fake. And then BOOM: she was by you. Away from the floor, Milica was quiet, but seemed to get more comfortable as the season went along. If I’m remembering the story correctly, her basketball scholarship opportunities when she came to the U.S. were at either Cal or UNLV. Through her country’s basketball federation, she was put in contact with then-Laker Vlade Divac to solicit advice. My memory is fuzzy on whether I got this information from Milica directly or hearsay from Coach Gooch Foster, but the story goes that Divac told Milica to go to Cal for the degree because "Vegas is just a basketball school." So thanks for the recruiting assist, Vlade.

One more note: not sure who called her "Lady Magic" first, but I distinctly remember Tara Vanderveer calling her "the Magic Johnson of women’s basketball," unprompted.