#2- Rushing The Field After Big Game

Here it is!  The shining moment.  It's taken months.  You've all been holding your breath in wild anticipation.  But we are here.  Finally.  The #1 moment.  What is it?  What could it be?  Is it a touchdown?  Is it a big sack?  Is it a huge run?

Well you got got!  Because it's not really an on-the-field moment at all.  And this moment kind of lasted several months, if not several years.  Yes, this is perhaps the most important thing to happen to Cal football during the 2008 football season: 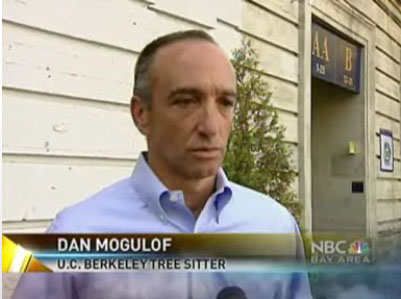 "Dan Mogulof Must Be Stopped By Any Means Necessary!"

TwistNHook:  This is what I was singing on that fateful September day:

Ragnarok: Oh, Twist, your stories are always so irreverently apocryphal, but rarely so delightfully anachronistic as well!

Can I get a Ragnarok-English translation.  I put his stuff through Babelfish, but all I got was:

And that wasn't very helpful.  And I don't appreciate being called "fold"!

Ragnarok: Big words are hard, I know.  Did you translate it through Old Norse and back? 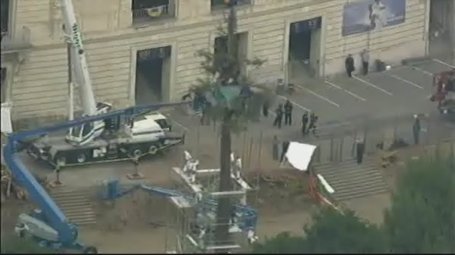 I'm referring, of course, to the fact that Bak Bak didn't commit to come to Cal until October of last year.  Before this time, none of us at CGB had ever heard of him, which makes it highly improbable that you were praising his name last September.  TwistNHook has many talents, but prescience is not known to be among them.

TwistNHook:  If there is one thing I'm known for it is keeping in depth tabs on collegiate basketball recruiting.  So, don't doubt the veracity of my story.

That said, I fear we are getting a bit far afield here.

Avinash:  I've always wondered...did the treesitters presence have a karmic effect on their season? I wonder as the season got worse and worse and Cal football players had to walk by...THAT...it probably had a depressing dreary effect.

One of those crazy sociological phenomena. We need to get Malcom Gladwell on this.

I suppose they would say something like: it's better to damage the grove than to remove it completely.  However, that argument ignores all the facts that the trees were old and dying, and that Cal was going to plant like 4X the amount of trees for the renovation.  Simple math must not compute for tree sitters, yeah? 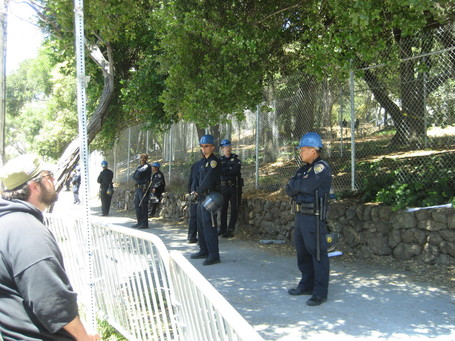 Yellow Fever:  Anybody have that great Musburger vid?

I suppose replacing the existing trees with more new trees just isn't a good trade.  I mean, to me a tree is a tree, but obviously things are a bit different if you're the kind of person who takes on the name Dumpster Muffin.

Avinash:  "You are LOOKING LIVE at a group of treehuggers in Bezerkely!"

Does anyone think that if the SAHPC had been delayed any longer, Cal would have struggled this past season like they did in '07? I never enjoyed going to those 2007 games after Tennessee because I always had to walk past that circus, and I get the feeling the Cal fans themselves never really felt in their groove. In 2006 the fans were great, but after the first encounter with the treesitters we were always a little bit uneasy at what was happening outside. I can only imagine how the athletes felt.

Ragnarok:  Nah, I think the whole "who's the quarterback this week?" charade was far more distracting than any hippies remaining in the trees might have been.

HOWEVER, had the hippies succeeded in actually halting this project, instead of merely delaying it, I think we could have seen a real backsliding of the program.  We may not have seen any change in '08, but I really think recruiting would have gotten more and more difficult, and Tedford may have eventually jumped ship.  To UW?  Who knows.

TwistNHook:  Did the hippies actually delay it?  The rich people up in the hills definitely delayed it.  The hippies accomplished nothing.  As soon as the injunction was dropped, Cal moved in.  They delayed it like a few days, at most.  It was a Thursday when the injunction was dropped.  Friday, most of the trees were out.  Tuesday, I think, was the big day when the hippies finally came out.  I might have those days slightly incorrect, but it was just a few days of actual delay.

Thats what the problem was.  The hippies were just a smokescreen.  And a horrific one, at that.  People so much hated the hippies that Cal got a lot of good PR out of it.

Were there any benefits at all in any way shape or form to the tree-sit?  I mean looking at it objectively, not just from our obviously biased angle.

Ragnarok:  The protest was good at raising people's awareness of professional protesters like Ayr and Running Wolf.  Also, it may have caused some people to have an honest discussion about the environment and the value of trees, despite the nonsense that the protestors were spouting.  I'd like to think that I learned a lot about California oak trees last year. 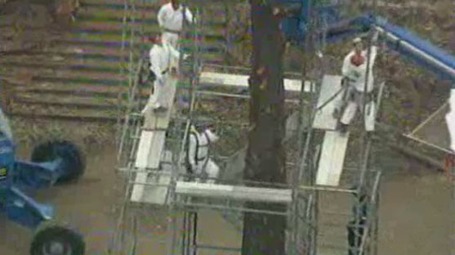 Oh, and the hippies also gave us untold amounts of hilarity to pass the time last summer.  So, that's worth something?

Avinash: Is it worth something? Because for me it's kind of worth nothing.

If it were any other city on Earth, those douchebags would've been teargassed, and rightfully so. They're attention whores of the worst sort. That year in the trees was one big plea for "Mommy, why didn't you hug me more?"
If I were the Cal Athletic Department (or some booster for the university), I'd have sent therapists up into the trees to talk it out, and then sell it to a cable network. It'd be like one of those A&E reality shows where people figure out how screwed up they are. If you can't pepper spray them, profit. 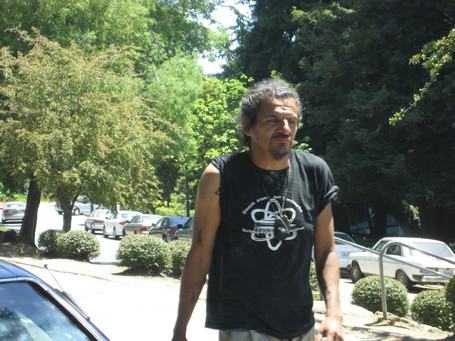 Twist, you know these shows better than me. Which show would that resemble that the best?

TwistNHook: Actually, for CGB, that was worth a lot.  We hit the big time when the whole hippies thing blew up. Our numbers exploded.  When Oaktown was doing his legal analyses of the rulings, people were just eating it up.  The bestest thing, BY FAR, that the hippies did was propel CGB forward.

So, thank you Dumpster Muffin.  Thank you, Ayr.  Thank you Runnie Dub.

And no, in any other city on Earth, they wouldnt have been teargassed.  Cal played it right.  Doing just enough to keep the hippies from hurting themselves and ignoring them otherwise.  Why give them the "police brutality?" label?  Why let them get ANY PR.  The people asking for violence or asking for a more aggressive stance by Cal had no idea what they were talking about and were some of the most frustrating people to deal with.  Almost worse than the hippies themselves! 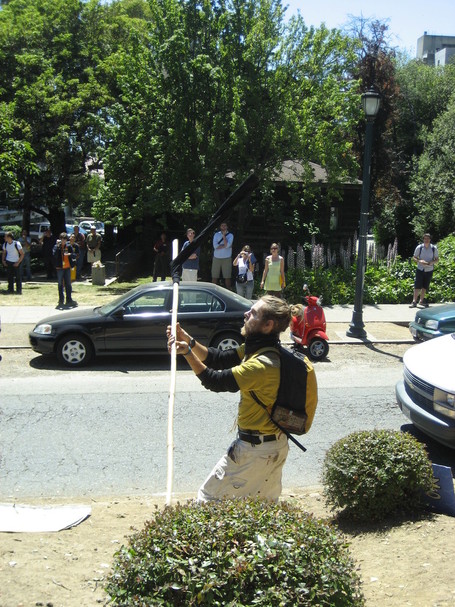 Avinash:  Except covertly infiltrate a division of fire ants into the trees.

TwistNHook:  Seriously, though, there are few things that anger me than people who want to unnecessarily make unimportant problems important.

The hippies, despite all outside views, were an UNIMPORTANT PROBLEM.  It took 2 years to defeat the rich hill people.  It took 2 days to handle the hippies.  So, why make an unimportant problem potentially important by using violence?  And then what?  You have them out of the trees.  You STILL cant tear the trees down due to the injunction.  So, you have to still keep up all the guards and whatnot to make sure nobody goes back in.  And what's the percentage chance of being able to keep these people out?

Especially since now you've quadrupled the size of their "army."  It angers me to this day, the problem solving skills of some of these people, Avinash apparently included. 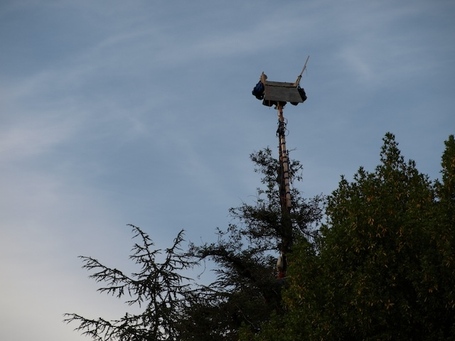 Avinash:  That's the beauty of it, the ants are still in the trees. And those things bite. The hippies were only up there because there was no resistance. Ergo, when resistance is encountered, they evacuate and take their pot-smoking elsewhere.

We just have to make sure they can't reproduce so they don't stay there forever, so it has to be all female ants and no breeders. And also that the university has no involvement in it. Clearly it has to be an outside job.

TwistNHook:  No, when resistence was encountered (in June) they redoubled their efforts.  Remember when they kept trying to get backpacks and whatnot into the trees, because Cal had blocked it off entirely?  Think that, but times 10.

HydroTech:  Did any reasonable students and/or other citizens actually support the tree sitters' cause? 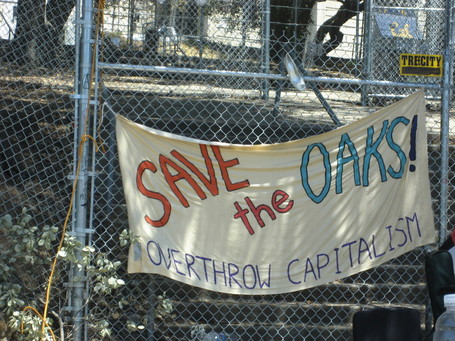 "Because they two are in every way related."

I mean, I know some people sympathized with the tree sitters for getting starved out and stuff for like 2 days (until the University agreed to feed them), but I don't think any people actually supported the cause of the tree sitters.  I think that just goes to show the unreasonableness of the tree sitters' position.  When you're in the minority, and everyone else is saying the opposite of you, sometimes you gotta wonder if what you're saying is right.  I suppose I can speak from experience since all of 2007 I was one of very few people who wasn't jumping on the "bash Longshore" bandwagon and was repeatedly defending the guy for his play.  Although, that situation is slightly different since we all (the fans) were outsiders and not privy to the information that was available to Tedford and Longshore regarding the QB situation, whereas we all were privy to the information regarding what the tree sitters wanted and what the University was going to build after destroying the grove.

Avinash:  Here's the Facebook group.  Just from the looks of it, it seems to have engendered support from hippies, enviornmentalists, arborists, and people who hate sports. Good times. 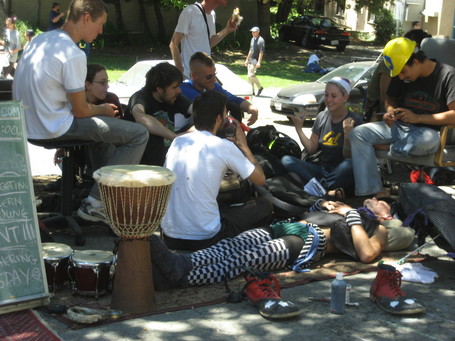 I can't believe we wasted 2% of our lives on this? Maybe termites should've been used instead of ants.

TwistNHook:  I wasted MUCH more than 2%!

Well, this is about as good a place to put some of our award-eligible posts:

First, CBKWit and I went deep undercover to the hippies defensive drills.

We even got cited by Wikipedia!

But don't feel too bad for CBKWit, wherever he may be, because he was on the scene when it allza went down.

And there was a lot for him to write about!

Oaktown and Danzig were giving us in depth legal analysis. 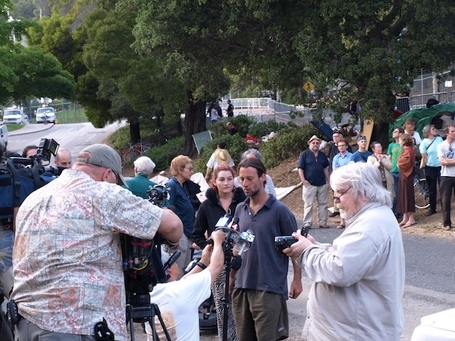 And that was all in one day (an overview of which is found here).

But that's not all!  Because it dragged on for months more.  And CBKWit was at it again, expressing his voice in a democratic fashion.

And he expressed his voice a LOT!

We even got a bit uppity towards the Chronicle.

And finally, on that fateful September day, after all the lawyerly stuff had ended, we liveblogged a bunch of people getting the boot.  Here's the final post, which links to earlier posts.

We helpfully have a Memorial Stadium Upgrade post section, so you can easily re-find all this information.

Whew!  That was like 2 years of my life run through in a few links.  I feel tired.

Finally, don't forget my overview of the hypocrisy of the tree-sitters.