NorCal or SoCal: Choose Your Destiny!

Share All sharing options for: NorCal or SoCal: Choose Your Destiny! 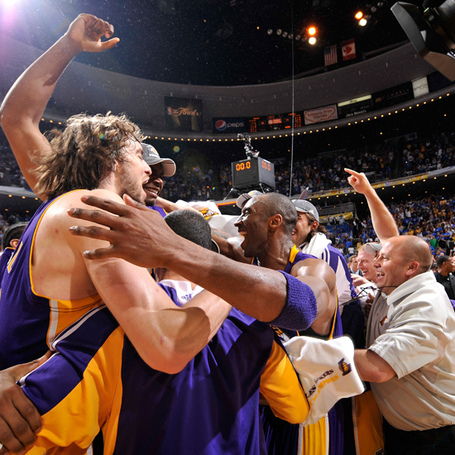 Cal sports fans are generally divided pretty evenly between Northern and Southern California residents. Cal takes about an equal amount of students from the Bay Area and Sac-town as they do from LA and San Diego. So you shouldn't be surprised that while a significant number of Golden Bears were rejoicing this Sunday when the Los Angeles Lakers won their 15th NBA championship, another sizable contingent of Cal fans were seething. NorCal and SoCal just don't get along when it comes to sport.

There is no doubt an attitude difference between the two regions when it comes to their sports, especially when they clash with each other. While NorCal fans can get embittered, cynical, dour, even outright hostile, SoCal fans can get bandwagonish, arrogant, often obnoxious about their success. Of course there are positive emotions too, but that's another discussion. Not exactly the best mix.

And there is good reason for these attitudes. NorCal sports have experienced....uh, limited success, especially compared to their Los Angeles counterparts. And that includes our Golden Bears, in regards to USC and UCLA. 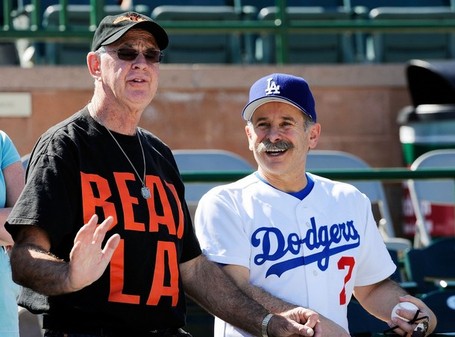 Sacramento & Golden State have been afterthoughts compared to the Lakers in the NBA; the former have had very brief runs before sinking back into the shadows. The Dodgers and Angels have beaten both the As and Giants countless times. San Jose-Anaheim matchups usually do not endwell for the Sharks. Only in the NFL has NorCal had a triumphant run, with the Niners dominating the 80s and early 90s and the Rams remaining an afterthought; even now though, the Chargers seem to be the current best football squad in California while the Raiders and 49ers have struggled to avoid the title of "worst franchises in the league".

I mean this in the classiest way possible, but Chocolate Fudge the Lakers.

THE LAKERS WON THE CHAMPIONSHIP, WHAT IS WRONG WITH YOU. WHAT SORT OF MASOCHIST ARE YOU!?!?!

We need to band together. We cant have these fissions. The Lakers are hte enemy. Not you and me. Lets stop the feuding and afussing.

You can see how these attitudes fester and boil over, as one side envies the glory and the spotlight of the other, while the other side seems to revel in it continously without really bothering to think what their counterparts have to say. Why should they? The Lakers are the champs, while the Warriors have gone nowhere..

And of course, you see this attitude in college sports too. Cal & Stanford athletics have been afterthoughts in the national consciousness compared to USC football and UCLA hoops.

USC football might respect Cal football, but we're ultimately an afterthought to them compared to the SEC and Big 12 schools that they compete against for national titles and BCS berths. Whereas it seems every year, the destiny and success of the Golden Bear rides on that one showdown with Tommy Trojan.

A similar pattern emerges when we face UCLA in hoops. Although not exactly the basketball powerhouse it once was and still second-rate (it's been 30 years since Wooden) compared to the Dukes, North Carolinas and Kentuckys of the world, they are still the top West Coast school in the nation, and an immediate draw to the best talent on the West Coast, especially in California. Cal has had only brief spurts of success against them, so every win we get is treasured. But again it's just a lack of acknowledgement. UCLA still considers itself far about Cal in the basketball scene, so their fans ignore us, focusing their hatred across town.

You wonder if the NorCal/SoCal rivalries have permeated our usual hatred of the Furd and redirected it toward the Los Angeles schools. You get the sense that with the Furd struggling and both Cal football and basketball looking to make the leap, that we've transferred our negative emotions down the I-5 corridor toward teams closer to our level. Cal fans are left with one-sided hostilty directed toward two schools that probably don't give a crap about us. Is this how Lakers-Clippers goes?

For NorCal people though, it's as much hatred as envy. Envy at how easy their fans have it compared to Cal when it comes to attracting young talent. Los Angeles is a natural attractor. It's sunny and 80 every day. It's got glitz and Hollywood, it's got the beach, the shopping centers, the lifestyle of chill. And that seems to be the way SoCal fans treat their teams, laidback with a hint of arrogance and impatience (well...most SoCal fans are like that). They have it all, so they want their teams to always succeed.

NorCal on the other hand? Very very uptight, dour, downcast. Just looking for some way to inject life into the local sports scene, just looking for something to go right. When it goes wrong, doom and gloom, always and forever. When the Warriors made a surge that one season, everyone went crazy because there had been nothing to go crazy about for nearly half a decade. Perhaps we need an attitude adjustment.

Of course, there is one interesting note; for Cal & UCLA fans especially, there is more mixing of the two different cultures. There is a dichotomy of rooting interests between both fans from both NorCal and SoCal, where they blend and form a cohesive whole. I've always wondered: Do the cultures rub off on their rooting experiences as fans? Or does a SoCal sports fan leave the Cal sports scene as petrified as the NorCal fan?

So ponder these questions in the comments. How do you feel about NorCal and Socal? Which region do you prefer? What are the virtues and vices of each region, and do you believe the differences are that big?

Cal-wise, if you were a NorCal student at Cal, what were the interactions like with SoCal people (and vice-versa)? And do you feel NorCal or SoCal sports fans who were Golden Bears root differently for Cal, attitude-wise?