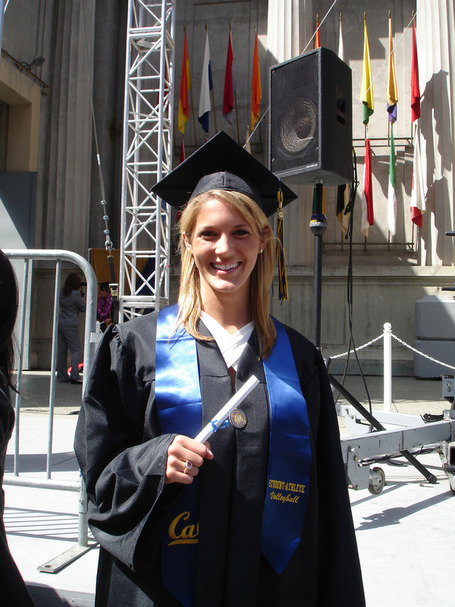 As graduation ceremonies concluded and another set of Cal athletes moved on from college life to the real world, we here at CGB have been looking for ways to honor their commitment to our school. Our student athletes work hard to do good work both in the classroom and in the arena, they

provide us with plenty of pleasure (and occasional pain), but their efforts are awesome and they deserve all the dap we can give them.

Henceforth...we announce the beginning of the CGB Hall of Fame, our Internet shrine to your favorite California athletes and coaches!

Just like Meme Madness (except this is totally about Cal sports), we will conduct a tournament out of 32/64 of Cal's greatest into our inaugural CGB Hall of Fame Class of 2009. It'll be running through mid-August, with the winners being announced the week before the 2009 season kicks off. And the matchups...man. Aaron Rodgers vs. Jason Kidd? Marshawn Lynch vs. Natalie Coughlin? Leon Powe vs. Deltha O'Neal? The possibilities are endless!

So in the comments section, create your nominations and be sure to explain why. Rules for the contest are after the jump!

1) In terms of athletes, seniors or past graduates only. Juniors like Jerome Randle and Jahvid Best will all get their turns in the future. In terms of coaches, five year cut-off. Tedford and Clark are eligible because of their longevity; Joanne Boyle still needs another year.

2) Nominations only for people you've watched in person. We decided that all-time would just be a replication of Cal's Athletic Hall of Fame, and a little too museum-ish. We want this to be about how the readers feel about particular athletes, and how their experiences with them shaped their Cal fandom.

3) Obviously, football (and basketball) players will dominate this section, but we'd like to have at least a few athletes from the other sports. We'd love to highlight Cal athletes who don't get much of the limelight when they're playing here.

4) The bracket will be somewhere in the 32-64 range, depending on the number of athletes who get nominated. It'll pretty much follow the Meme Madness format, with either several posts on one or two days a week or one humongous post per day with multiple polls.

5) We'll incorporate those comments in our writeups for the bracket matchups. If a player has already been mentioned, rec it again and reply to that comment thread and add your thoughts on that athlete, and we'll be sure to feature the best thoughts throughout.

You can nominate multiple athletes, but you must use different posts. For why, see (6).

6) We will determine seeding by the number of recs a player gets in his nomination post in this thread. The more recs an athlete gets in the comments, the higher his seed will be. So if Nate Longshore gets 7 recs and no one else gets higher, he'll get the #1 overall seed. If there are ties in the number of recs, we'll probably just go in alphabetical order, so rec your favorite athletes vicariously!

If we have less than 64 athletes, they'll all qualify for the tourney and we'll have some bye system in place. If we have more, we'll eliminate athletes with zero recs in some sort of fashion.

7) We will induct at least the Final Four (so we won't go all the way until the end, we conclude manners at the Elite 8). If you guys think the field should be expanded--a wild card pick among the losing four, two wild card picks, the Elite Eight all get inducted), let us know in the poll.

8) We're still coming up with a place to honor them in our cluttered site. If anyone has creative ideas shoot them off in the comments or drop us a line at goldenblogs at gmail dot com.

9) Twist is not eligible for nomination. We're not sure if he can bench the bar.

Nominations will be accepted until Friday afternoon at noon PST, at which point we'll set the brackets and start organzing the tourney for next week! Let the fun begin!