Ok, here is the 4 v. 13 matchup, Twist Evicts Grandmothers (4) versus 33Swisher Sweet (13). Read all the information behind the fold and then vote in the CGB Meme Invitational Poll.

Here we have essentially a battle between two assholes. Who will be the biggest asshole? On one hand you have a man whose sole mission it is to evict grandmothers. Dear old grandmamas, just trying to make it in this world. What did they ever do to Twist to deserve this????

And on the other hand, you have what is the world's least horrific "Worst Troll At Blog." We are lucky, in one sense, that 33SS is our worst troll. We could do a LOT worse. We are also lucky, in another more important sense, that 33SS is here to help keep it real. I often find myself discussing unicorns and werewolves mating to create amazing furry, clawed horses with scary teeth and a giant horn. Or other unrealistic things like a successful Republican candidate for the 2012 Presidential Election. But man 33SS is here to lay the smackdown on our candy asses and make sure it is kept real at all times.

This originaly stemmed from the 2008 Cal Coaches Tour. Coach Montgomery and Coach Tedford met people at the Back40 Grill in Pleasant Hill, CA for food and a Q+A. All of CGB West went there. Afterwards, CBKWit and TwistNHook approached Coach Tedford for a photo and chatted for a second. The rest is history. Awkward, awkward history: 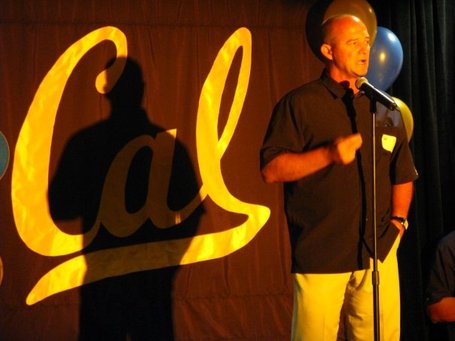 But in the few opportunities I've had to speak to him personally, he always seems so relaxed. Last time at the Cal FanFest he laughed when I told him how I spent the Holmoe years continuously in the fetal position.

This time I managed to get him to mock me to my face. Truly a crowning achievement. After the event, CBKWit and I went up to snap a photo with him. The people in front of us seemed all rich and powerful with their suits and male pattern baldness. Being young and poor and be-haired, I had the following exchange with Tedford (CBKWit's portion of the transcript has been redacted due to irrelevancy):

TwistNHook: "Sorry, coach, we haven't met you before because we aren't rich and powerful."

Tedford: "Why aren't you guys rich and powerful."

TwistNHook: "We're just out of college."

TwistNHook: "I'm an attorney. (AND THIS IS WHERE IT GETS MODERATELY INSANE!) I just tried to evict two people this morning."

Tedford: "Wow! What a guy" (BUT SARCASTICALLY!!! HE WAS BEING SARCASTIC!)

TwistNHook: "Yeah, I'm kind of an asshole." /slinks away

So, after that, my awkward conversation created the meme that I was an evil troll expanding my empire by evicting grandmothers from their hard-earned houses. Which, bee tee dubz, is completely true. Completely. 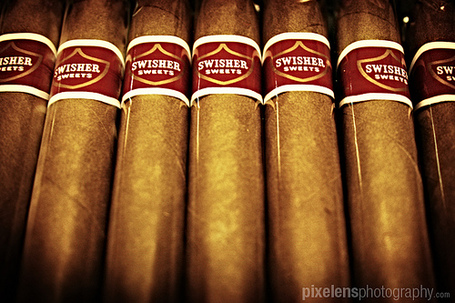 Who doesn’t fondly recall the first time their friend brought over some Swisher Sweets and replaced the tabacky with something a little more whacky? Those were some good times. Imagine the joy in Oaktown when the A’s drafted a young prospect by the name of Nick Swisher to the team, and he picked up the jersey #33…we all know #13 would have been far more appropriate.
Many a chronic fan was heard that day, saying…. sweeeeeeeet.

But this isn’t about Nick Swisher, or the whacky tabacky…this is about the lurker known as 33SwisherSweet, a man so powerful he only posts every so often when he feels compelled to correct our naïve way of thinking. 33SS is not a gentle man, for he lives by the philosophy “walk tall and carry a big stick”…only he won’t hesitate to beat you upside the head with said stick if you say something that doesn’t sit well with him.

To understand him is to truly love him…and so it is with 33SS. One day he is particularly ignitable and wants to call dballisloose out to the parking lot for a proper introduction to his bat, and the next, he comes up with a profound and sensitive comment about Derek Fisher’s daughter: “making fun of his daughter is NOT cool. Period.” Wow, how sweet 33SS is! Who would have thought that 33SS would be the patron saint of sick children? He could give the Dos Equis spokesman a run for his money, in a most EPIC way. Do we love him? Yes. Is he a dick? Most certainly. He is....the most epically lovable dick alive