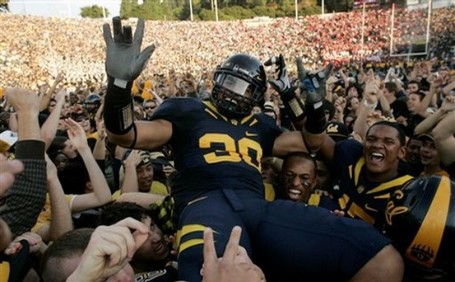 The Daily Cal had a nice write-up on Cal linebacker Mychal Kendricks.  As I was reading it, something really popped out at me:

And for his final personal blessing, Williams grabbed freshman linebacker Mychal Kendricks, looked him straight in the eye and told him this: You have the potential to be the best linebacker ever to come out of Berkeley.

Why does this pop out to me?

Well, I grew up playing a musical instrument.  It was a hobby.  I took some private lessons.  I was alright.  I made a few county honor bands but I was never good enough to make state honor bands.  That experience learning a music instrument helped me gauge the talent of other musicians.  For example, if someone else played the same instrument I did and I listened to them play for even a minute, I could tell how good of a player they were.  If I listened to them longer, got to know how much effort they put into their trade, and how much desire they had to get better, I could gauge how much potential that person had on becoming better as well as how good they could be in the future - such as whether they were good enough to be a professional musician.

This same idea applies to all other trades including sports.  So when I hear a player go out of his way to say something like "you can be the next greatest player," it really means something.

So in case you missed it, Mychal Kendricks may be our next greatest.  The players told us so.  And I think you ought to believe them.

What do you think Mychal Kendricks' chances are at being an NFL talent?  Although we are not privy to day to day practices to evaluate the players, whom else do you think has the chance to be The Next Greatest?