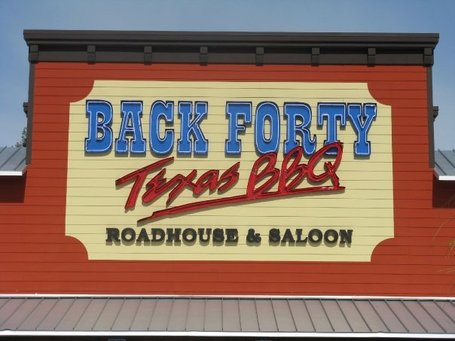 ragnarok:  Last year, Cal Athletics debuted the Coaches Tour, a series of meet&greet/Q&A sessions with Football Head Coach Jeff Tedford, Basketball Head Coach Mike Montgomery, Athletic Director Sandy Barbour, and perhaps a guest appearance by another coach or two.  We were there last year, and as you'd expect from such a winning formula (Tedford + Monty + Sandy + free BBQ = AWESOME!), we had a great time, and learned some interesting tidbits as well.

Thus, when the 2009 Tour dates were announced, it was a no-brainer that the CGB crew would make it out to at least one of these dates.  Let me tell you, we were not disappointed.  The BBQ was just as tasty and Monty's wit was just as sharp as last year.  Here's how things went down:

TwistNHook:  I got there at about 4:45PM.  Before Tedford! 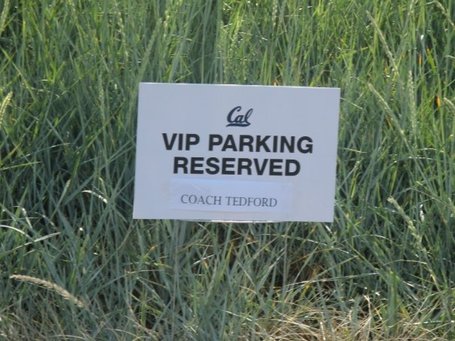 The place was packed, but that was just because they didn't let people in early.  So, a huge line formed in a smallish area.  I think there were fewer people there this year.  Most likely due to the fact that it cost 20 bucks as compared to zero last year. 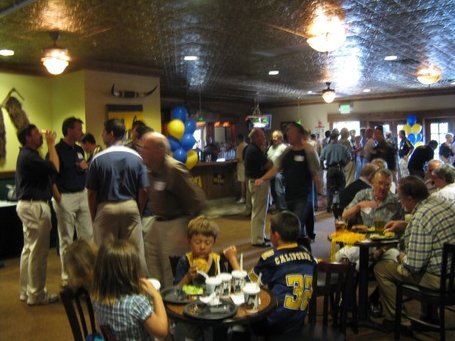 But it was STILL really popular.  Hell, it was so popular that opposing coaches were showing up: 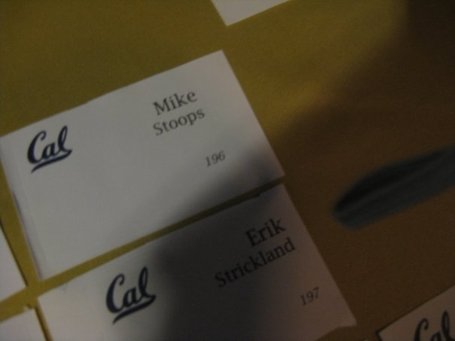 Plus, they had a free DVD of the 2008 highlights.  Is it up online on YouTube or something?  We're working to get it up there.  I might mail it off to Danzig's celestial kingdom for him to get it up.

Hydro and I quickly ran over to grab some food.  Hot dogs.  Slider-style burgers.  Soon, we were joined by Calnet and PaleoDan.  Then, Rags showed up with AndBears and OskiWeeWee not too far behind.  While people were milling about, Sandy Barbour got up on stage to announce that Cal Women's Tennis had defeated Notre Dame to go to the National Finals against Duke.  Well, that's good!  She was leaving the next morning at 6 AM to fly out to Texas to watch it.  Whenever a Cal sport is going for a National Title, she is there.  That's the sign of a great AD!

ragnarok:  It's the sign of a great athletic program that our teams are playing for national championships so that Sandy has the opportunity to fly out and see them.  If memory serves me, didn't she leave the morning after last year's event to go see a team compete for a National Title?  Was that also Women's Tennis? 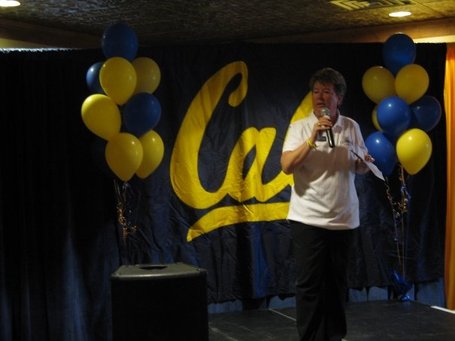 TwistNHook:  Given my extreme lack of women's tennis knowledge, I'll defer to you on that question.

In any case, they had a side mock-up of the planned Memorial Stadium renovations for the West Side of the bowl: 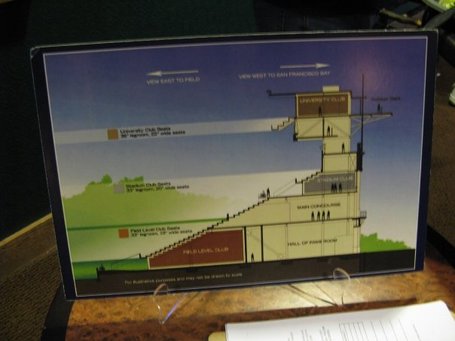 ragnarok:  Yeah, and they also had some demo models of the new seats that they're going to be installing in these premium donor sections of the west side.  I copped a squat in one of them, and let me tell you, they are swanky!

TwistNHook:  Then, it was time for the speeches to begin.  First, it was announced that somebody had brought their silver Lexus to the valet but accidentally taken their keys.  Monty joked that it couldn't have been him, because he isn't paid well enough to own a Lexus.  Remember this story for later!

Sandy was back up to give an overall picture of Cal sports: 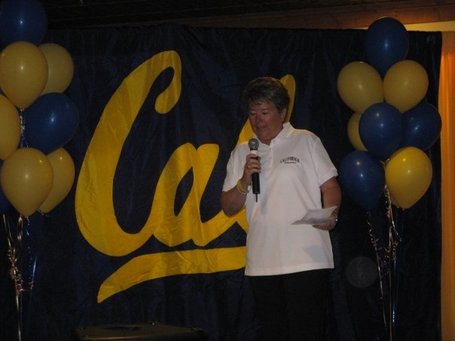 Things are good, it would seem.  She went through all the different sports and many of them are doing well.  Swimming kicking butt.  Track doing great.  Crew winning left and right.  Some other assistant coaches were there, such as Jay John (who may or may not be the evil twin version of Supreme Court Justice John Jay) and this one girl who I swear I went to high school with.

Sandy noted that every sport hit the mark in the APR.  That the graduation numbers are doing great.  She said that Cal was just one of 11 schools in the country to play in both a bowl game, and in both the men's and women's NCAA tournaments, and of those 11, just 2 finished in the top 10 in the NACTA Director's Cup:  Cal and Texas.  Big, big, BIG cheers for that.  Sandy is a very personable speaker.  She is funny.  She gave credit where credit was due.  She joked about how she didn't have to talk about judges and injunctions and trees anymore.  BIG cheer for that!  Hallellujah!

ragnarok:  One other interesting item that Sandy mentioned was that while Football and Men's Basketball are still the two big revenue sports that fund the rest of Cal Athletics, Women's Basketball is getting close to turning a profit, too!  The team will be young next year, but with a large (7 member) recruiting class that is ranked anywhere from 1st to 3rd nationally, they are going to be very, very talented, and the future of Cal Women's Basketball is bright indeed.

TwistNHook:  The first coach to speak was the Women's Swimming Coach, Teri McKeever: 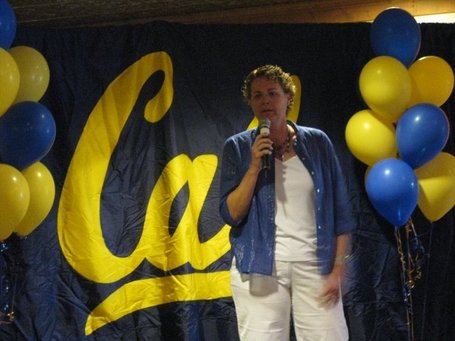 Women's Swimming, if you weren't aware, won the National Championship this year.  Here is a video of them celebrating, including inducing Sandy to jump into the pool with them.

Coach McKeever made it sound like the National Title was very unexpected.  Like she just looked up before the final race and realized "Wow, we are winning."  Apparently, the National Championship came down to the final race when Cal was just a point or so ahead of Georgia.  But noted superstar Dana Vollmer lead the team to victory!  Coach McKeever spoke about how she almost ruined the championship with some sort of coaching move.  To be honest, my knowledge of swimming was not sufficient that I could follow completely.  I think she raced some people in the semis that nearly didn't get Cal to the finals, but I'm not entirely sure.  She seemed very humble.

It was noted that she swam at USC.  As a family of McKeevers that swam at USC.  They offered her a job to coach their team.  But she turned it down to stay at Cal.  Now, that's impressive!

ragnarok:  Yeah, Sandy Barbour has not only done a great job hiring new coaches at Cal, but she's been very successful at retaining the successful coaches that we already have on staff.  Keeping Tedford and Joanne Boyle when other schools came calling was obviously huge, but it looks like keeping McKeever away from her alma mater was another big coup.

TwistNHook:  Next up was Coach Tedford.  Last year he spoke last.  I wonder why they switched him with Coach Montgomery.  Perhaps because Coach Tedford, while an engaging speaker, tends to give the coachy answers as compared to Montgomery, who shoots from the hip.  Then again, Coach Tedford did make fun of Monty a bit:

Coach Tedford praised his athletes for their academics.  He noted that they are the #2 Pac-10 team for the APR and had the most All Academic players in the Pac-10.

In specific, he said that Alex Mack was one of his favorite players, especially for the academics.  He said that they were very excited when Alex Mack won the Draddy award (the academic Heisman).  He actually made a slight reveal when he said he was very happy Mack returned for his senior season, partially because Mack would help repair some chemistry that had "fizzled" the year before.  Nothing new, but interesting to hear Coach Tedford himself admit it.

He started to talk about individual players.  Jahvid had a nice and productive spring.  Riley also had a nice spring.  As did Beau Sweeney.  Mansion, he said, really "stepped it up."  He said he'll name a starter as he gets closer to Fall Camp.

He spoke highly of Bryan Anger, which produced a big cheer.  He joked how concerned he was that people were cheering for the punter! 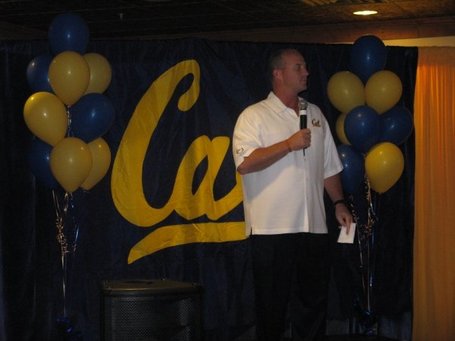 Then, he started to complement us.  Yay for us!  He said 3 out of the last 5 seasons, Cal has been undefeated at home.  We've only lost, IIRC, to OSU and USC over the past half decade at home.  So, that's pretty impressive.

HydroTech:  Woah, woah, woah, slow down there, Twist.  Give somebody else a chance to talk.  You are missing a lot of stuff.  Like when Tedford said Miami had a lot of tradition and that upon seeing the Miami players before the game he said they were "good looking guys" and the Bears were in for a "long night."

He spoke on next year's schedule, too.  Tedford said this year the schedule is more in our favor although still a difficult schedule.  He mentioned the fact that we'll get USC early this year and how they are changing QBs.

Further, Tedford expressed his pride in Alex Mack for winning the Draddy award and for coming back for all the right reasons.  Tedford said that throughout spring ball he was hoping to sustain no injuries.  Tedford said there is a lot of noise outside of his office.  And he was happy that it wasn't people banging drums or yelling.

ragnarok:  Yeah, the sound of heavy machinery must be a beautiful sound for him to hear.  Compared to last year's event, Tedford just seemed so relieved to finally be moving forward on the SAHPC, to not have any more hippies in trees, and to finally be able to really sell recruits on the future, and not just on dreams on paper.  He also was quite relieved that his team made it through Spring Ball relatively unscathed (I think Tad Smith was the only major injury sustained, and Tad is expected to be ready to play come Fall Camp.

Anyway, we've got a lot more to talk about at this event, including Mike Montgomery's speech, the Q+A session, and some great tidbits from the end of the event.  We'll continue in Part II soon.