This is the 7 v. 10 matchup. Carp's Armored Dog versus the PC name Rags and a Dolphin. Read the information behind the fold and then vote in the poll.

So, which animal moves on to take on Danzig. Which of these mighty beasts could be in a position to knock our resident Patron Saint Of Awesomeness off the ladder?

A relatively new meme, this one has been rising fast. Carp's armored dog stems from this photo of carp tailgating before last year's torrential Oregon game. 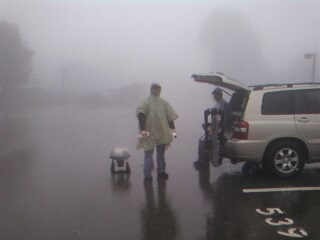 An awesome photo by itself, but it was about to get even more awesome with the following exchange:

/*yellow fever*: That's an awesome looking dog. Er, that is a dog, right?

*carp*: In my hand? we had cheese stuffed jalapenos and baby back ribs. I think that was just foil that was about to be thrown away. We got the BBQ lit in the monsoon with copious amounts of lighter fluid.

*yellow fever*: I meant the small living creature on your left.

*yellow fever*: Oh, now I see it. Before I thought it was like...a little armored dog. Which would have been awesome./

Yeah, it really would have been awesome. And voilà, a meme was born! Because, you know, what could be more awesome than this? 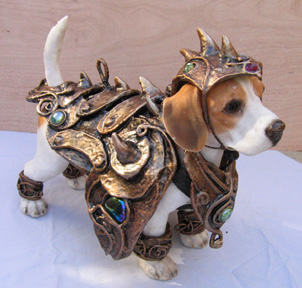 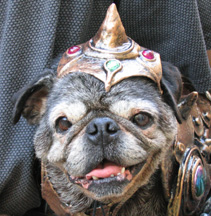 Rags Fucked A Dolphin (10) via Maharg

Some people are into some kinky stuff. We know that Rishi is into bashing marriage and avoiding contact with women. We know that Twist is into reading Twilight and waiting for his Edward. Andbears, you can stop reading here. Ragnarok is a man with tastes that none of us knew. Well, that’s not entirely true. Rags is a man with tastes that only Rishi knew. Once upon a time, we were having an innocent debate about the Die Hard series and Rags introduced a story of his development as a young man, describing the events of his first kiss. (Twist Edit: Go read that whole sub-thread, its classic). Naturally, the CGB community respected the privacy of Rags and didn’t push for more description of the experience, the female in question, or for discussions of the merits of each Die Hard film. The previous statement is a bold faced lie. Rags was quick to try and downplay any significance and tried to stop talking about the wondrous moment of bliss he shared during Die Hard (actually Die Hard With a Vengeance), but the questions and demands of CGB were too much. He began faltering in responses and it wasn’t long until none of us believed that the female in question was actually a human. Rishi was the only of us to have the gall to push for a conclusion of the story from Rags "So finish the story then or she was really a dolphin." At this point, Rags got brought off topic and began considering the possibilities, never to finish the story. To this day, we don’t know the full background of Rags aquatic sexual exploits, but we do have this description provided by Rishi in the original thread:

Rags: You want to kiss me?

Rags: Mm… this is so good. Better than twist!

Rags: Uh oh, I think I killed another one.

It would later be suggested (by Rags) that not only was it a dolphin, but it was a 14 year old Taiwanese pirate dolphin. CGB: Where Pirate Dolphins Happen.