Well, I meant to do a spring depth chart post, but then culinary school finals ambushed me. In the mean time, fellow Cal Football blogger Ken Crawford over at Excuse Me For My Voice beat me to the punch. Nevertheless, I'll continue on with this post despite my tardiness.

Here are my thoughts regarding the 2009 Cal Football post-Spring ball depth chart (the depth chart is available to view here):

No QB named the clear starter. 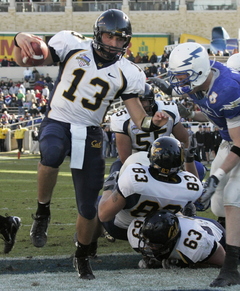 What does this tell me? The QB job is still pretty wide open. However, Riley is listed at the top, followed by Mansion then Sweeney. What does this tell me? This is the tentative standings between the three QBs. What else can be inferred from the depth chart? Well, it looks like experience is definitely giving Riley and edge over Mansion, likewise Mansion's (albeit limited) experience is giving him a slight advantage over Sweeney. ESPN writer Ted Miller put it pretty accurately when he said that Riley is the clear front-runner but he could easily lose his job too.

Does Tedford need to name a QB now? No. I've perused other Cal sports boards and I've heard some talk of how Tedford has lost his mind by not naming a starter. Quite frankly, that's straight silly talk. Naming a starter now accomplishes very little. At the most, it may instill some confidence into the named starter. However, naming a starter now, this early, will breed complacency. The starter won't push himself as hard as he would when he knows his job is at risk. The backups won't push themselves as hard when they know they can't win the job. Furthermore, naming a starter now, after spring ball accomplishes nothing. Some people think that naming a starter now will allow the starting QB to work on his timing with his WRs. However, this really isn't true. Right now it's summer. The coaches can't work with the players. The players are conditioning and don't really have rigidly structured practices. During the summer the players will get together and practice among themselves but not all players are here during the summer. Some are in school, some are home. With as much as 1/2 the team gone during summer, and the players having mildly organized practices (as opposed to highly structured fall camp practices) are they really going to get a lot of quality reps together? No. In other words, a "starting" QB really won't do much else differently than a non-starting QB. So why name a guy a starter and just have him get complacent?

Finally, I think some Cal fans have been complaining that USC and Pete Carroll named a starter prior to their spring game and thus Tedford should be able to do it too. Well, Tedford pretty much did. Riley was essentially the starter for our spring game since he worked with the first team. Does Tedford need to make a public announcement so it's official?

The most compelling reason why Tedford hasn't named a starter is because with all of Cal's QB problems last year, Tedford wants the most information possible before he makes his decision. Naming a starter now, without seeing the QBs' performances during fall camp (the more important camp), would be premature.

The Battle for Flanker

In the Emerald Bowl, Jeremy Ross played exclusively as Cal's flanker WR in base personnel. Now the depth chart is showing Nyan Boateng in that spot. Perhaps the senior finally showed enough to earn that top spot? It's still early but it's possible there could be an upset special and Ross wins it back.

The Battle for Split End

Towards the end of last season, Verran Tucker played split end WR almost exclusively. With all that experience on the field you'd think he'd be an easy write-in for the starting spot at split end again. I guess not. Sophomore Marvin Jones, with little game experience, is at that top split end spot. Again, it's still early, but a seasoned WR with lots of starting experience loses his starting spot to another player who was mostly injured all of last year? Either Tucker is slipping or Jones is that good.

This is a fairly important question. Cal's top 3 WRs get the majority of the snaps on the field - perhaps upward of 90%. So who is it going to be? Tucker, Ross, and Boateng have the most experience so you might think it'd be them. However, we all saw sophomore Alex Lagemann blow up in spring ball. Right now he's penciled in at the #1 slot position. When Cal goes to its 3 WR sets (11 personnel), if we assume the top players at each WR position see the field then the top three will be Boateng, Jones, and Lagemann. That leaves out experienced WRs Jeremy Ross, and Verran Tucker - and puts the more inexperienced Jones and Lagemann on the field. Do we want more inexperienced WRs on the field again another year? Is the talent that Jones and Lagemann bring to the field worth more than the experience that Ross and Tucker bring? Cal could have a Rose Bowl season next year if its passing game comes together (and assuming the running game stays dominant and the same goes for the defense). I'm not exactly sure that having more inexperienced players on the field is the greatest way to get that passing to improve. The alternative is that Cal adopts some sort of 5 WR rotation with all the aforementioned players rotate in frequently. It will be interesting to see what happens with the WR situation when fall camp ends. 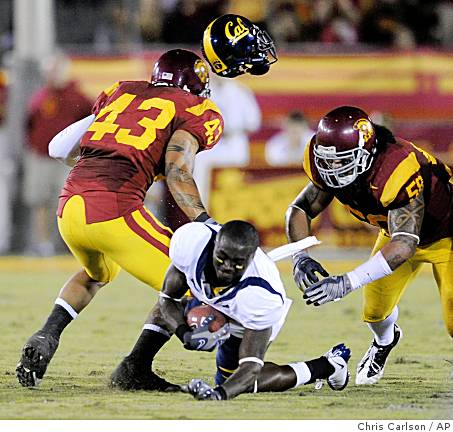 Hagan Locks Up A Starting Spot From the Classroom

Darian Hagan has been out most of the spring working on academics. Most of us figured Chris Conte had a chance to steal a starting spot. It doesn't look like that is going to happen. Frankly, I'm not surprised. While Conte has shown improvements from his shaky freshman year, I still think Hagan has superior coverage skills as well as being better in run support too. The fact that Hagan still sits #1 at his CB spot despite being mostly MIA speaks volumes about what the coaching staff thinks of him.

Ted Miller of ESPN has been saying the secondary might be the best in the Pac-10. Well, he might be right. We all know Syd'Quan Thompson is a stud and an NFL talent. We all know Darian Hagan is great too (he's got two years remaining too!). Actually, I think Hagan is underrated and should have made Miller's Top-30 Players in the Pac-10 list. And with Sean Cattouse coming on strong and pushing Brett Johnson, and Marcus Ezeff being his stud self, our secondary could be wicked good again. Of course, let's not forget that a secondary's success also relies on the linebackers, and defensive line too.

Tad Smith Locks Up A Starting Spot From the Training Room

So Tad Smith breaks his Scapula, looks to be out perhaps through opening kickoff and set to lose his presumed starting spot to Anthony Miller but then he's still #1. Hmm... okay. I think it's safe to say that unless something crazy happens in the fall camp that he's still going to be #1. 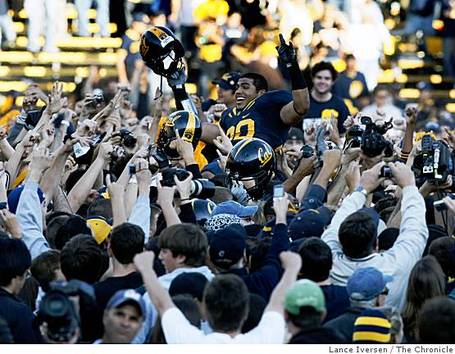 Mychal Kendricks to Will and Devin Bishop to Buck