When we left off last, some more Cal B-Ball players were arriving.  Max Zhang had made his instantly recognizable entrance.  And soon, Jorge Gutierrez showed up, looking dapper.

But first, another piece: 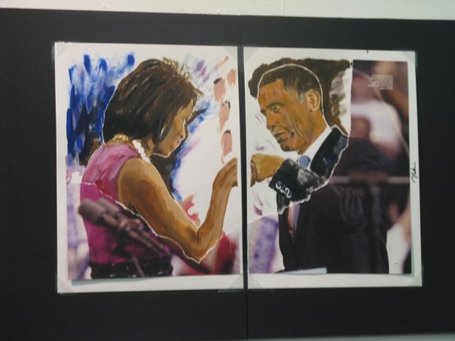 So, ya, Jorge showed up. 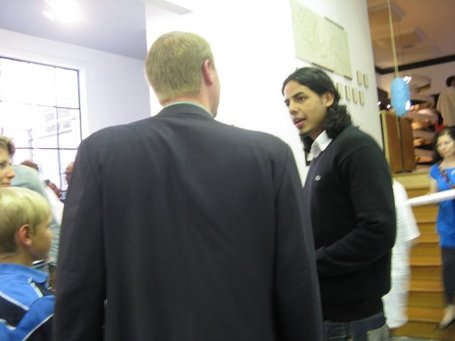 I asked Jorge if I could ask him a few questions.  I hadn't anticipated doing that, because I was focusing mostly on Jamal Boykin and Patrick Christopher.  I didn't have any questions planned, so I just did it off the top of my head.  And that.........can end poorly.

My first question was the very first concept that popped, for some inane reason, into my head: "You are a very important person who does a lot of important things.  What's the most important thing you do all day?"  I think first he took a look at me to figure if I was serious. 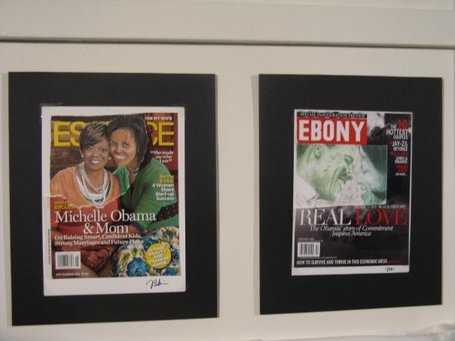 Determining that I was, he answered with something like "Hold people around me."  I think he meant enjoy time with his friends and family.  So, I responded "Hold them from what?  Like a chimpanzee attack or nuclear Armageddon?"

At that point Monty came over and started chatting with Jorge about another one of Jorge's coaches.  When that conversation was over, I told Jorge that I realized he was a busy man.  I told him I just had one more quick question.  Summoning every iota of skill remaining from 4 years of high school Spanish (and a solid 2 on the AP test), I asked him:  "Donde esta el bano?" 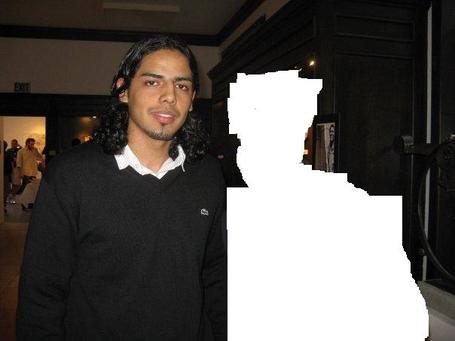 As previously mentioned, Monty was there.  I didn't quite snap a solid shot of him.  Although, here he is chatting with Jamal Boykin: 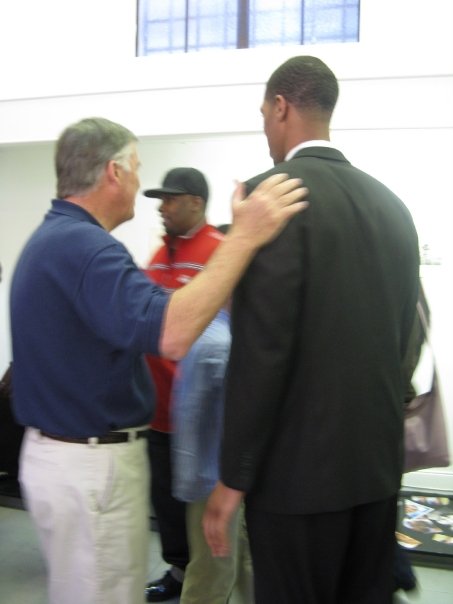 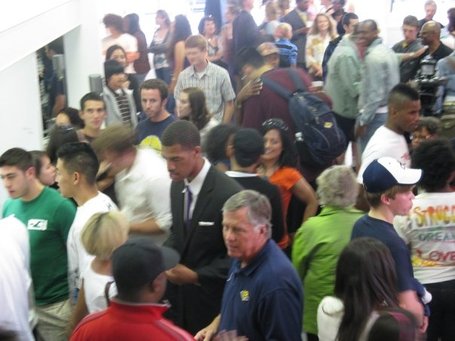 Bee Tee Dubz, it is tough to see there, because he is bending over to hug somebody shorter than him (i.e. anybody), but Max Zhang REALLY stands out in crowds.  To wit: 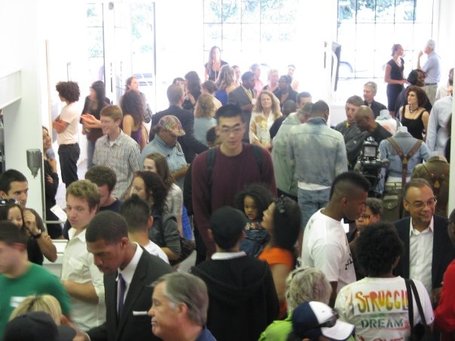 You can see the place was starting to fill up as we got closer to the poetry reading. The players were there to support their teammates: 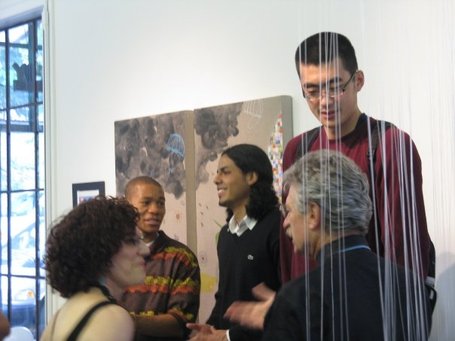 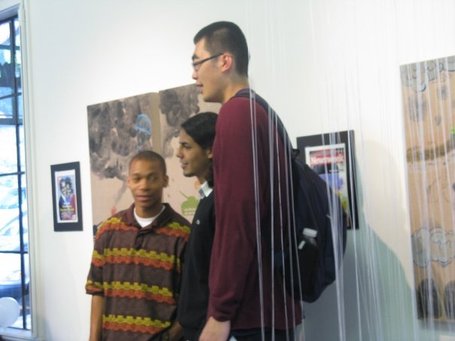 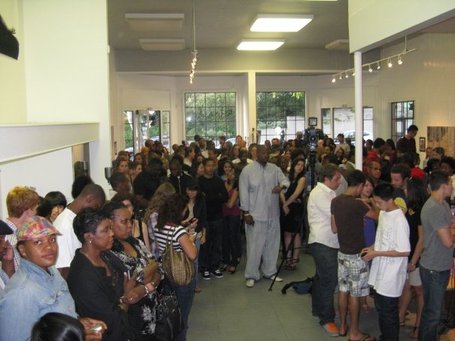 The place was packed and we were ready to go. 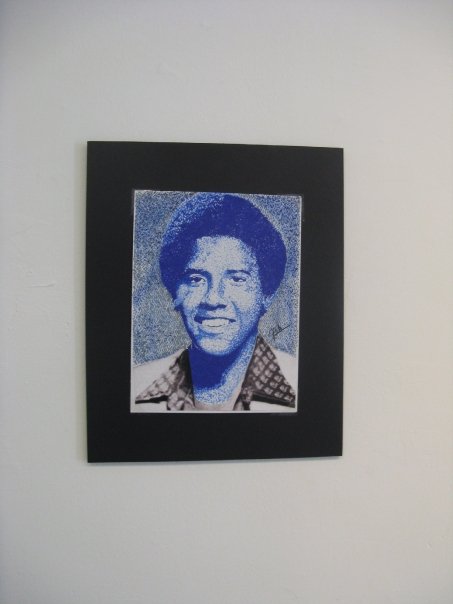 A gentleman who I believe was named Nican Robinson was doing the introductions.  He spoke of how it was not just Barack Obama bringing change, but also young people, such as Jamal Boykin and Patrick Christopher. It was pretty funny: 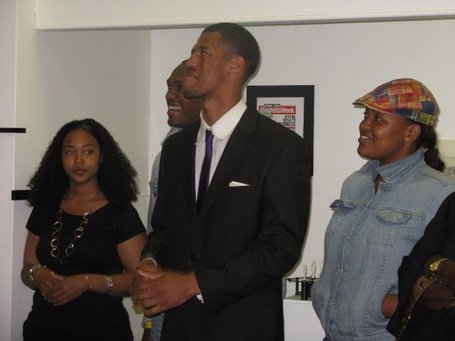 He introduced a singer, whose name I believe was Monique Barber.  She had a very lovely singing voice: 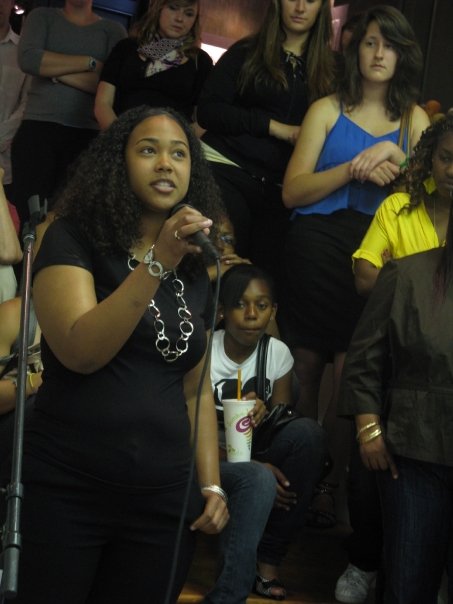 After she finished singing, Patrick Christopher came up to read his poetry: 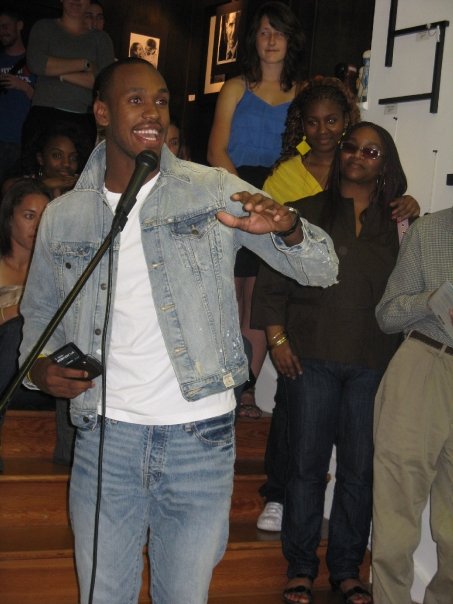 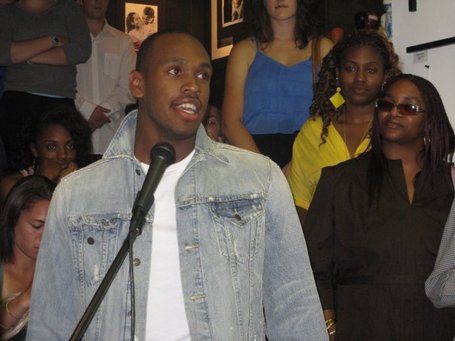 Here are some videos:

After he read his poems, he thanked his mother and sister, who are apparently these two women to the right here: 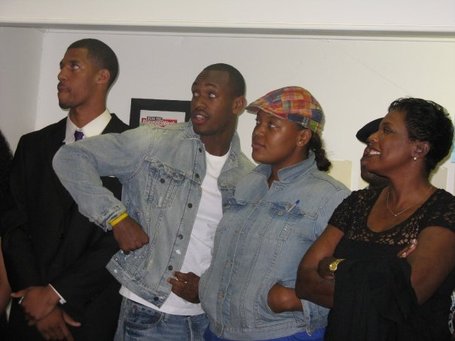 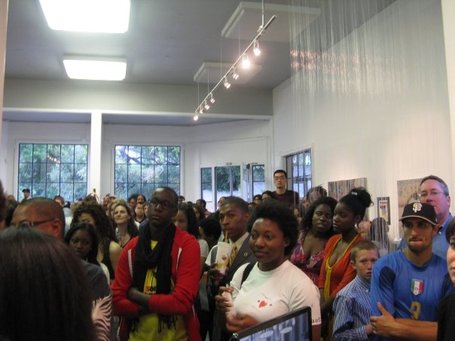 Then, Nican Robinson came back up to give a more personal introduction for Jamal Boykin.  Jamal Boykin and Patrick Christopher listened intently: 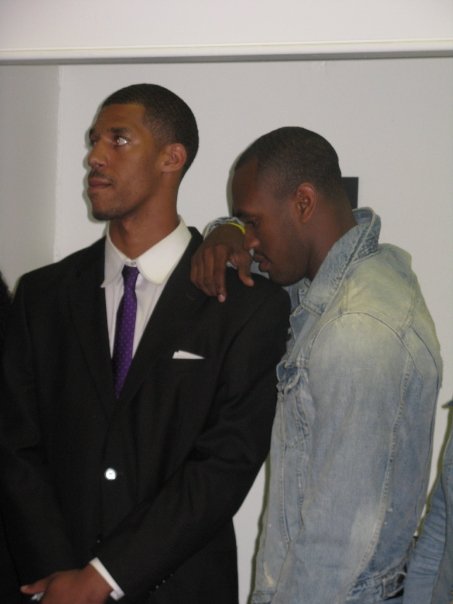 Then, Jamal Boykin came up to give a speech.  First, he thanked the two owners of the Alphonse Berber Gallery, Jessica Cox and Cameron Jackson. 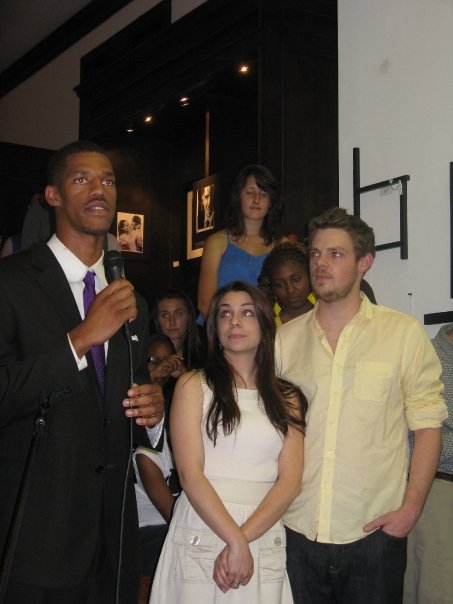 Then, he summoned the dark energies of the night.  Or, alternatively, managed to close his eyes at an inopportune time: 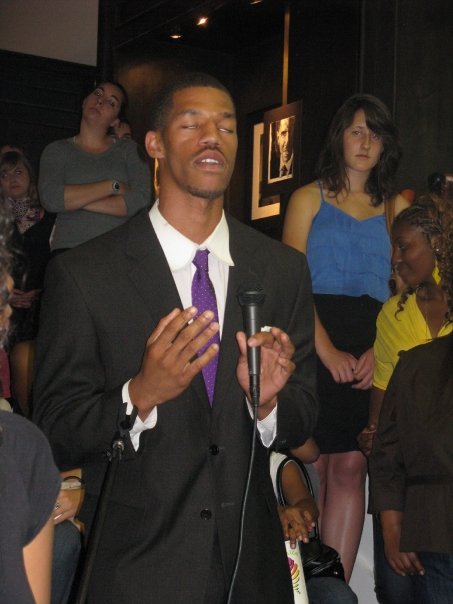 Here are some clips of his speech.  He reiterated the same points he had told me earlier.  About the material finding him spiritually.  And how it was a New Year's Resolution.  He added a funny story about how Craig Robinson found out about the art.  Unfortunately, I was not taping that story.  Basically, ABC and CBS did spots during Cal games about him and his art.  Craig Robinson (aka Brother In Law In Chief) found out about it and about a minute before one of the Cal-OSU games came right up to Jamal.  He shook his hand and said that he was really impressed with Jamal's art and hoped to get Barack Obama to come see some of it. 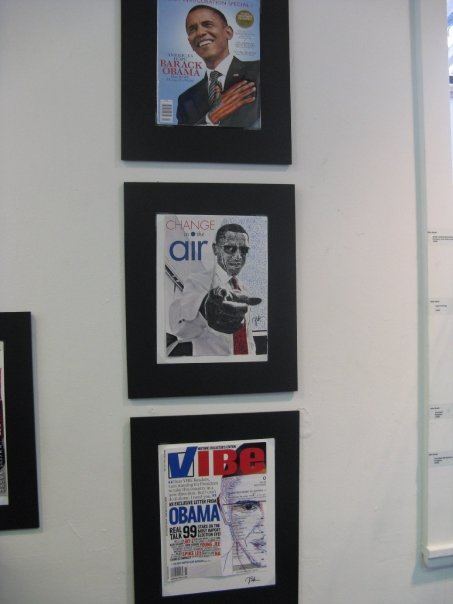 This freaked Jamal out incredibly and, given that we lost that game to OSU, makes one think that it might have been a strategic thing.  Well, if it was, your mind games worked, Mr. Robinson! 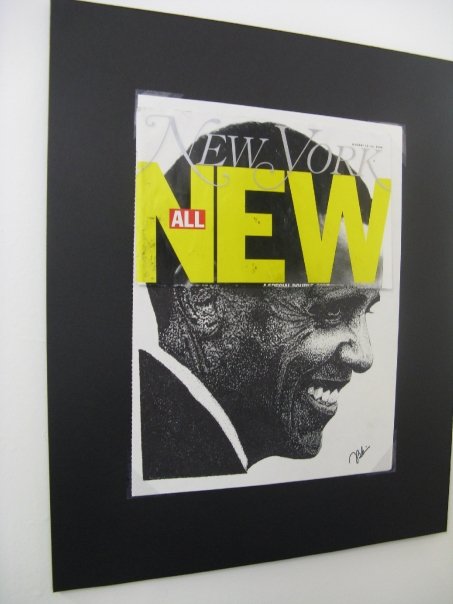 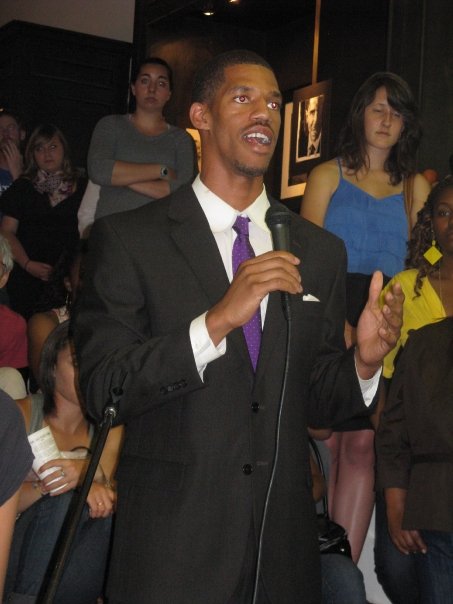 It was a very good speech that Jamal gave.  The event continued afterwards, although some people did leave. 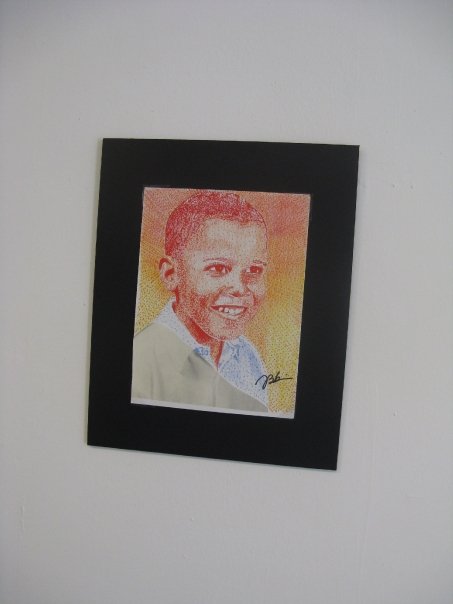 Although, then, I saw Jordan Wilkes arrive.  He also stands out in a crowd: 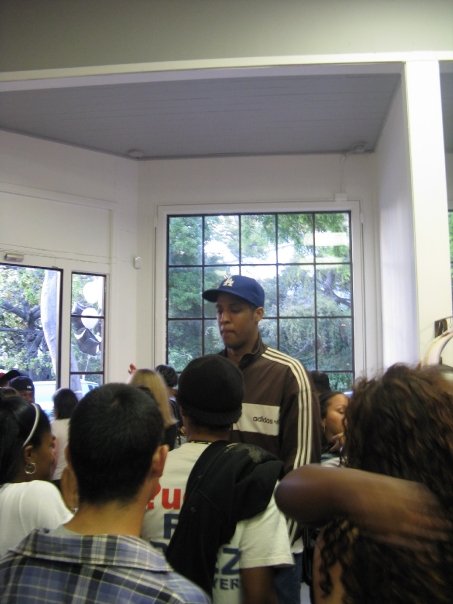 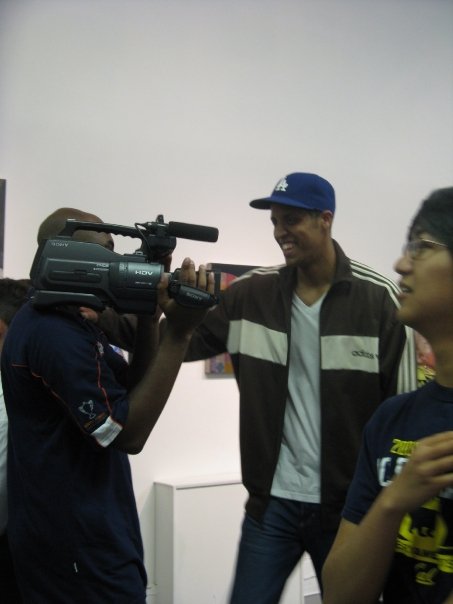 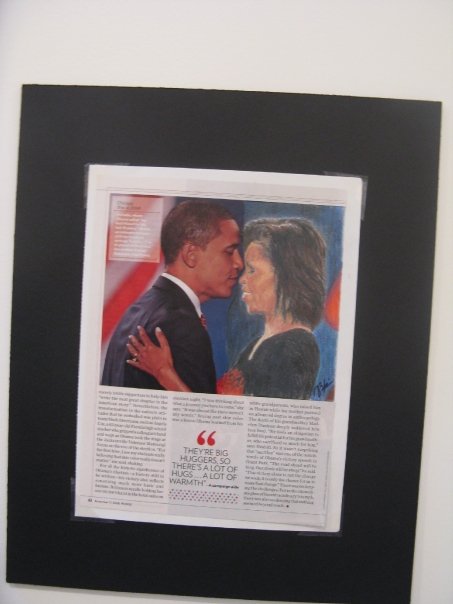 I also did an interview with the two co-owners, Cameron Jackson and Jessica Cox.  First, I spoke with Cameron Jackson.  He told me that it was, in fact, NOT spelled like Cam'ron, the R+B singer.  I asked him what made him decide to open an art gallery, especially during these economic times.  He said that he had been an art agent previously (and might still be, unsure) and had done some art shows in his home with Jessica Cox.  They are friendly with the CFO of Rasputin's and that gentleman told them that now was the time to take a risk.  You could get a great deal on renting a place.

I asked Jessica about how the show originally came together.  She told me that Jamal Boykin actually came to them.  He just came in one day and asked if they'd look at his art.  He just had them in his backpack.  She said that sometimes that can create an awkward situation, especially if the art is not very good.

However, she said that not only were the pieces good here, but that Jamal's energy was very strong.  I presume that means firstly that he was very excited and energetic about putting on a show.  But also, secondly, that his was not the usual energy around art.  The sports world and art world don't always collide.  Cameron Jackson mentioned how they hoped to expand people's interest in art by holding this show.

Jessica said that it took about 4 hours to put up the show that day.  The most difficult part was working to meld the current show with Jamal Boykin's show.  They wanted it to be coherent and not just seem thrown together.  In my opinion, they did a great job 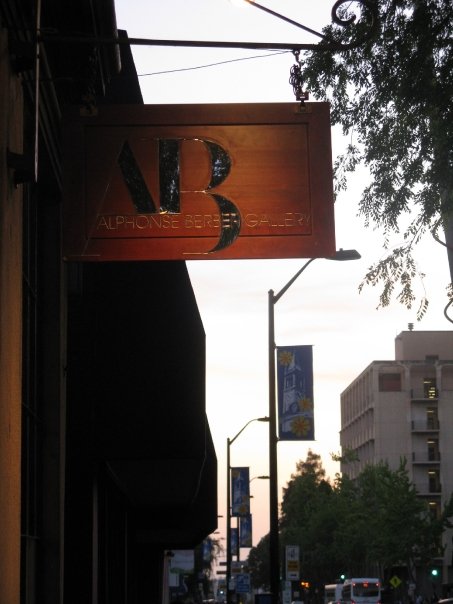 So, there you go.  A fun night.  With the Cal B-Ball team.  An interesting opportunity to see them from another angle.  GO BEARS!