Ok, here we have the 7 v. 10 matchup. Dice Wars v. Carp's Photos. Read the info behind the fold and then vote in the poll.

Here's another eclectic mix. Dice Wars, an addictive game. Versus Carp's never-ending love affair with scantily clad women. Both ultimately drive people away from this site. One is because they get addicted to Dice Wars, never eat or slept and then die at their computer. And the other is because they think Carp is objectifying women and misogynistic. Either way, let's try not to drive people away from here, OK? 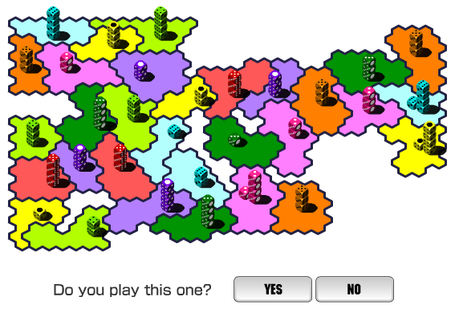 Dice Wars is an addicting flash game I found years ago, and have been spreading the word about ever since (basically Risk meets Solitaire, which seems like a contradiction). When discussions get annoying or stupid, I just insert a link to the game, usually via deceptive means (they think they're getting a youtube video of Nicole Scherzinger in a bikini and then "NOOO IT'S A TRAP!")

Why you should vote for it: So we can spread the word about Dice Wars Version 2.0, the multiplayer version: http://kdice.com. Now we can get addicted playing against each other!

Ordinarily, sweeping general policies are not made in response to the actions of just one man, but carp is no ordinary man. His penchant for posting photographs that could lead to unfortunate consequences should they be viewed at a place of business is legendary around these parts. Of course, complaints followed, and so it was decreed that all images of questionable suitability should not be posted directly into comments, but rather posted as links with the Not Safe For Work (NSFW) caveat applied. Thus, harmony was restored to CGB.

However, we are here today to celebrate carp and his tireless efforts to bring the CGB community the best in NSFW images that Al Gore's internet has to offer. From the 'Bama fan of the week' to his All-Conference Cheerleading Team, carp's NSFW images are legendary.

Now, I can't possibly link to all of carp's contributions, so I'll only repost a few links here. Believe me, there are many, many more. If you search for 'NSFW' in comments by carp, you get (to date) 136 search results. Outstanding, sir!