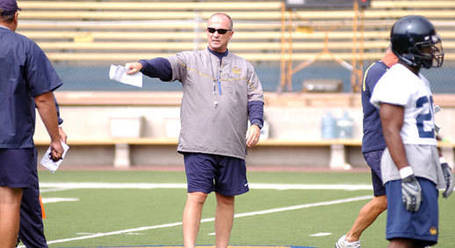 Here are a few quick thoughts of mine after reading the scrimmage reports...

Riley starting off 6/7 on passes sounds good.  But I wouldn't read too much into this considering he was also working with the top WRs from last year.  He also had the benefit of a more experienced offensive line to protect him.  Fellow Cal Football blogger Bears With Fangs has a nice post asking how long we're supposed to wait until a starting QB is named.  From the first practice report, it doesn't really sound like anybody is "pulling away," as the cliche goes, from the rest of the QBs.  Riley is probably the favorite to win the starting job, and he certainly has more experience than Mansion and Sweeney but that just puts him ahead of the other two QBs and not necessary meaning he's running away with the job.

Tedford also said he was working on "shortening" Riley's throwing motion.  Having a short throwing motion has always been a Tedford staple to obtain a quick release and also to prevent DBs from having more time to "read" the QB's arm.

This is unfortunate.  Tad Smith seemed set to be our #1 tight end.  This injury could keep him from playing a few games into the season, or at least prevent him from practicing which would limit his chances to be evaluated by the coaches and competing for the top two TE spots.

This TE injury reminds of me when former Cal TE Julian Arthur suffered a leg injury during fall camp which knocked him out of the lineup.  Many Cal players really felt for Arthur at the time, not only for his injury, but because he had positioned himself to be on the traveling squad that would go to Tennessee.  For many players, and especially those that aren't starters, football isn't just about playing football but also about having a chance to travel.  Those non-conference games across the country (Michigan State, Maryland, Tennessee, Illinois, etc.) are a chance for many players to travel to locations in the United States that they otherwise would never have a chance to go to on their own dime.

This is his best chance to re-assert himself as a starting CB.  With Hagan out to concentrate on academics, all eyes are on Conte.  Conte looked okay as a freshman, and had a few shining moments as a sophomore last year, but I still think Hagan is the favorite to win the starting CB spot opposite of Syd.  One thing Hagan has going for him is that he's wicked good in run support which gives him another edge over Conte.

BearInsider reports that QB Beau Sweeney ran for a touchdown on a QB bootleg (link, 12th paragraph).  Bootlegs have disappeared from the Cal playbook for many years.  I can't remember running bootlegs consistently since 2004 with Aaron Rodgers.  It will be interesting to see if we see more QB bootlegs in 2009.  With Riley's mobility, bootlegs are definitely an option, but Tedford will only run them if Riley shows he has the ability to also pass accurately on the run.  It is uncertain as to whether Mansion would have bootlegs called for him if he wins the starting job since Tedford has described Mansion as more of a traditional dropback pocket QB.

Contra Costa Times reporter Jonathan Okanes reported a while ago that the QBs were watching old film of former Cal QBs Kyle Boller and Aaron Rodgers to get "in tune with Tedford's offense."  This comment can be interpreted many ways but to me it sounds like as if Tedford might be hoping to return to a slightly more pro offense.  In other words, we might be seeing a slight shift back towards the offense we saw in the 2002-2005 seasons.

Last year, Cal used the I-Formation less than previous years.  Double TE sets were also used less.  In essence, Cal Football's offense has been using a 3rd WR more instead of a 2nd TE or fullback.  This has been a product of Tedford's evolution of the offense incorporating spread elements from Mike Dunbar.

Cal's offense from 2002-2005 used double TE sets (12 personnel), and the I-formation (21 personnel) a lot.  Watching film from the 2002-2004 seasons seems to hint at the idea that Tedford might be wishing to revert back slightly to a more pro offense.  This is not to say that it will be a completely pro offense again, but merely that the Cal Football offense will be moving a little bit more towards the "pro style" side of the pro/spread offense spectrum.

This also brings me to the function of TEs in the offense.  Gone from the glory days of Rodgers were the short TE passes over the middle.  Remember those days?  TEs would run little curls against the linebackers, find the seams (holes between zones), and sit.  Perhaps we'll be seeing more of that in 2009 since Tad Smith, and Anthony Miller's playing styles are more suited to that style of play rather than the deep down-field speed stretching-of-the-defense style that NFL-departed Cameron Morrah brought to the table.

Ever since that blog post from Trojan Football Analysis of one of the Cal coaches breaking down Cal's running game has circulated the internet, everyone and their mother now call Cal's rushing a "power rushing" attack.

I don't like calling Cal's rushing attack a "power rushing" attack.  The phrase is misleading to the lay football fan.

Is there something which Cal does to its offense which makes it a "power rushing" scheme rather than a regular rushing scheme?  In other words, does Cal have "regular runs" and "power runs?"  Does Cal hit the defenders harder on "power rushing" plays?  No, no, and... no.

The reason why Cal's rushing scheme is a "power rushing" attack is because Cal pulls the backside guard on run plays.  That is where the word "power" comes from.

Now, I heard people using the word "power rushing" attack last year (2008) and that's been bothering me because Cal didn't really run a "power rushing" scheme last year.  Rarely, did Cal ever pull the backside guard on its typical inside running plays (by "inside" I mean anything that's not a sweep or draw).  Instead, Cal used mostly man blocking without any pulling guards.  This change in running scheme is something I will cover in the summer.

So my point here is to raise people's awareness when they use the phrase "power run" and especially the word "power."  I think most people were just throwing that phrase around because they heard or read it somewhere but they really didn't know the meaning.  Now that we all know the meaning I'm hoping we can start using it correctly.