And we're back!  Smack dab in the middle of all the hot drills action.

As previously seen, the offensive players were working on catching the ball.  But they were not, I repeat, were not the only one.  I hope I'm not giving aid to our enemies with these revelations. 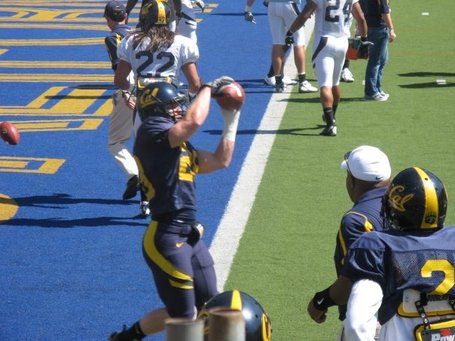 I forgot to add this part in and HydroTech reminded me.  We're pretty sure these two guys were Maryland spies.  We saw them one section over, intently writing stuff down.  They kept writing and writing and writing.  And then I snuck over and saw that they both had "I Heart Freidgen" scribbled all over their Trapper Keeper Binders.  Could we get Maryland to forfeit?  TEDFORD NEEDS TO KNOW! 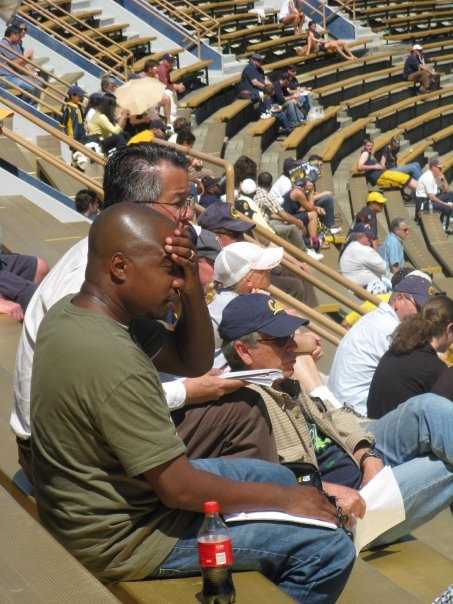 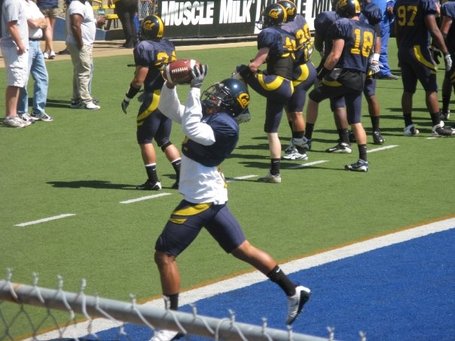 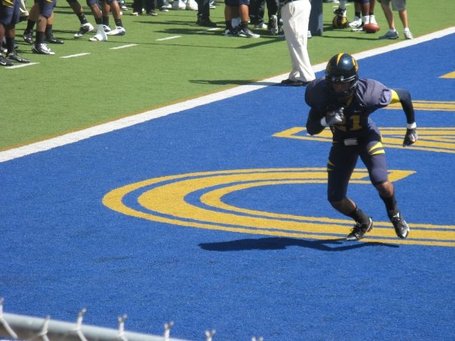 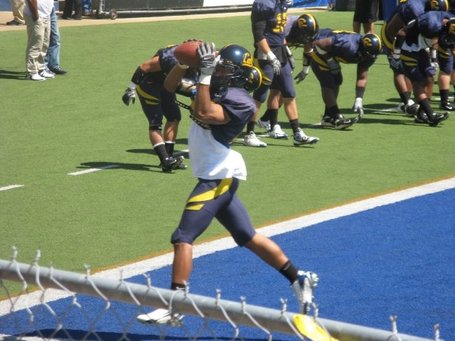 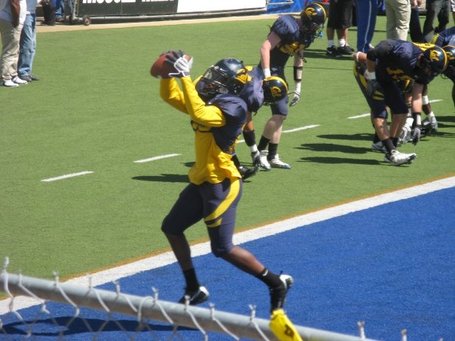 But sometimes you want to go for a batted ball. 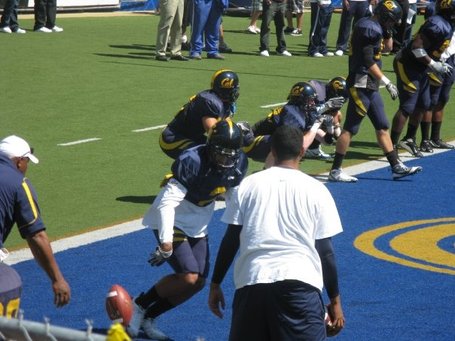 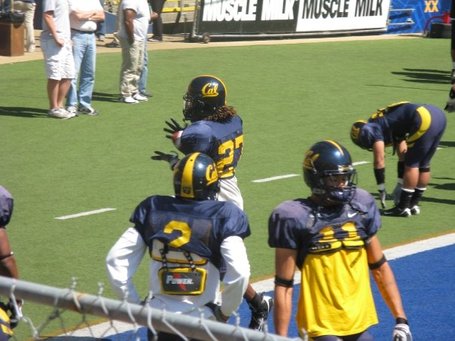 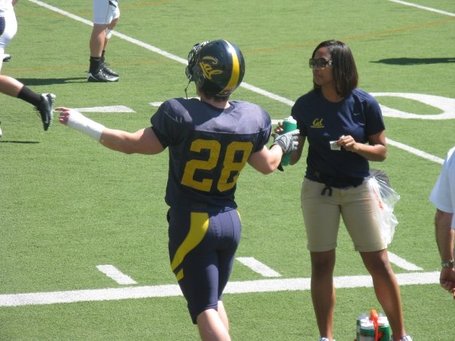 The offensive guys didn't stop to watch the defensive guys, though.  They were still at it. 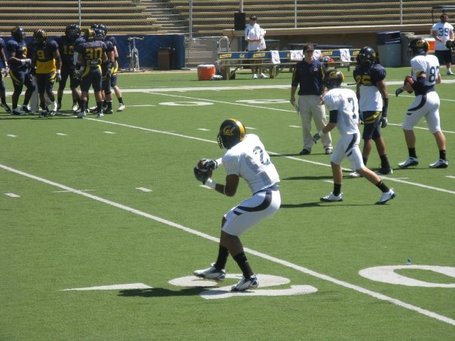 I guess they decided to bring their parties together! 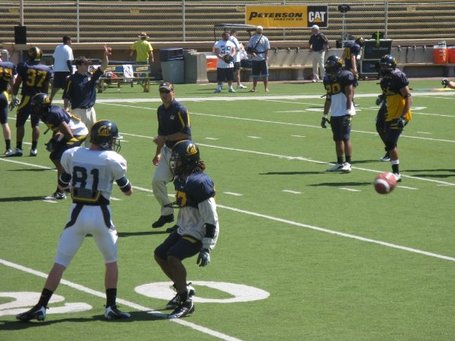 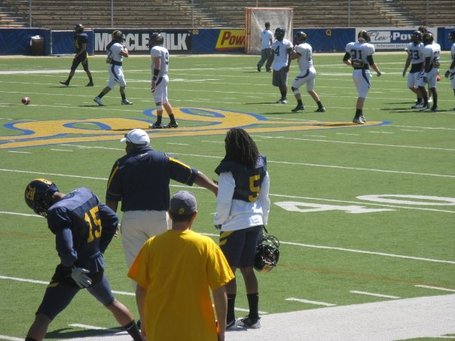 Syd'Quan, bee tee dubz, took a moment away from the drills to start doing stretches in the middle of the field.  He's quite limber. 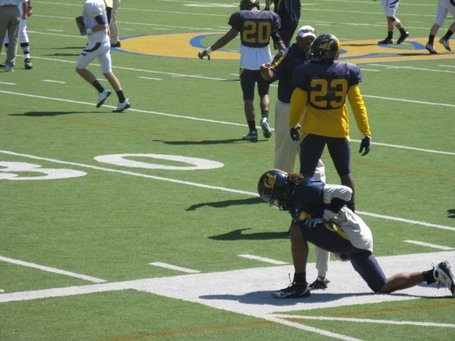 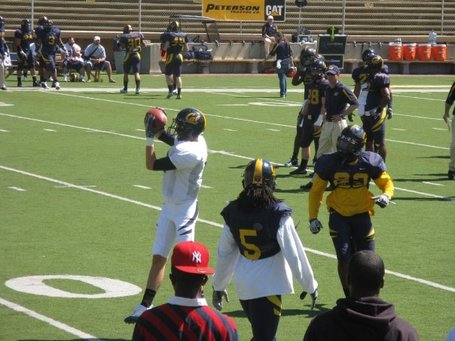 Soon, all the players were stretching. 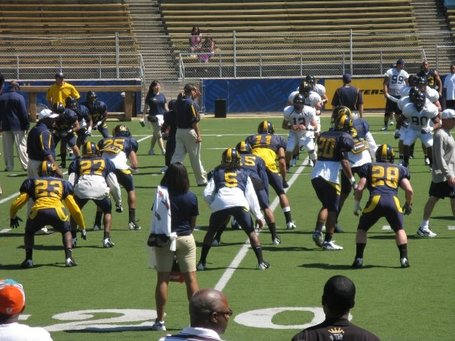 These photos are the last photos I have of any on-field action.  Why?  Well, I'll let Ragnarok explain, since his version is a lot more PG than mine would have been.

Cal Football (basically, Coach Tedford) wants to try and conceal as much information about formations, plays, etc. as he can. Obviously, stuff that he’s used in a game is available to opposing coaches across the country, so posting screenshots from games on this site is no big deal, but stuff from practices is not OK. Last year, we mistakenly thought that, because the Spring Game was an open practice, and anyone could attend (even, in theory, opposing coaches), whatever occurred during the open practice was fair game, and there would be no issue with posting such photos on our site. Cal Athletics was made aware of our photos, and we were informed that we were mistaken, and asked to take them down, which we promptly did.

The policy (as was explained to us last year) is that warmup shots are fine, as are photos of drills, so long as those drills don’t involve players from more than one position. Photos of scrimmage plays (especially those showing pre-snap formations) are a no-no. Going forward, we at CGB will try our best to adhere to this policy, not because we have to, but because Tedford and Cal Athletics have asked us to, and we will do everything we can to support Cal Athletics.

oh, and apparently, that policy has been relaxed this year, so you may see more interesting media coverage of the Spring Game out there.

So, based on a rule that they punished us with last year without warning and then changed again this year without notice, we are once again punished by having no photos to show you guys.  I figured there'd be no reason to take photos if I couldn't put them up.  I guess annoying all my friends on Facebook with yet another endless photo album just isn't a good enough reason.

But I did get some photos of other various things.

Work continues at the stadium! 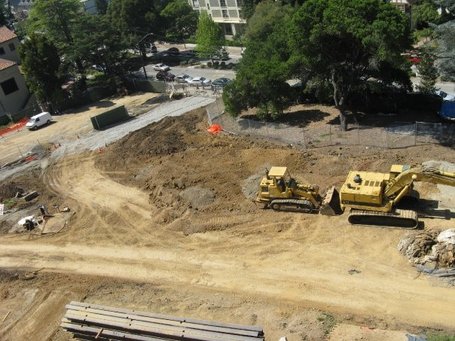 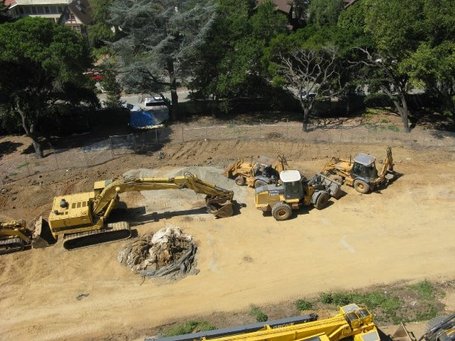 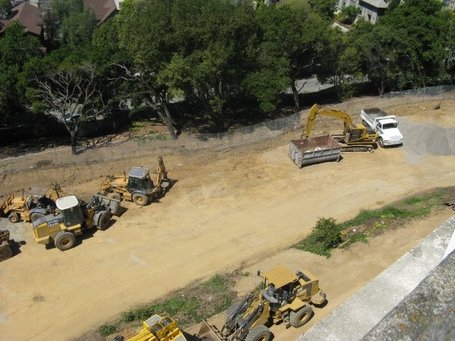 And hey, when in Rome: 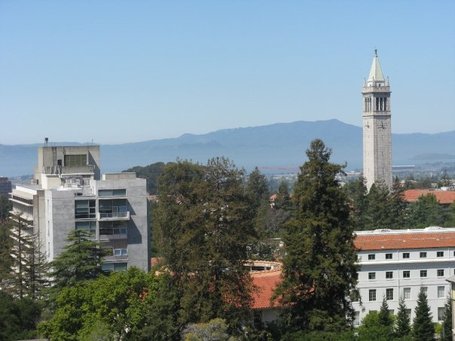 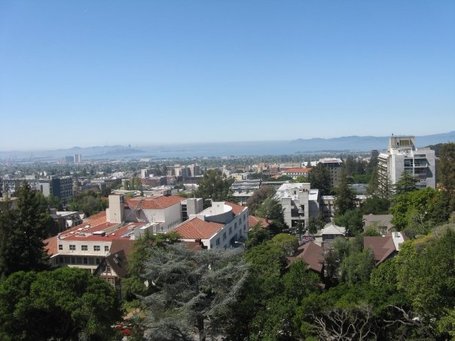 Once the game started, we settled into our little Blog Ghetto area.  And we noticed another SPY AMONGST US!!!!!!  It never ends!!! 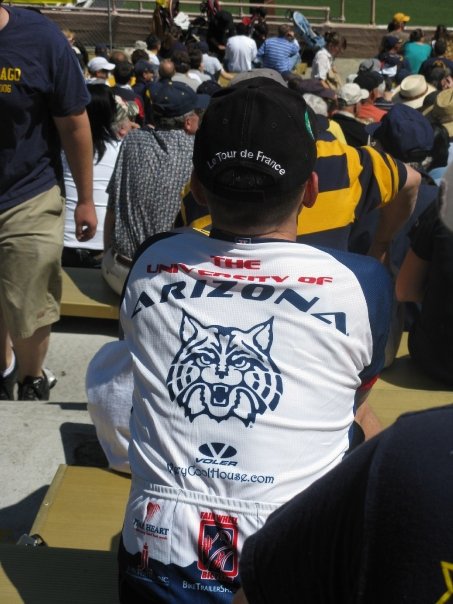 After the game was over, some players were milling about, answering questions.  Others came into the stands.  I caught Jonathan Okanes on his way down from the press box (where I was denied entrance!) and introduced myself.  I didn't want to keep him from his responsibilities as a journalist, so I kept the conversation short.  He seems like a nice guy.  Kenny Boy Crawford was there with his lovely family. His kids are so gorgeous, I want to steal a few and make them my own.  And the dude was Bears With Fangs rolled by.  So, it was like a big party!  Of nerds!  Who had taken a moment to leave their mother's basement to see a sporting event.  And discuss who was better, Kirk or Picard (Star Trek Pro Trip:  PICARD!) 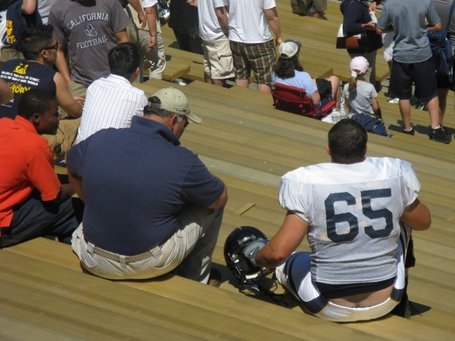 And lo and behold, who do I see meanding around the rugby game, but future (potential) first round draft pick, Alex Mack. 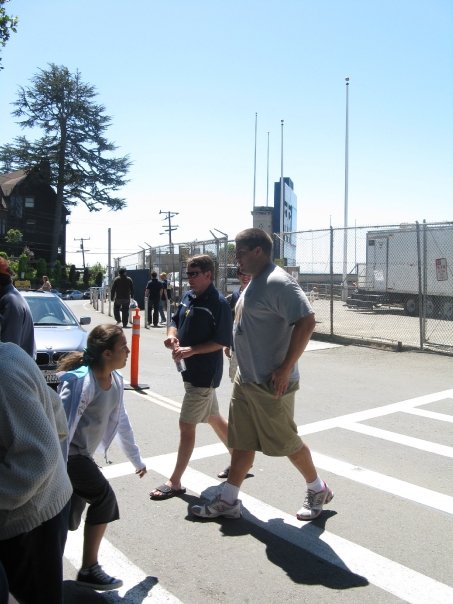 So, there you go.  A great time out!  And a teaser for the upcoming football season.  GO BEARS!