We thought we should go senior by senior and take a gander at their Cal career.  Some photos.  Some videos.  Some stats.  And if HydroTech has any personal stories of his time with the team, he'd share them.  We did Nate Longshore months ago, because Twist screwed up the scheduling.  Also, he's so dreamy!  And we just did Alex Mack. And, then, Will Ta'ufo'ou.  And then Jordan Kay.  And then Anthony Felder. And then we did Rulon Davis. Then, we did Tom Schneider.

Today, we do Cameron Morrah.

TwistNHook:  Although I don't believe Morrah is quite a senior, if HydroTech tells us to remember somebody, WE REMEMBER HIM!  So, let's get crackilackin' on Cameron Morrah.  What are my thoughts on Morrah?  Well, he was much more of an offensive threat than previous TEs who were more blocking focused.  Not to say that Morrah's blocking is bad, far from it.  And given our WR troubles this past year, he was perfectly placed to get a lot of action.  There were some problems with his hands at times, but overall he was a great pass-catching TE and will benefit many teams in the NFL.

Yellow Fever:  He struck me as a bit of the anti-Craig Stevens.  Which was great when Stevens was around, but not so great when he wasn't.  Still, it was nice to have a somewhat reliable pass catcher when the wide receiver corps was busy applying butter to their fingers in between plays.

Avinash: Our blocking did suffer without Stevens; when we faced a good pass rush or running D, our offense tended to bog down without that extra cover man to fortify the lines. Morrah just doesn't have the physique to be dominant on the LOS.

But catch? He can definitely catch.

TwistNHook:  You get a very small appreciation of the players from the FanFest.  So, who knows what Morrah really is like.  But at the FanFest, he was a very quiet and very shy player.  While others were very gregarious, he was more withdrawn.  He was not mean by any stretch of the imagination.  Just not quite as out-going as others.  I wonder if that ever relates to anything on the field.

HydroTech:  I don't have a particular story to tell about Cameron.  The reason why is because the guy never talked.  I swear, I don't think EVER heard him say even ONE word.  He was a quiet introverted guy.  I don't think he even spoke much, if at all, to the other TEs.  It wasn't that they weren't friends or they were on bad terms, but the guy just didn't speak. 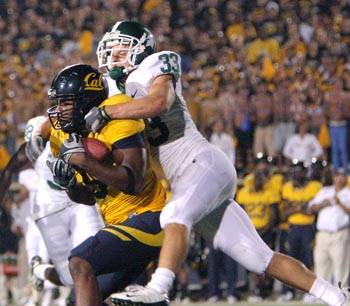 I remember watching his highschool videos when he was playing DE.  I always wondered how he would have faired as a DE.  For a while, when he was stuck behind Craig Stevens, I thought perhaps it was a bad move for him to be at TE instead of DE.  I guess I was wrong.  I'm thinking Cameron is probably around a 5th or 6th round pick.  What do you guys think?

TwistNHook:  A key game for Morrah this past year was against MSU.  Here are his numbers;

5 catches for 93 yards and 1 touchdown.  That was the first game of the year and he helped calm Riley down.  Riley had probably one of his best games of the season that day.  And, given the green-ness of the WRs, Morrah was a big part of it.

Lets look at his career stats:

Clearly, Morrah's role in the offense increased from 2007-2008.  What is interested is to note that the Yards Per Catch didn't increase by that much.  11.9 to 12.1.  So, they weren't really using him in much different ways.  They were just using him more.  And boy did it work!

Ragnarok:  Well, I'll always remember Morrah for being on the receiving end of Nate Longshore's first pass of the 2008 season.  Riley had been doing fine against Michigan State to start, but in the 2nd quarter, it was Longshore's time, and he got right down to it:  a 50-yard pass deep down the sideline to Cameron Morrah.  Everyone in the stands went nuts, and we were like, "This is going to be a heck of a quarterback competition!"  Of course, Longshore tossed an interception in the end zone 3 plays later, but I still remember that 50-yard bomb.

Honestly, how many Tight Ends even *have* 50-yard receptions on their résumé?  I can't be that many.  Personally, I always thought of Morrah as a big Wide Receiver who could block a little, rather than a small Tight End who could catch some.  You'll remember at the end of the Arizona game this past year, when Cal was down 2 scores and desperate to get anything going on offense, Tedford sent out Kevin Riley and 5 receivers split wide.  No one was positioned at tight end, but Morrah was still out on the field, split wide, simply because he was probably our best receiver last year, certainly in the top 3.  Would Craig Stevens have even been on the field in a desperation, comeback moment like this?  I very much doubt it.

HydroTech:  I think Morrah's best catch was against Arizona last year.  The pass was from Longshore rolling out to his right, and Morrah was in the back right corner of the endzone.  He jumped up, caught the ball, and got a foot inbounds - he might have even gotten both feet in.  Anyways, I think that was not only one of Longshore's best throws of the season, but also Morrah's best catch of the season.