Share All sharing options for: Spring Game 2009 Photos Part I

There comes a time in every man's life when he has to ask himself, where does our story start.  For some, it's a complicated process of internal soul-searching and endless heart to hearts.

But, for me, the emotional and mental simpleton that I am, my story starts on Sproul Plaza.  Also, my story is the story of the Spring Game 2009.  Not the overarching, global story of my life as told in allegory.  Because nobody is mentally deranged enough to want to hear that.

So, let's just stick with Sproul Plaza and that oddly-worded sign.  IF YOU WANT TO GET CAL STUDENT TO ATTEND YOUR EVENT, PAY YOU MONEY, AND SLASH OR TAKE PART IN YOUR MOVEMENT, DON'T HAVE IT INVOLVE PEOPLE INTERACTING IN TREES!  I mean I am all for team-building.  And I'm all for trees.  But, let's be honest here, we are still so raw right now.  So raw.  Emotionally.  This sign, my friends, is quite the tin-ear to our plight. 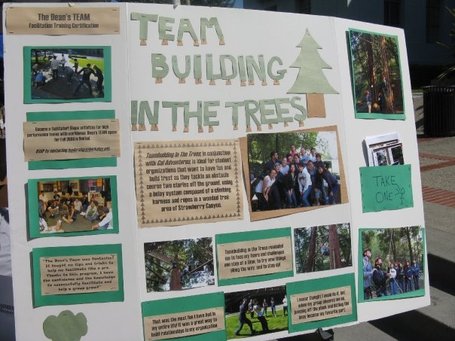 Yes, it was Cal Day.  As it is every time the Spring Game rolls around.  So, we headed over to Sproul to check out the action.

And, guess what!  I got an opportunity to read the Daily Cal.  When I found out that #1 Best Of Berkeley Editor's Choice blog:  The Daily Clog ALSO had an inky newspaper that it ran, well I just *had* to read that!!!  It even had the Best Of Berkeley issue in it!

No, she assured me.  "We" did not win.  Some other blog did.  But, at least, "we" got editor's choice.  I told her that sometimes democracy just plain didn't make any sense.  She told me that people didn't know what was best for them.  I stopped short of making a teabagging joke and, instead, just told her that I, in the LEAST insulting manner possible, really hated the Daily Clog at that point and walked off.

Berklium97 informed me that her countenance reflected nothing but the greatest scorn towards me after that comment.  In retrospect, I probably should have toyed with her more.  And sought out other Daily Cal hander-outters to toy with them, too.

But I had the Golden Overtones to watch! 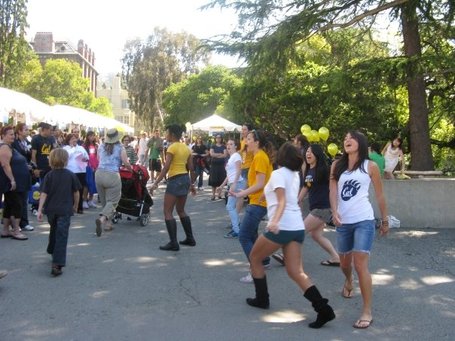 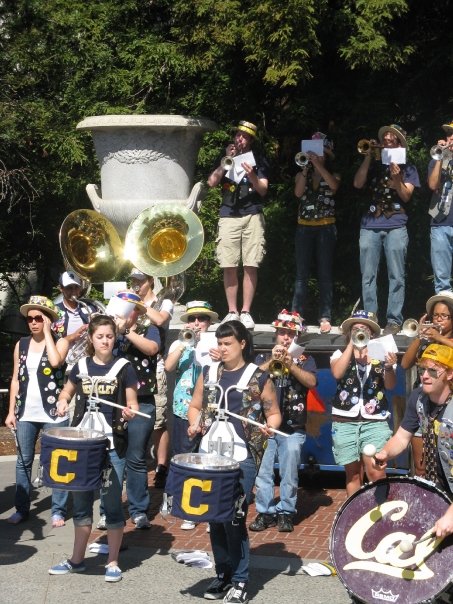 But it was almost 11:30 and there wasn't any time for the extra point.  We couldn't spend any more time in the incessant din of Cal Day.  We headed East up Mount Campus to the Stadium.  We stopped briefly to take a few photos of the work-site.  This involved me climbing up the fence, hanging off the top and sticking my hand through the barbed wire.  The things I do for you people.  All so you can get mildly upset that the DBD exists. 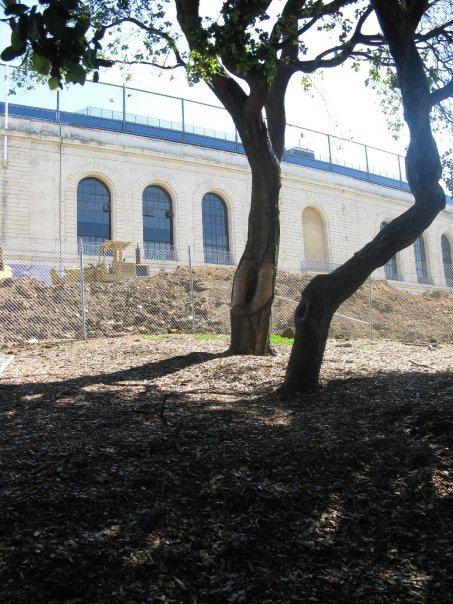 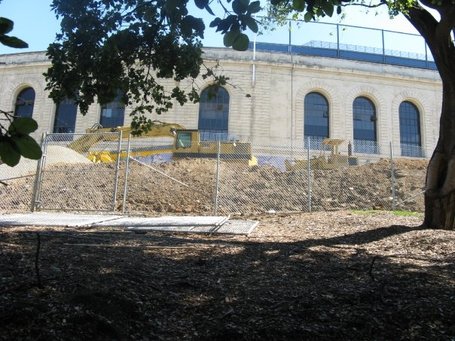 Well, there was one remnant that brought the corners of my mouth up in some modicum of bemused detachment. 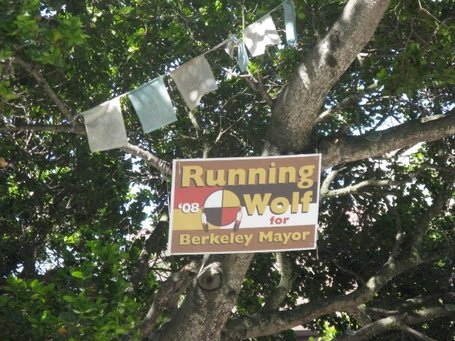 "I hope somebody invents time travel, so I can go back in time, move to Berkeley, register to vote, and then NOT vote for Runnie Dub!"

We headed into the stadium.  Our #1 concern, of course, was who would replace the Pain Train in the middle of our D.  Could Cal find somebody to take the reigns of his never-ending motor?  Clearly, we weren't the only people concerned, because apparently Coach Tedford is trying to find a way to keep Pain Train on the team no matter where Zack Follett plays next year: 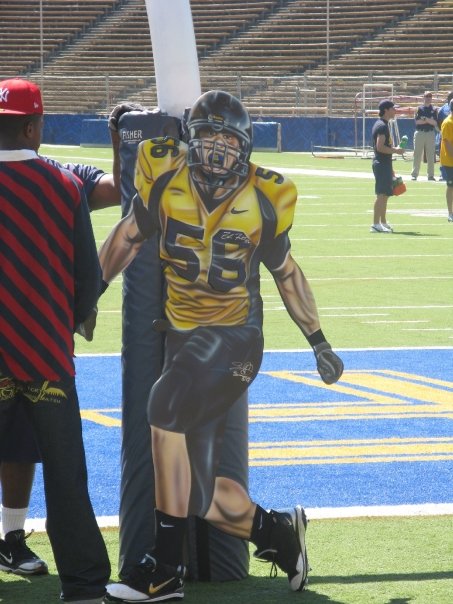 "AND LIFE-SIZE WOODCUT PAIN TRAIN HAS SACKED THE QUARTERBACK YET AGAIN!"

I really hope Life-Size Woodcut Pain Train keeps up with his academics, because he's got a bright future ahead of him.  He could even be better than Pepsi Machine!

When I got out there, the players were warming up. 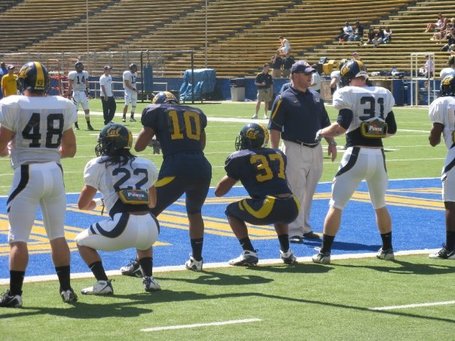 The cornerbacks quickly moved over to the left, so I followed them. 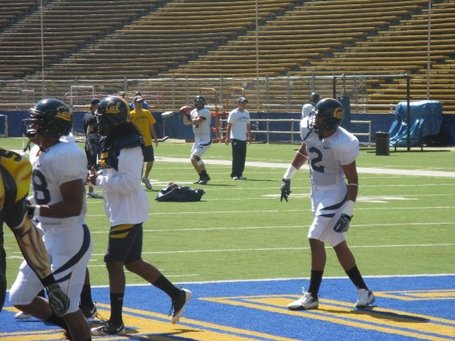 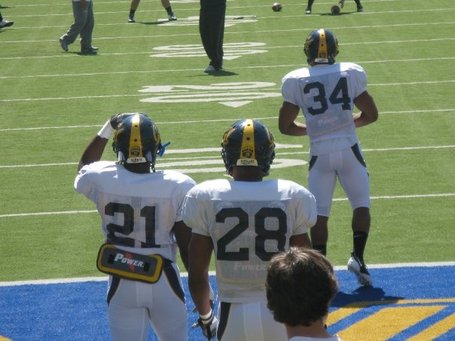 Did anybody else notice that SydGOD was wearing both a white AND blue jersey?  Can we recklessly speculate that this means he's gonna play both defense AND offense?????  I say we can! 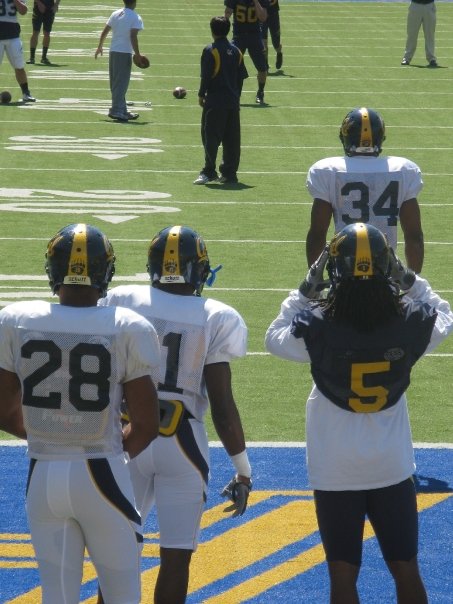 "AND SYD'QUAN HAS TORN OFF HIS BLUE JERSEY TO REVEAL A WHITE ONE UNDERNEATH AND NOW HE'S AT THE WIDE RECEIVER POSITION!  THIS IS THE MOST EXCITING, HEART-RENDERING, WAIT, WAIT, I FEEL AS IF I USED THIS CLICHE BEFORE" 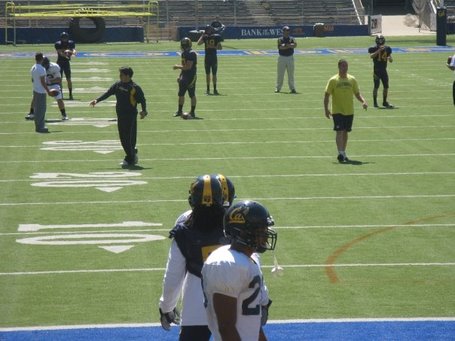 Another set of players came out of the locker room to my right, so I shuttled back towards North Tunnel: 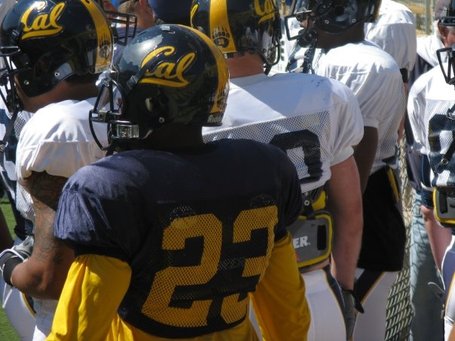 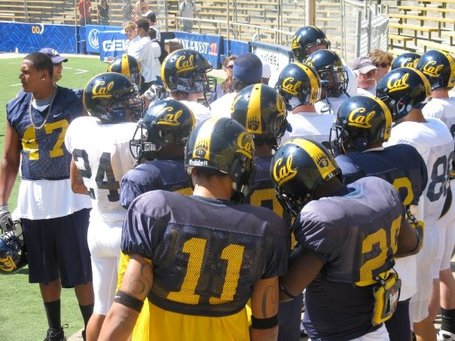 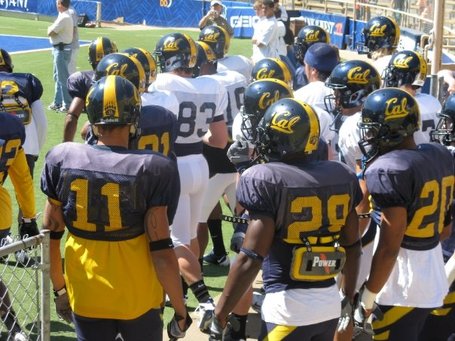 It was a little tough to determine whether #4 here was Jahvid Best.  I never actually saw his face, he was walking away from me.  He has grown his hair out a little and doesn't look quite the same.  He also looked a little too small to me. 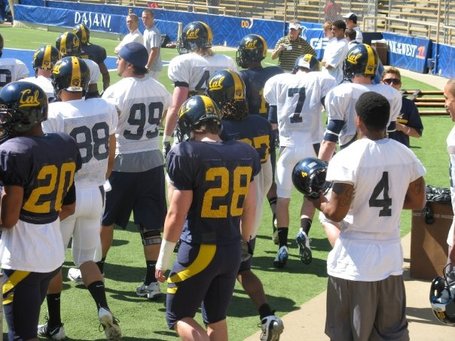 This new group started warming up and stretching out: 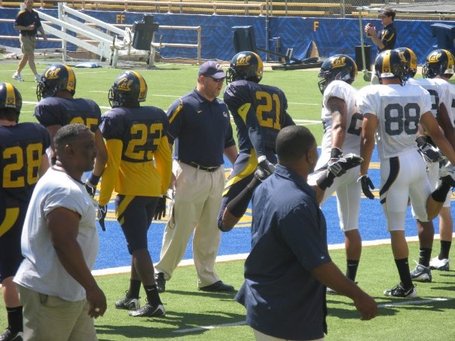 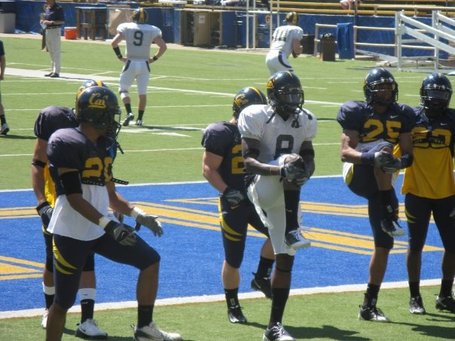 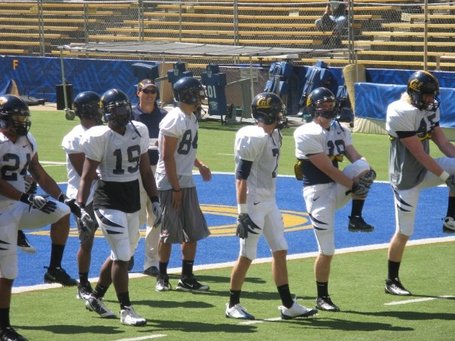 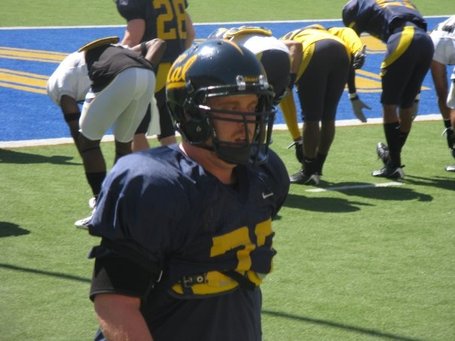 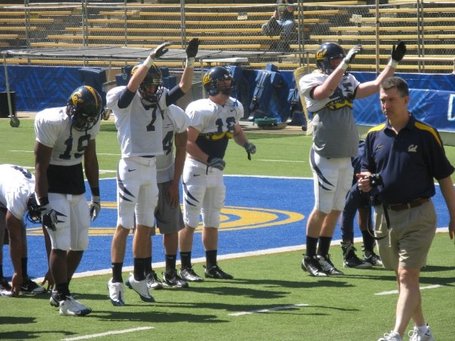 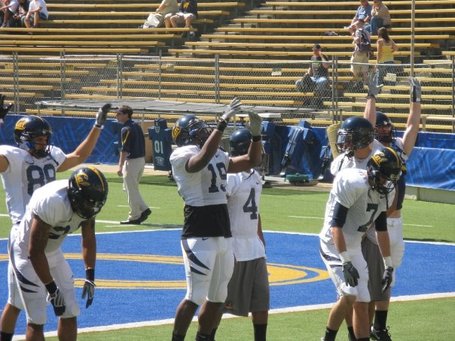 Thats as good a place as ever to stop for now.  In the next installment(s?), we'll have more warm up photos, no photos of formations in any way shape or form and an Alex Mack nWo-style run-in.  GO BEARS!